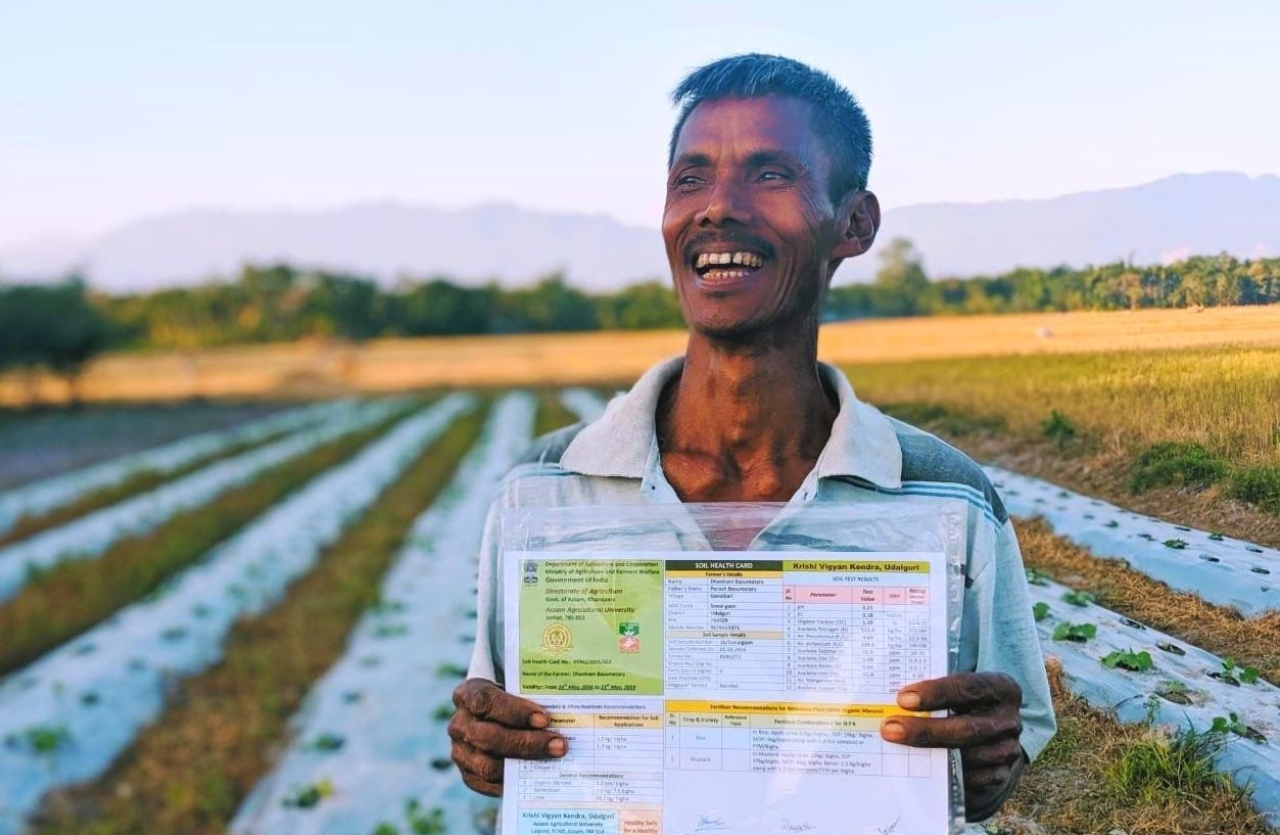 A farmer with his soil health card. (NITI Aayog/Twitter)

One of the first policy initiatives of the Narendra Modi government soon after it came to power in 2014 was to launch the soil health card scheme.

The scheme launched in 2014-15 to address the decline of soil nutrients and promote balanced use of fertilisers has begun yielding results.

According to a study by National Productivity Council, it has brought in two gains for the farmers: first, it has cut the use of chemical fertiliser by 8 to 10 per cent. Second, it has improved the per acre yield by 5 to 6 per cent.

The Press Information Bureau issued a press release on Wednesday (5 February) stating that the so far the scheme has been implemented in two stages.

In the first stage, 10.74 crore soil health cards were distributed and in the second phase, launched in the last two years, 11.69 crore such cards have been issued to farmers.

Understanding the concept that soil health and its fertility is the basis of sustainability for the farmers, the National Democratic Alliance (NDA) government launched the soil health card scheme to ensure optimal use of fertilisers.

The issue with Indian farming is that growers tend to use more of nitrogen in the NPK (nitrogen, phosphorous and potassium) combination. Farmers used NPK in the ration of 6.2:2.4:1 against an ideal ratio of 4:2:1.

As early as in 2017, the National Institute of Agricultural Management submitted a report to the Ministry of Agriculture and Farmers’ Welfare that costs of cultivation for farmers had dropped on lower fertiliser usage and a significant rise in the use of gypsum and other micro-nutrients.

The study said two-thirds of the farmers it had interviewed were happy with the scheme and the awareness among them was good.

It said that 66 per cent of the farmers understood the recommendations on soil health, 57 per cent found it suitable and 53 per cent were able to follow them.

It said there was a 20-30 per cent drop in the usage of urea and di-ammonium phosphate in paddy and cotton cultivation, while cultivation costs dropped by Rs 1,000-4,000 per acre.

This had resulted in farmer income rising by 30-40 per cent since the introduction of the soil health card, the study found.

Through the soil health management Scheme the Centre is also creating jobs for the agrarian youth. Under the pilot “Development of Model Villages” scheme, village youth and farmers up to 40 years of age can set up soil health laboratories and undertake testing.

The cost to set up a laboratory is Rs 5 lakh with the Union and state governments funding 75 per cent of it. Self help groups, farmers’ cooperative societies, farmers’ groups and agricultural producing organisations can also set up labs under this scheme.

Under the development of model villages, the soil composition will be analysed once in two years to help farmers take remedial measures to improve soil nutrients.