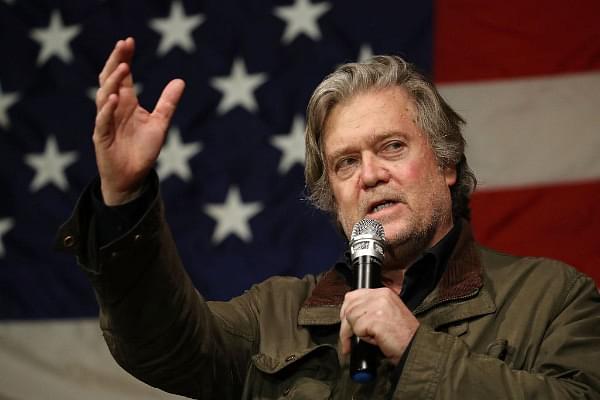 Steve Bannon, an influential political strategist who is widely regarded as the architect of President Donald Trump’s 2016 electoral triumph, has said that virologists from the Wuhan-based laboratory have ‘defected’ and are working in tandem with Western intelligence agencies to build a case against Beijing for its early cover-up of the pandemic.

In an exclusive interview to Daily Mirror, Bannon said that Chinese scientists who have defected to the west are building a case against Beijing on the basis that the global pandemic had been caused by a leak from the Institute of Virology in Wuhan and that the subsequent cover-up had amounted to ‘pre-meditated murder’.

Institute of Virology in Wuhan has emerged as focal point of several speculations on the origin of novel coronavirus.

Describing Wuhan a ‘biological Chernobyl’, Bannon said these scientists have been providing evidence of China’s Communist Party’s role in the COVID-19 pandemic.

Bannon added that defectors are currently working with intelligence agencies in America, Europe and the UK, which have been assembling evidence to challenge the Communist party’s claim that the pandemic originated in a wet market and not in a lab home to scientists. Allegations have emerged that scientists as part of their research work had manipulated bat coronavirus to be more transmissible to humans.

"I think that they [spy agencies] have electronic intelligence, and that they have done a full inventory of who has provided access to that lab. I think they have very compelling evidence. And there have also been defectors," Bannon said.

"People around these labs have been leaving China and Hong Kong since mid-February. [US intelligence] along with MI5 and MI6 are trying to build a very thorough legal case, which may take a long time. It’s not like James Bond." he added.

Bannon has been repeatedly advocating that Western countries should work together to bring down the ‘brutal, authoritarian’ Chinese regime told the British tabloid that China was conducting experiments in the lab and the virus got out from there either through an inadvertent mistake or through a lab technician. The influential ideologue who has been vociferous critic of Chinese communist party has close ties to Guo Wengui, an exiled Chinese billionaire.

‘”Regardless of whether it came out of the market or the Wuhan lab, the Chinese Communist party’s subsequent decisions hold them guilty of pre-meditated murder.” Bannon said in the interview.

Bannon pointed out that Taiwan formally informed the WHO on December 31 that there was some sort of epidemic coming out of Hubei province [where Wuhan is]. He added that CDC in Beijing was informed on January 2 or 3, and they decided to withhold that information and then sign a trade deal [with the US on January 15].

‘If they had been straightforward and truthful in the last week of December, 95 per cent of the lives lost and the economic carnage would have been contained.” Bannon added.

Last week, Dr. Li-Meng Yan, a highly regarded Chinese virologist who fled Hong Kong and seeking refuge in US, said that the Chinese government knew about COVID-19 long before they claim they did.

Dr. Yan, who worked in the University of Hong Kong School Of Public Health focusing on research in influenza viruses and pandemics, also accused her supervisors - some of the top experts in the field -of ignoring the research she was conducting which she claims could have potentially saved lives.