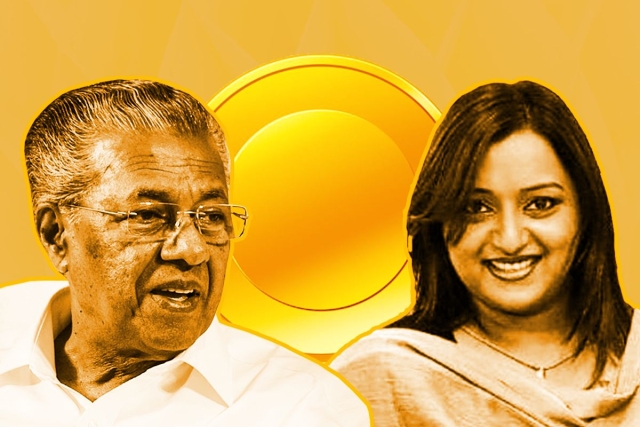 Call records of Swapna Suresh, the main accused in the gold smuggling case in Kerala, have revealed that she was in touch with several leaders of the ruling Left Democratic Front (LDF) in the state.

Several central agencies have now begun to scrutinise the gold smuggling case since it has nationwide ramifications and as part of these inquiries, the call records of Swapna, who is currently on the run, are being examined.

Local media reports said Swapna has made calls to state ministers, members of Parliament and members of legislative assembly. Speaker of the Kerala Assembly P Sreeramakrishnan’s name has also been dragged into this episode.

New lists are emerging and many belonging to the Communist Party of India-Marxist (CPI-M) could be put in a spot by these, the reports said. A CPI-M member is also reportedly involved in this.

A trade union leader with political connections and with links to the Customs Department has also reportedly helped in the smuggling. Details on this are awaited.

The case could have political ramifications, too, and the key accused is reported to have links with many higher up officials in the state, Malayalam daily Malayala Manorama reported.

The key accused, who faked her identity as a staff of the UAE consulate, had made over 10 calls on a single day to some officials.

The Customs Department is looking into the whole episode of gold smuggling in which Swapna, who had been expelled earlier from the UAE consulate, and former UAE Consulate public relations officer Sarith, also expelled by the consulate, were the kingpins.

The Central Bureau of Investigation (CBI), Intelligence Bureau, Enforcement Directorate and National Investigation Agency (NIA) are looking if there are any other links that could have compromised the country’s security or resulted in any anti-national activity.

Sarith Nair, who is under the Customs Department’s custody, has confessed that gold had been smuggled at least 15 times. If one were to go by the current episode in which 30 kg of gold valued at Rs 3.5 crore was attempted to be smuggled into the country, then the amount involved could be huge.

Swapna, who has moved the Kerala High Court seeking anticipatory bail, had used her fake identity to smuggle gold through diplomatic baggage. Baggages meant for diplomats are usually not closely scrutinised and the smuggling team took advantage of this.

The gang had reportedly used actors, who were sent to the UAE for programmes, to smuggle gold into the country. Swapna had made use of her political connections to free actors or the gang’s carriers, who had gotten into trouble.

Another person emerging as a key figure in the smuggling episode is Sandeep Nair, brother of Sarith.

Sandeep is seen as Swapna’s benami and his mother told the media that he is a member of the CPI-M.

Starting off his career as an employee at a timber shop, he made quick money mysteriously. He opened an automobile workshop that was inaugurated by the Kerala Assembly Speaker, an event which Swapna too attended.

Sreeramakrishnan told the media that Swapna invited him to inaugurate the workshop.

In a statement that could be more damaging to the accused, Sandeep’s wife told the customs officials that her husband and Sarith were involved in operations to smuggle gold.

She said both of them had visited Dubai recently and had smuggled gold. Records now show that Sandeep was arrested in 2014 for smuggling gold.

The gold smuggling case came to light after customs officials seized 30 kg of the yellow metal at Thiruvananthapuram airport last week on a tip-off. This has left a trail of destruction with the CPI-M-ruled Kerala government bearing the brunt.

When customs officials began to zero in on Swapna, calls went from Chief Minister Pinarayi Vijayan’s office to let her off the hook. Following this revelation, Principal Secretary M Sivasankar, who also looked after the IT portfolio, was removed from the Chief Minister’s office.

Sivasankar, seen as the key for appointment of Swapna to Space Park, has subsequently gone on a year’s leave.

Vijayan has denied any role of his government or party in the smuggling case and has said that he was prepared for any investigation.

But opposition parties, led by the Congress and Bharatiya Janata Party, have upped the ante and are demanding his resignation.