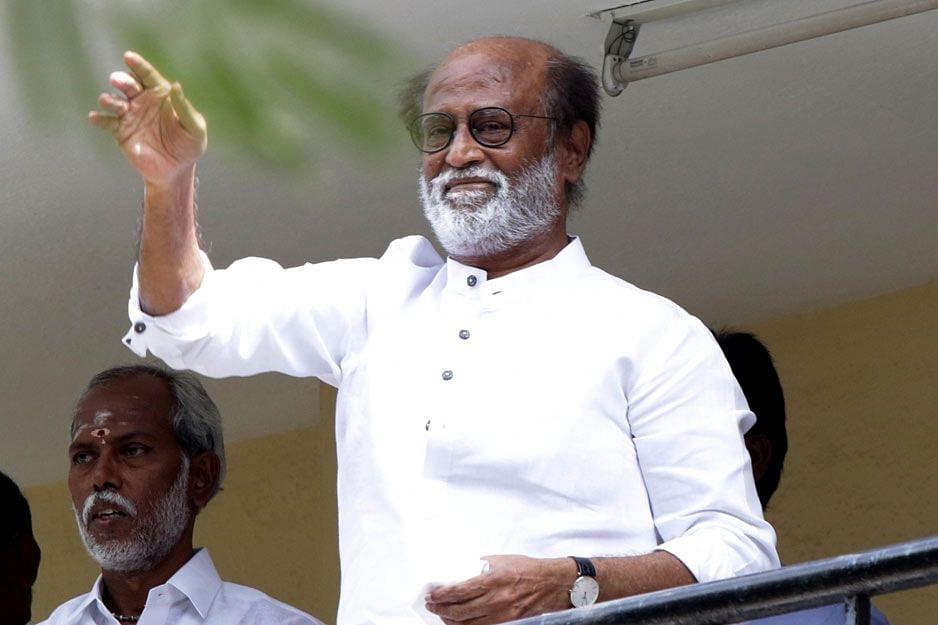 Superstar Rajinikanth waves at his supporters from the balcony of his house in Poes Garden.

Tamil film superstar Rajinikanth today (3 December) created a political storm by announcing his entry into Tamil Nadu politics, even as the state’s southern districts were threatened by Cycline Burevi.

Addressing the media, Rajinikanth, who had announced in December 2017 that he would enter politics to launch his own party and contest all the 234 elections to the state assembly due in April next year, said the “day for Tamil Nadu’s destiny to change has come”.

“Every country (state) has a destiny and Tamil Nadu’s date with destiny has come. The time has come to change Tamil Nadu’s politics and administration,” the actor, clad in white kurta-pyjama, told the media from his Poes Garden residence in heart of Chennai metropolitan city.

Stating that a political change in Tamil Nadu was important and it was the “compulsions of time”, he said, “if we cannot change now, we can never change it”.

Rajinikanth said he wanted to launch his party after creating an awakening among the people but the spread of the novel coronavirus pandemic prevented him from touring the state.

Stating that he had problems relating to his health, especially, kidney, the superstar said doctors had warned him that he could be affected by the pandemic since his immunity was low.

“I remember how people’s prayers had saved me when I was hospitalised in Singapore a few years ago,” he said, indicating that he wanted to do something in return for the people.

“Even if I lose my life (campaigning for his party and for a change), I am not worried. I am only a tool in the hands of people. If I win, it is people’s. It I lose, it is theirs,” Rajinikanth said.

Reminding of his statement to launch his own party, he said that he would never go back on his word and sought the support of the people in his new endeavour.

He said 40 per cent of his latest movie Annathai (big brother) had been completed and he would have to keep his commitment to it.

“I will complete it and then focus on party work, which is a gigantic (rakshasha) task,” the superstar said, announcing that Tamilaruvi Manian would be the organiser supervising the activities, while technology expert R Arjun Murthy would coordinate party affairs.

Manian told the media that Rajinikanth chose to launch his party and usher in a political change since the actor wanted express his gratitude to the people of the state.

Manian, an ardent follower of the late K Kamaraj and founder of Gandhiya Makkal Katchi, had helped the Bharatiya Janata Party (BJP) to reach out to other parties in Tamil Nadu to strengthen the National Democratic Alliance.

He is among those who favour Rajinikanth forming an alliance with the BJP.

Earlier in the day, Rajinikanth tweeted that he would announce on 31 December details of party launch next month.

The announcement has stunned political circles that were a little uncertain of his entry given his recent vacillations.

Political observers see his entry as a big blow to the Dravida Munnetra Kazhagam, which is nursing hopes of regaining power in the state.

Rajinikanth’s announcement also saw the trend #tamilnadumudhalvartamizharae (only a Tamil can be Tamil Nadu chief minister) on social media. The superstar is a non-Tamilian, hailing from Maharashtra and growing up in Bengaluru.