Thousands Of People From UK, Australia And France Take To Streets In Protests Against Crucial Covid-19 Measures 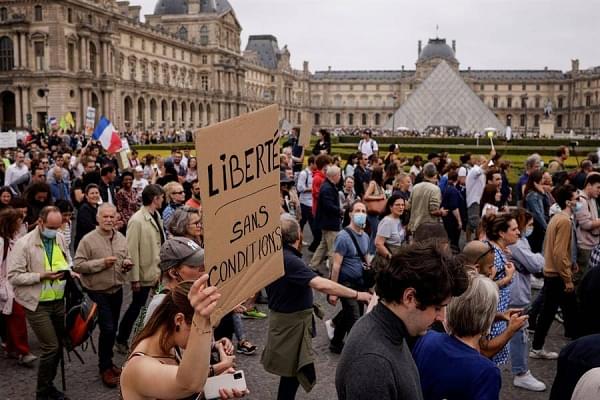 An anti-Covid restriction protest in France.

After the coronavirus pandemic hit the world and experts began their research to find a vaccine or treatment, the world noticed a boom in anti-vaccine social media posts. Now, tens of thousands of people across several countries are protesting against Covid-19 restrictions.

In France, an estimated 160,000 people flocked to the streets in nationwide protests against President Emmanuel Macron's health legislation, which will restrict unvaccinated people from accessing restaurants and other public places.

The protest in Paris led the French police to use tear gas and water cannon to disperse protesters who were chanting “freedom, freedom” while carrying placards saying “Macron, Tyrant”, “Big Pharma shackles freedom” and “No to the pass of shame”.

Last week, protests erupted across Italy in response to the government's announcement that a health passport, also known as a “green pass”, would be required for entry to venues such as restaurants, gyms, and cinemas.

Protests were held in dozens of towns and cities across Italy after Italian Prime Minister Mario Draghi on 22 July announced an expansion of the country's health passport scheme and urged people to get vaccinated or face a new lockdown.

As reported, one placard held up outside Milan’s cathedral during the protests read “better to die free than live like slaves!”.

Thousands of people have also demonstrated in London, claiming that their civil liberties are being eroded. Demonstrators claim that the United Kingdom government's track and trace app is restricting their movements, with over 600,000 people being told to self-isolate in only one week this month.

The demonstrations take place just a week after the majority of coronavirus restrictions in the country were relaxed. As reported, Metropolitan Police in the United Kingdom said that six people were arrested and four police officials were injured during the anti-lockdown, as well as the anti-vaccine demonstration which took place in Central London on 24 July.

Heidi Larson, who is a professor of anthropology, risk and decision science at the department of infectious disease epidemiology at the London School of Hygiene and Tropical Medicine said: “Ironically, for those who want their freedoms, the vaccine can allow different freedoms. When you think about it, the options to the [green] pass is that we close restaurants, we stop large gatherings. We have to give somewhere if we want to get ahead of this virus.”

After an unapproved march in Sydney, Australia, dozens of demonstrators were arrested. The protest had been dubbed a "freedom" rally by organisers.

“Wake up Australia” and “Drain the Swamp” were written on signs and banners held by attendees. On 24 July, thousands marched through Sydney to demand an end to lockdown measures, with smaller demonstrations taking place in Melbourne and Brisbane.

As of now, according to reports, at least 57 people have been charged in connection with the Sydney demonstration, and more than 500 have been fined. While in the wake of an increase in Covid-19 cases, Australian politicians have condemned anti-coronavirus protests, New South Wales (NSW) Premier Gladys Berejiklian said these protesters should be “ashamed”.

Berejiklian also said: "Millions and millions of people across our state are doing the right thing and it just broke my heart that people had such a disregard for their fellow citizens."

Meanwhile, Australian Prime Minister Scott Morrison addressed those people who took part in Saturday's demonstrations as "selfish" and "self-defeating", while saying that the protests "only risk the lockdowns running further."

But this is nothing new. The world has been seeing similar protests since the virus started to show its dominance around the world, forcing international authorities to announce stricter Covid-19 measures including lockdowns.

Gabriel Scally, who is a visiting professor of public health at the University of Bristol, said: “All the way through the pandemic, we have seen small groups of people who have taken to the streets to express their opposition to various things. Some believe that the virus does not exist, that Covid-19 doesn’t exist. Some think that it’s a conspiracy from all sorts of people, including Bill Gates.”

“There has been opposition to vaccines in history. It is new and people are dealing with various issues. There are always a small group of people who are opposed,” added Scally.