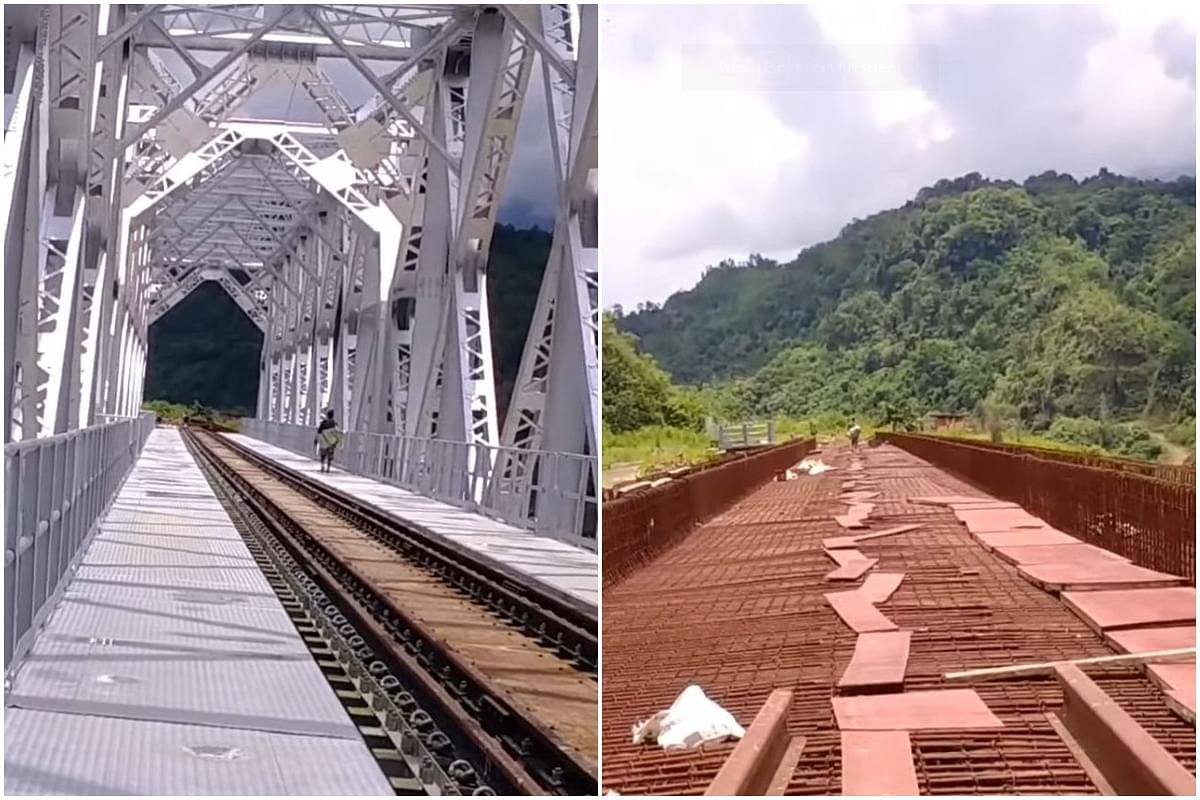 Work in progress on bridge numbers 40 and 41 as part of Northeast Frontier Railway initiative to connect Jiribam and Imphal.

In a mission mode, Indian Railways has stepped up efforts to connect all capital cities of all North-East States — Assam, Arunachal Pradesh, Tripura, Manipur, Mizoram, Nagaland, Meghalaya and Sikkim — with the main rail network.

Out of eight, the capital cities of Assam, Arunachal Pradesh and Tripura have been connected with IR networks and work is in progress on the remaining five states, said Northeast Frontier zone General Manager Anshul Gupta.

In Manipur, the project of broad gauge (BG) line connectivity from Jiribam to Imphal (110.62 km) in the state was sanctioned in 2003-04. The latest anticipated cost of the project is Rs 13,056 crore.

The section from Jiribam to Vangaichungpao (12 km) was commissioned in March 2017 and work from Vengai Kung Pao-Tupul- Imphal (98.62 km) has been taken up.

This project is likely to be completed by December 2023, Gupta said.
In Mizoram, the project of BG line connectivity from Bhairabi to Sairang (51.38 km) (suburban city of Aizawl, the capital city of Mizoram, was sanctioned in 2008-09).

In Nagaland, the project of BG line connectivity from Dimapur (Dhansiri) – Zubza (Kohima) (82.50km) was sanctioned in 2006-07. Cost of the project is Rs 6,912 crore and the work speeded up from September 2018. The section from Dhansiri to Sukhovi (16.5 km) has been commissioned and the balance section work is in progress.

This project is likely to be completed by March 26.

The 10-km length of the project falling in Assam, from Tetelia to Kamalajari got completed in October 2018.

New BG line from Byrnihat to Shillong (108.40 km) was sanctioned in 2010-11. The latest anticipated cost of the project is Rs 4,083 crore. The target date shall be declared once the complete land is physically handed over to the Railways.

Once completed, travelling by train to these state capitals from other parts of the country such as Delhi, and Mumbai will provide savings in time of about 6-8 hours than as of now.

In Arunachal Pradesh, the Railways is also developing a toy train-based theme park project in Tawang district at a lake about 14 km towards Bumla pass for developing tourism and recreation facilities for our soldiers jointly with the state government of Arunachal Pradesh.

The Northeast Frontier Railway is working towards a vision to provide safe and punctual rail transport, accelerate economic development in the northeast and growth of multimodal transport systems and to promote tourism in the NE region, said Gupta.

The first meter gauge train in the northeast started from Dibrugarh to Jeypore road on May 1, 1882. The Assam Bengal Railway (ABR) was thereafter formed and connected the port of Chittagong with upper Assam
in 1892.

In August 1947, the ABR network got disrupted from the rest of India.

Subsequently, the Assam Rail Link Project linking Assam to the mainland was completed in January, 1950.

In 1951, Assam Railway and Avadh Tirhut Railway merged to form part of the North Eastern Railway with headquarters at Gorakhpur. Finally, on January 15, 1958, the Northeast Frontier Railway was carved out with its
headquarters at Maligaon.

Northeast Frontier Railway covers 10 states with a 4,254.99 route km. The Railway network passes through very difficult terrain but very scenic and beautiful landscapes with a large number of tunnels including 127 under construction; along with the highest number of bridges (7,785).

The Northeast Frontier Railway is famous for having the longest train journey by Vivek Express which takes 74 hours and 35 minutes to reach Kanyakumari from Dibrugarh and the longest Rajdhani Express journey to reach Dibrugarh from New Delhi which takes 41 hours and 43 minutes.

Two Vistadome services on its narrow network from Siliguri-Alipurduar and Guwahati–Haflong sections have become very popular.

Vistadome services from Naharlagun (Itanagar) to Dibrugarh and Guwahati to Naharlagun are also being planned.