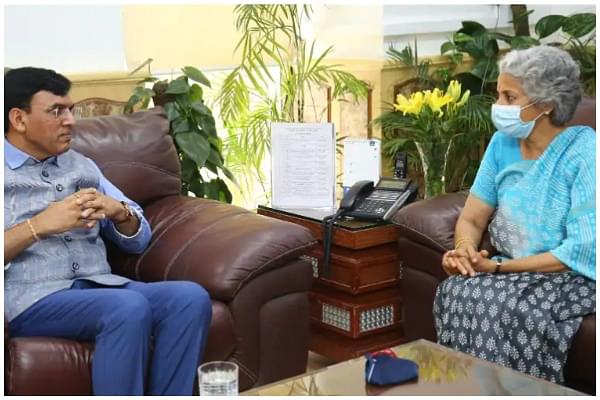 Mansukh Mandaviya, the Union Health Minister, met with World Health Organization (WHO) Chief Scientist Dr Soumya Swaminathan on 12 August. The major point of their discussion was about the UN health agency's approval of Bharat Biotech's Covaxin.

The National Institute of Pharmacy and Nutrition in Hungary granted clearance, validating the GMP for the production of Covaxin.

The Hyderabad-based company said that with this approval, Bharat Biotech has reached another key milestone in inventing, as well as manufacturing vaccines at global quality standards and pushing forward in the ongoing fight against the Covid-19 pandemic.

However, after the meeting with Swaminathan, the health minister tweeted: “Held a meeting with Dr Soumya Swaminathan, Chief Scientist of @WHO. We had a productive discussion on WHO’s approval of @BharatBiotech’s COVAXIN. @DoctorSoumya also appreciated India’s efforts for the containment of #Covid-19.”

As per early reports, Bharat Biotech submitted the essential documents for Covaxin's emergency use listing (EUL) to the WHO by 9 July and the Geneva-based health body's assessment procedure has already begun.

Hindustan Times reported that a senior government official familiar with the situation said: “The discussion was fruitful. The EUL process is on track, and the approval should come through soon. There’s a due process that needs to be followed, which takes its own time.”

As per the report, the Union Minister of State for Health and Family Welfare, Bharati Pravin Pawar, confirmed that the vaccine data review process was underway by the WHO. She also noted that the global health agency usually takes up to six weeks to decide on EUL submissions.

The EUL of the World Health Organization is required for COVAX Facility vaccine supply to other countries. It evaluates the Covid-19 vaccines' quality, safety and efficacy, as well as risk management measures and programmatic suitability, such as cold chain requirements.

The assessment is carried out by the product evaluation group, which is made up of regulatory experts from all over the world, as well as a Technical Advisory Group (TAG), which oversees performing the risk-benefit analysis for an independent recommendation on whether a vaccine can be listed for emergency use and, if so, under what conditions.

As of now, a total of six vaccines have received EUL from the WHO.

According to reports, the WHO Assistant Director-General for Vaccines, Mariangela Simao, stated that the UN health agency's evaluation of Covaxin was "quite advanced" and officials hoped for a decision by mid-September.

Bharat Biotech developed this vaccine after collaborating with the National Institute of Virology and the Indian Council of Medical Research (ICMR).

Approved for emergency use on 3 January this year, Covaxin’s clinical trials have shown that the jab has an efficacy of about 78 per cent. To increase the production of Covaxin, Bharat Biotech has repurposed its Ankleshwar-based Chiron Behring manufacturing factory which is used for producing anti-rabies vaccines.

A source told Hindustan Times that the “decision to manufacture Covaxin at Ankleshwar, Gujarat, was taken several months ago with planning and preparatory activities. Facility preparations and production activities commenced during June 2021, and the product will be available for supplies during September 2021”.

Bharat Biotech said in June that its American partner, Ocugen, had received a recommendation from the Food and Drug Administration (FDA) in India to pursue the Biologics License Applications (BLA) path for Covaxin, which means a full approval.

Vaccine applications must follow the BLA process, which is the industry standard.

However, recently in India, a trial combining Covaxin and Covishield vaccines has been approved by the Drugs Controller General of India (DCGI).

This announcement came after research was conducted on 18 people, in which the ICMR discovered that combining Covaxin and Covishield — the Indian version of Oxford-AstraZeneca jab — yielded higher safety and immunogenicity outcomes.

Studies are being conducted around the world to see if combining two distinct vaccines can outperform two doses of the same jab.

Experts warn, however, that mixing should not be done arbitrarily, but rather based on a thorough understanding of multiple issues.