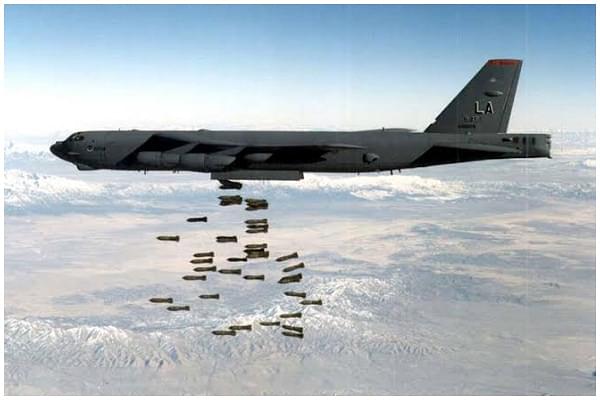 A B-52 bomber in action in Afghanistan.

Amid increased control by the Taliban over Afghan territory, the US Air Force has intensified its retaliatory strikes.

Following President Joe Biden's orders, Boeing B-52 and AC-130 gunships of the US have inflicted serious damage upon Taliban positions in north Afghanistan.

The joint operations of the Afghan National Defence and Security Forces (ANDSF) and the US Air force have debilitated the Taliban stranglehold in the provinces of Nimruz, Jowzjan, Kandahar, Herat, Sar-e-Pol, Helmand and Kunduz.

The Afghan Defense Ministry spokesperson, Fawad Aman, informed that 579 Taliban terrorists have been terminated in the last 24 hours.

The Afghan government informed that while special forces are still combating Taliban terrorists in Kunduz, Herat and Lashkargah, the Taliban attacks on Kod-Barq area of Dehadi district and Pul-Khomri, the capital of Baghlan province, have been repulsed.

The Taliban, on Sunday, captured Kunduz of northeast Afghanistan, the third provincial capital in the last three days. According to a BBC report, the Taliban claimed to have taken control of the police headquarters, the governor's compound, and the city prison.

Only the airports and defense bases are currently under government control.

Earlier, the Taliban had captured Sheberghan, the provincial capital of Jowzjan, and Zaranj, the capital of Nimruz province. Many defence forces, government officials and innocent civilians have lost their lives as a result of the Taliban's relentless violence and the reciprocal operations.

Jaishankar tweeted that "Rapid deterioration of the security situation is a serious matter. A peaceful and stable Afghanistan requires that the rights and interests of all sections of the society are promoted and protected."

Since the US announced the withdrawal of all its troops by August end, the Taliban has unleashed offensive seizure attacks across the country. But despite heavy loss of lives and property, and grave human rights abuse of the Afghan population at the hands of Taliban terrorists, President Joe Biden seems resolved towards his decision of US withdrawal from Afghanistan by the end of this month.

In such a situation, "the mismanaged and exhausted Afghan forces will have to retake their cities on their own, or leave them to the Taliban for good", reports NYT.

The truncated retaliatory response of the US troops against the Taliban on Sunday explicated the near end of US' combat missions in Afghanistan.

However, it is highly probable that the US might have to alter its strategy in case the Taliban forces make deep inroads into Kandahar, or even Kabul, where the United States maintains an embassy with some 4,000 people.