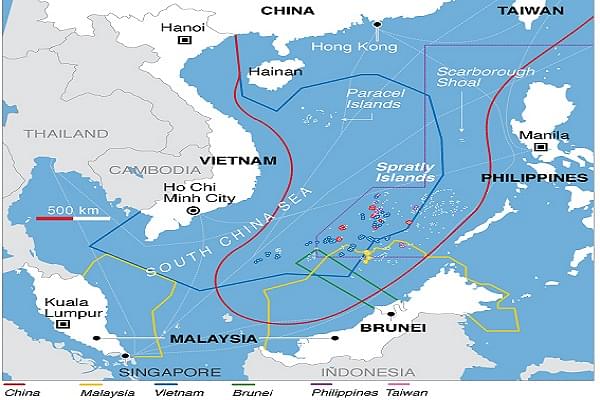 Slamming Chinese government for its "campaign of bullying" to control its maritime claims in the South China Sea, the United States has said that Beijing's claims to offshore resources across most of the disputed region are "completely unlawful".

"The United States champions a free and open Indo-Pacific. Today we are strengthening U.S. policy in a vital, contentious part of that region — the South China Sea. We are making clear: Beijing’s claims to offshore resources across most of the South China Sea are completely unlawful, as is its campaign of bullying to control them," US Secretary of State Mike Pompeo said in a statement on Monday (13 July).

Pompeo said that the US seeks to preserve peace and stability and uphold freedom of the seas in a manner consistent with international law in the South China Sea.

He added that "any attempt to user or force to settle disputes" will be opposed by the US.

"We share these deep and abiding interests with our many allies and partners who have long endorsed a rules-based international order," he said.

"These shared interests have come under unprecedented threat from the People’s Republic of China (PRC)," Pompeo added.

He asserted that Chinese government's predatory world view has no place in the 21st century.

Pompeo said that the US was aligning its position with that of a 2016 decision by a United Nations tribunal that sided with the Philippines against China's claims that it had historic and economic claims to much of the South China Sea.

The Tribunal in a unanimous decision "rejected the PRC’s maritime claims as having no basis in international law", the top US diplomat noted, adding that,"As the United States has previously stated, and as specifically provided in the Convention, the Arbitral Tribunal's decision is final and legally binding on both parties".

"Any PRC action to harass other states' fishing or hydrocarbon development in these waters - or to carry out such activities unilaterally - is unlawful," Pompeo said.

"The world will not allow Beijing to treat the South China Sea as its maritime empire," the top US diplomat asserted.

He said that the US stands with its Southeast Asian allies and partners in protecting their sovereign rights to offshore resources, consistent with their rights and obligations under international law.

"We stand with the international community in defense of freedom of the seas and respect for sovereignty and reject any push to impose “might makes right” in the South China Sea or the wider region," he added.