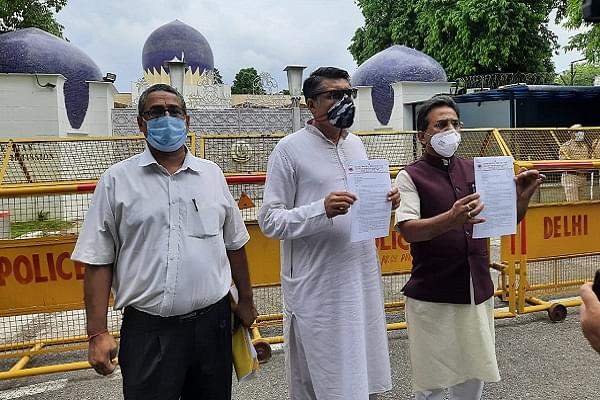 A delegation from the Vishva Hindu Parishad handed over a memorandum to the High Commissioner of Pakistan in New Delhi urging, that the idols reportedly found in the Multan court premises, in Pakistan, last week, be returned to India.

The VHP added in its statement that the good gesture will "strengthen" the relationship of India and Pakistan as neighbours.

Swarajya spoke to a senior VHP representative prior to the delegation's visit to the High Commission of Pakistan.

It indicates that the VHP fears that the idols will be vandalised/destroyed if they remained in Pakistan.

The mood and tone in the memorandum seemed gentle and friendly.

"If H.E. helps us in hand over the Idols of Hindu deities to our High Commission of India we are thankful to the Pakistan Government from bottom of our hearts. This step will also help in built relationship and bring harmony between the two neighbouring nations and citing a great example for extending friendship from the Government of Pakistan... (sic)," VHP added in the statement.

The three member VHP delegation given a memorandum to the high commission of Pakistan in New Delhi to hand over the idols to the Indian high commission in Pakistan so that we could bring them in Bharat for worship. pic.twitter.com/hAjQtzVzK9

The memorandum mentioned information based on reports in the Pakistani media.

It said, "The Zila council official has said that he heard labourers found some old documents and coins which are precious or may be of archaeological value stored inside Multan Malkhana including the idols of the Hindu deities."

VHP confirmed to Swarajya that it was making the demand on the basis of the information in the news reports.

The memorandum also carried details on the said Malkhana in Multan, which, the memorandum mentions, "was built before partition and is located exactly behind a structure once used as court of Special Judge Anti-Corruption which now stand demolished (sic)..."

Addressing the memorandum to Moin-ul-Haque, the VHP cited a number of links to reports on the matter in the Pakistani media. Saying that it has "come to know through print media", the VHP shared photos as given in sections of Pakistani media, reports on the "discovery of treasure in Multan", the reported sealing after the said discovery, and a video here.

The VHP said: "Prima-facie the said treasure looks like of Erstwhile Indian State/Kingdom, however, we are requesting you to allow us to take the possession of Hindu deities only as our faith is priceless here. Once the Idols are handed over to us, we will bring them to India and place them in a temple as per Hindu rituals (sic)."

The motive behind the move is to bring the idols home so that "hum unko samman poorvak pratishthit kar sakein (we provide them an honourable installing and place as per Sanatan values)."

The VHP representative told Swarajya that it was a simple matter and not a complicated one and the role of the Ministry of External Affairs could come into play when Pakistan accepts the request from VHP.