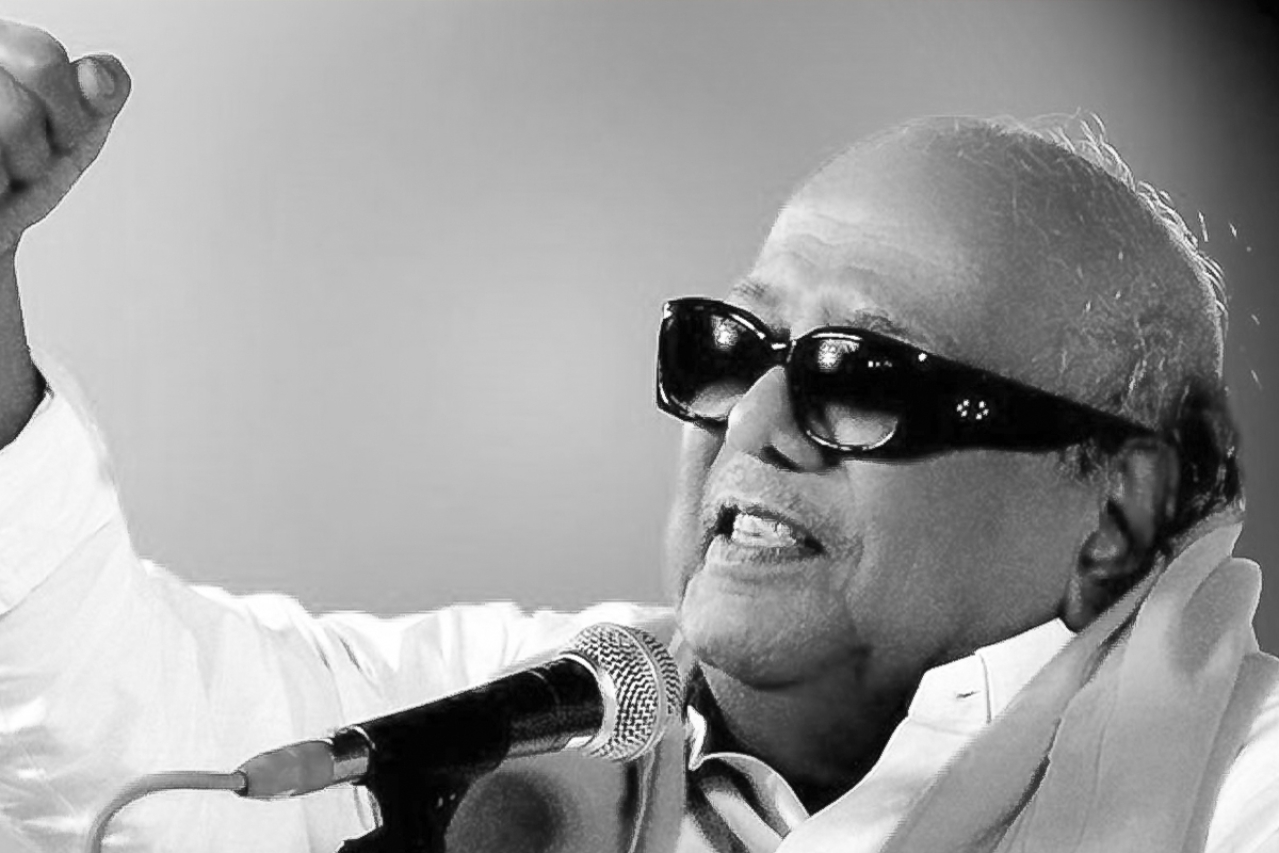 M Karunanidhi was a master Machiavellian politician in a democratic environment.

When Maniratnam made his movie Iruvar in 1997, Muthuvel Karunanidhi was the chief minister of Tamil Nadu. The movie was a quasi-historical one, retelling the story of the Dravidian movement. Maniratnam made a tactical casting choice in his movie. His choice for the character that was very similar to Karunanidhi was Prakash Raj, who had already established himself in Kollywood as the quintessential villain along the lines of Nambiar and Nassar. For the character that was very similar to M G Ramachandran (MGR), the director chose Mohanlal, who is one of the most loved matinee idols of Malayalam cinema.

In a way, the director fused the movie into a quasi-historical cine-fiction of the Dravidian movement – the matinee hero and villain of the ‘Dravidian’ landscape. Given the way movies spill from the silver screen into the main discourse in the Dravidian land of pseudo-rationalism, such a depiction was almost a surreal depiction of a sentimental social truth.

When one talks about Karunanidhi at ground zero, beyond the political pretensions and niceties, one finds only two emotions – the extreme love and loyalty he has commanded among his party cadre and the aversion that his enemies have for him. Despite consistent complaints that Karunanidhi had made the party his family property, the core Dravida Munnetra Kazhagam (DMK) cadre always stood by the leader. They never cared for party position or money. His Tamil proficiency, which was, however, more on rhetoric than on substance, had at least three generations of such storm troopers spell-bound. With this competence, Karunanidhi could build on political opportunism and, at times, even indulge in inappropriate comments. Yet, the DMK supremo could trust his Tamil mastery to mesmerise his core constituency.

The single greatest achievement of Karunanidhi was his ability to convince a substantial population of Tamil Nadu that he was synonymous with the welfare of Tamils as a society and as an ancient nation. This Tamil society was defined by the Aryan other which often included Tamil Brahmins. Any Tamil Brahmin who happened to criticise Karunanidhi would be labelled an Aryan. Any media criticism of Karunanidhi would be labelled a ‘Brahmin Aryan conspiracy’. But one should remember that though a substantial portion of Tamil Nadu was spellbound by his rehtoric, a majority of Tamils instinctively rejected his ideology and politics. They took the side of matinee-idol-turned-politician MGR.

A marked feature of Karunanidhi was that he harboured a vengeful hatred for Hinduism. Perhaps, some deep wounds from his past. which we don’t know, was responsible for this. Whenever he got a chance, he ridiculed Hindu puranas, epics, rituals and culture. When he saw a DMK party member wearing a vermilion mark on his forehead, he ridiculed him in public asking if he was bleeding from the forehead. Yet, his own family members have always sported vermilion marks on their foreheads. He also disapproved the Hindu ritual of firewalking as barbaric. With periodic regularity, he would hurt Hindus with statements like ‘Hindu means a thief’ or ‘Did Rama study in any engineering college to build a bridge?’ etc. But his success as a political leader was despite the fact that a substantial number of the DMK cadre who adored him were practising Hindus and followed all these rituals that Karunanidhi ridiculed openly.

Karunanidhi himself suddenly started wearing a yellow shawl, which became synonymous with him in the later part of his life. When asked about it, he gave various reasons as his imagination guided him - from medical reasons to ‘it was a colour loved by Buddha’ etc. But everyone seemed to know even within DMK circles that it was for astrological reasons. But again, no one saw in it any dichotomy.

He strongly supported the politics of religious minorities. One needs to think of it in two ways. One, it was for vote bank politics. Two, ideologically, he wanted Tamils to eschew Hinduism and become either Christians or Muslims - the monotheist religions. The Dravidian rationalism was only a stepping stone from superstitious Aryan conspiracy of polytheist Hinduism to monotheist ‘decent’ Christianity or Islam. So one cannot see his die-hard refusal to wish Hindus on their religious festivals and his enthusiastic participation in the religious functions of Christianity and Islam, as mere vote bank politics. It was definitely vote bank politics, but it also had an ideological intent.

For the expansionist minority religions operating in Tamil Nadu, both Christianity and Islam, Karunanidhi was a great hope. He showed what kind of political leadership the colonial Aryan-Dravidian prism could produce in the Hindu society. For them, Karunanidhi with his hatred for Hinduism and yet supported by Hindus, was the most crucial support for converting the people of the state to their own religions.

The flirting with political Islamism by Karunanidhi briefly shocked him, but only once. It was when the 1998 Coimbatore bomb blast happened. Karunanidhi seemed to have realised for a very brief moment of three years in his long political career that he had committed a blunder by nurturing Islamist forces in Tamil Nadu. So, when DMK entered into an alliance with the Bharatiya Janata Party (BJP) he pursued a proactive policy of containing Islamist terrorism. That was during the National Democratic Alliance -I rule. At that time, in Tamil Nadu, too, it looked like there has been political consolidation of Hindus. For a brief while, the DMK seemed to have taken a pro-Hindutva stand. In March 2001, Karunanidhi inaugurated the ‘Grama Kovil Pujarikal Peravai’ (GKPP) of the Vishwa Hindu Parishad.

However, DMK’s defeat in 2001 assembly elections despite the alliance with BJP, made Karunanidhi rework his strategies. In 2004, the BJP-Anna Dravida Munnetra Kazhagam alliance was a complete wash out. Karunanidhi had stitched a rainbow coalition of Islamist forces, Congress and communists which won in all the 40 constituencies, including the one in Puducherry. This clearly proved that despite their 1998 good performance, Hindu leaders , particularly Tamil Nadu BJP, had miserably failed to create a substantial Hindu vote bank for themselves. So Karunanidhi now reverted to an even more virulent anti-Hindu strategy. Soon, Tamil Nadu would become a haven for Islamist forces.

In 2009, not only the failure to save the Tamils of Sri Lanka from the immense human tragedy they suffered in the civil war but the antics indulged in by Karunanidhi - now called with caustic sarcasm as ‘breakfast to lunch’ fasting in Marina beach - is remembered as an all-time low moment in the life of a politician who made Tamil the heart of his political career. That was one moment that even shook the faith of even the most ardent common DMK cadre in their supreme leader.

Now, as one looks back at the whole political history of Tamil Nadu, there can be certainly one thing that one needs to say about this leader: He was a master Machiavellian politician in a democratic environment. With the kind of skills he possessed, he should have become a statesman, a universal leader and could have even led Tamil Nadu to a resurgence. But, somehow he allowed deep-seated vengeance and opportunism to dominate his extraordinary leadership skills.

Will DMK soften its anti-Hindu stance post-Karunanidhi? It is very doubtful. M K Stalin has given mixed signals but most probably he seems inclined to continue his father’s legacy. Another scion of the supremo, Kanimozhi, is vehemently anti-Hindu, perhaps even more so than her father. So, DMK will continue to be the political anchor point of anti-Hindus.