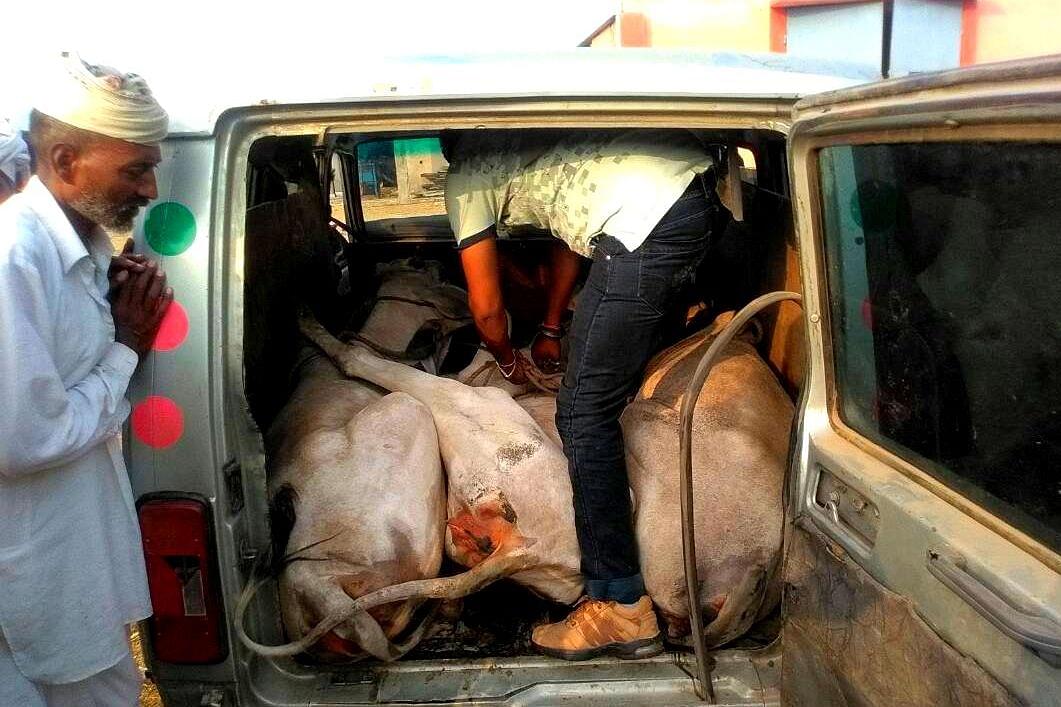 Dead cattle stuffed in a van.

With much fanfare and lofty claims, the Manohar Lal Khattar-led Haryana government released the notification of the Haryana Gauvansh Sanrakshan and Gausamvardhan (HGS and GS) Act in November 2015. It chose the occasion of Gopasthami to officially announce that the anti-cow slaughter act had come into force after president Pranab Mukherjee’s nod.

Under the act, cow trafficking, slaughtering and possessing or consuming beef were prohibited in Haryana. A ban was also imposed on the sale of canned beef (flesh of cow contained in sealed containers) that was legal during the previous state government.

Newspapers called the act “stringent”, “tough” and even “draconian”.

Four years later, the claims turn out to be farcical. It is revealed that of 800 cases filed under the act so far, no accused has been convicted.

The reason? The state government stopped at publicising the act but never cared to frame rules for its implementation. In absence of laid-out rules and training to the police, more than 2000 accused are either out on bail or have been acquitted.

It was only after the Punjab and Haryana High Court lambasted the government earlier this year that things have started moving. In the process, a disturbing picture of the menace of cattle-smuggling in Haryana’s Mewat district, and the police and administration’s helplessness in tackling it has emerged.

Here’s all that the various court hearings and government affidavits say:

On March 28, Justice Mahabir Singh Sindhu of the Punjab and Haryana High Court was hearing an anticipatory bail plea of an accused booked under the act. The accused, Israil, had a first information report (FIR) filed against him more than nine months ago at Nuh Police Station in Haryana’s Mewat district (FIR number 432 dated 13 June 2017), but till date, had not been arrested.

Justice Sindhu came down heavily on the police, observing that the court had come across a number of similar cases where accused booked under the HGS and GS Act managed to flee from the spot “despite a secret information to the police prior in time”.

“This shows that there is a complete inaction on the part of the police of District Mewat or deliberately the accused are let to go; or there is a question mark for registration of these cases,” the judge observed, and directed Haryana’s police chief to provide details of all cases registered under the act so far.

‘Zero Conviction Under The Act’

Haryana Director General of Police (DGP) Manoj Yadava submitted the report on 4 April. It said that the police personnel in Mewat are working in a quite hostile atmosphere, facing danger to their life as well as safety.

Close to 800 cases were filed under the act but not even a single person was convicted, it revealed.

The DGP’s report, that compiled data for nearly three years – between the enforcement of the act in November 2015 and 31 March 2019 – said,

The sorry figures prompted the court to pull up the police. In a 5 April hearing, the court observed,

…it is apparently clear that situation is quite alarming and mere registration of the FIRs for commission of the offences under the Act of 2015, resulting into 100% acquittal by the trial Court(s) can only be termed as a police paradise and by no stretch of imagination, it can be accepted that law enforcement agency is successful in any manner for implementation of the provisions of the Act of 2015 in District Nuh.

The judge also made some sharp observations on the nature of the crime,

…the offences are being committed by hardcore smugglers, fully trained and that too in a well planned manner on large scale in an organized way. The affidavit also reveals that whenever the police tried to apprehend the accused or make efforts for intercepting or stopping the vehicles carrying smuggled cows for slaughtering, then accused persons attacked them not only with stones, but there are instances of using illegal firearms/weapons and such incidents are frequent in District Nuh.

The police affidavit said there were 30 cases where accused were booked for using weapons.

Justice Sindhu now asked the DGP to give an affidavit on the reasons behind zero conviction “to find out the solution of the malaise before it is too late, resulting into total breakdown of law and order situation in District Nuh”.

DGP Yadava submitted the affidavit on 23 April, which has been accessed by this correspondent. It says that out of 13 cases, accused in 10 cases were acquitted and in three, were discharged.

The key reasons given in the affidavit are:

The affidavit says that action would be taken against the erring officers and that the cops would now take the following steps in order to make the prosecution’s case stronger:

Things Get Moving – Training For Cops, Amendment In Act

In an 8 May hearing, the court was informed that Israil was arrested by the police – nearly a year after being booked – and action was initiated against five cops for their failure to act against the accused. The court was also informed that the Haryana government was considering framing of rules under the 2015 Anti-Cow Slaughter Act to put in place effective mechanism for export or transportation of cows in and outside the state.

The court appointed advocate Deepak Balyan, who is also an additional Advocate General with the Haryana government, as an amicus curiae in the case for assistance.

The Times of India reported on 21 June that Haryana DGP ordered special training for cops in Mewat for dealing with such cases. In a letter to the director of Haryana Police Academy in Karnal, the DGP said,

Copy of all 13 judgements along with reasons of failure are being sent to you with the request to independently examine in these and find out deficiencies in the investigation. After study of judgement and the cow protection Act, a special training program should be launched for investigating officers of Nuh district.

The DGP also directed the Nuh police chief to send investigating offices (IOs) of all police stations to the academy for training.

The Indian Express reported that on 25 June, the Haryana Cabinet, chaired by Chief Minister Manohar Lal Khattar, amended the 2015 act to "make it more stringent” by empowering police officers to seize and inspect vehicles allegedly used for smuggling of cattle or beef.

…Any police officer not below the rank of sub-inspector or any person authorised in this behalf by the government…may enter, stop and search any vehicle used or intended to be used for the export of ‘cows or beef’. He may seize ‘cow or beef’ in respect of which he suspects that any provision of this Act has been, is being or is about to be contravened, along with the vehicle in which such cow or beef is found…

Amicus Curiae appointed by the court, Deepak Balyan, submitted his report on 31 August. At the onset, the report reveals that the government body did not bother to frame laws under the new act in four years of its enforcement.

In the State of Haryana, despite the fact that there was enactment of Haryana Gauvansh Sanrakshan and Gausamvardhan Act, 2015 (Haryana Act No. 20 of 2015) but the Administration of Justice or the officials at the higher level negates all the efforts to seek amendment in the State Laws/ framing of rules under the New Act from the last 4 years to make them more effective and stringent (sic).

The report makes scathing observations on the system failure against the “powerful meat lobby”, noting that “with connivance at local level, untold number of cattle are being transported in measureable conditions for slaughter outside the State. The high profitability has created very high stakes in the meat trade. It has increased the capacity of the meat lobby to spend lavishly in buying the cooperation of the authorities (sic).”

It gives several suggestions, the most important being that the government immediately frames rules under the act and restricts transportation of cows between 7 am and 5 pm on the lines of Gujarat, so that accused is unable to take the benefit of darkness for escaping.

Balyan’s report calls Mewat a “a paradise for beef traders”. It says,

The Mewat area in Haryana, which is inhabited by minority community Mews and the bordering areas of Rajasthan and Uttar Pradesh, such as Mathura, Alwar and Bharatpur, is a paradise for beef traders. Here mass killings of cows takes place illegally and openly in small villages, mostly in areas between 2 hills or sometimes even in the houses in the villages.

On 29 August, the court observed that the state counsel is “in agreeable” with the 7 am-5 pm suggestion but has asked for time.

Fresh data submitted to the court revealed that between 1 April and 25 August, a total of 99 FIRs were registered under the act out of which, 175 accused in 68 cases managed to escape and only 54 were arrested.

This, the court said, was “quite dismal and far from satisfactory” and directed the amicus curiae to visit all the police stations in Mewat and suggest measures for proper implementation of the act.

In September, the state counsel informed the court that the Haryana government was “in the process of finalization of some amendment” in the 2015 act. The next hearing in the case is scheduled on 28 November.

Why Was Nothing Done Before Court Rap?

With such poor handling of the cattle-theft, smuggling and illegal slaughter problem on part of the state, it is no wonder that those involved in the beef trade have resorted to killing cattle owners and firing at the police. Reports after reports tell us about the fear among farmers of the beef mafia and their growing anger against the government and the police. Reports of farmers staging agitations outside police stations are now a routine sight in regional newspapers.

The average cow-revering villager is left to silently bear the everyday horror of brutality inflicted on the cows.

One wonders why the government failed to see it all before the court rap? Above all, will things now become better?