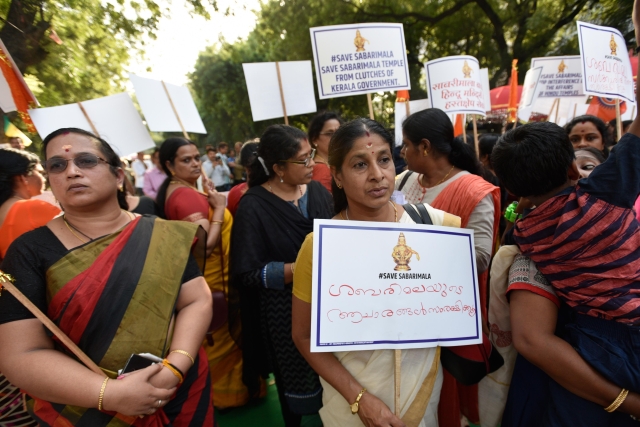 The issue of allowing women of reproductive age into Sabarimala Ayyappa Temple in Kerala will be back in focus this week with a private member’s bill likely to be tabled in Lok Sabha on Friday.

Malayala Manorama reported that N K Premachandran, who represents the Republic Socialist Party from Kollam, has been given the permission to table the bill.

Premachandran is part of the United Democratic Front (UDF) in Kerala that is headed by the Congress. The UDF swept the Lok Sabha polls in Kerala winning 19 of the 20 seats. Congress president Rahul Gandhi had, during the election campaign, said that the party believed in allowing people to express their faith as long as it is peaceful.

Prime Minister Narendra Modi, addressing an election rally in Kozhikode in April, said Bharatiya Janata Party (BJP) stood for upholding the “faith and tradition” that have been prevalent for centuries. Indirectly hitting out at the Kerala government, he said a few people in the name of implementing the Supreme Court order were harming the faith of the land.

In September last year, the Supreme Court ruled that the ban on women of reproductive age entering the Ayyappa shrine was against the law. This led to widespread protests across Kerala with the state government, headed by Pinarayi Vijayan of Communist Party of India-Marxist (CPI-M), trying to implement the ruling using force.

In a way, the outcome of Lok Sabha elections in Kerala is seen as a reflection of the people’s anger against the Vijayan government. Even though the BJP was the party which raised the issue, it failed to open its account in the state.

The reason for the Congress gaining, rather than the BJP, was that the people thought the UDF was better placed to win than the BJP. The voters believed that if they supported BJP, it could result in the CPI-M-led Left Democratic Front (LDF) gaining, and thus their anger and frustration with the Vijayan government would not be reflected properly.

The introduction of the private member’s bill comes at a time when the Supreme Court has completed hearing a slew of petitions against the ruling allowing women of all ages to enter the Ayyappa temple. The apex court has reserved its judgement after hearing all the concerned parties.

Even though the Premachandran bill has been cleared by the Law Ministry, it is unlikely to be taken up for discussion immediately. While the bill will be introduced, any discussion on it will be based on a draw of lots that decides which private bill should be discussed first. The draw will likely take place on 25 June and the discussion on 12 July.

Members of Parliament are allowed to move proposals for a new regulation or amendment to law through private member’s bills that are taken up on Friday afternoons, when the house is in session. However, in most cases, members usually withdraw the bill after brief discussions as the ruling dispensation persuades them to take it back.

Be that as it may, Premachandran’s private bill seeks to protect the traditions and customs of the temple. It also seeks to invalidate the Supreme Court ruling, and wants any change to be made only on religious practice.

The private member’s bill by the UDF member of Parliament has been moved with an eye on the 2021 assembly elections. With the LDF failing to live up to the expectations after its 2016 victory, the UDF fancies its chances and doesn’t want to let go of any opportunity to ram home the advantage it enjoys now.

This private member’s bill is to send a message to Ayyappa devotees and the dominant Nair community that the UDF has their interests foremost in its priorities. The introduction of the bill is to show how the UDF has accorded top priority to the Sabarimala issue.

Premachandran is actually doing Congress’ bidding, lest the Gandhi-led party be seen in poor light by the minorities who make up 45 per cent of Kerala’s population. While Muslims make up 25 per cent of the state’s population, Christians comprise 19 per cent. It is likely that if any Congress member from Kerala moves such a bill, the LDF could try to showcase it as an anti-minority move. Also, the Congress wouldn’t want to antognise the Indian Union Muslim League, a dominant partner in the UDF.

Premachandran’s move is also seen as a strategy to put the BJP on the back foot. By this initiative, the UDF is trying to take the credit for any ordinance or law that the Narendra Modi government could pass in its second term. In a way, it is a move to pre-empt any claim that the BJP could make on the Sabarimala issue.

However, it is likely that the Kerala Member of Parliament will be given an assurance by the government that it would come out with a law to protect the sanctity of the Sabarimala Ayyappa temple and ask him to withdraw the bill. Even if the Modi government has prepared its plan for tackling the Sabarimala issue, it would only seem like a reaction to the private member’s bill being introduced now.

One way the BJP can counter the introduction of the private member’s bill is to introduce an official bill that would nullify the Supreme Court’s ruling in September last year and revive the age-old practice. The Modi government has time until 12 July and it can certainly come up with the bill, if it has the will. And it has to get it done much before 12 July, lest it hand over the bragging rights to the UDF.