A Few Months Before Assembly Polls, What Is Happening in Tamil Nadu? 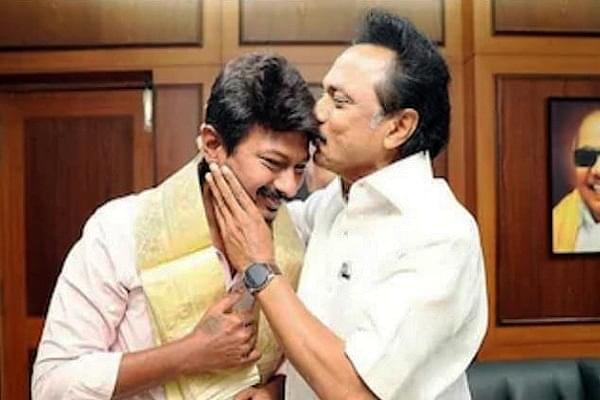 Some very curious developments have been taking place in Tamil Nadu.

After an anti-Hindu propagandist went obscenely berserk against Hindu Puranas and devotional hymns on his Youtube channel, there came a surge of Hindu anger which forced the government to shut the Youtube channel and initiate legal action against the activist group.

Another Youtube activist, Maridhas, has been relentlessly campaigning against the Dravida Munnetra Kazhagam (DMK) and exposing its anti-Hindu agenda. He has also brought out the ideological connections between the core-Dravidianism of DMK and the above-said pseudo-rational propagandist.

The DMK, which was initially confident of winning next year’s State assembly election because of some crucial blunders the All India Anna Dravida Munnetra Kazhagam (AIADMK) government did during the lock-down, is no more that certain. The anti-Hindu label might hurt the DMK in the coming elections.

Udayanidhi Stalin, who being the son of present party chief M. K. Stalin, is seen as the future supremo of the DMK. Though the DMK was started by C.N. Annadurai, a leader who respected democracy, after its capture by M. Karunanidhi, it fast devolved into what looks like more a family corporation than a democratic political party.

It is a paradox of perversion that the Dravidian movement, which criticises the birth-based systems of Hindu society, which have been reformed and reformulated in inclusive ways through millennia, should succumb to birth-based dynasty control within a few decades of its existence.

So, what Udayanidhi Stalin tweets shows not only the compulsions of politics but also the dynamics inside the family. And for the DMK, the line demarcating family dynamics and party politics is often blurred, if not non-existent.

It should be noted that the rationalism of the Dravidian movement is actually nothing but colonial hatred for Hindu Dharma.

The Protestant mindset of colonial rulers could never comprehend the spiritual symbolism and the Hindu aesthetics of Ganesha. Naturally, they hated this deity and singled him out for humiliation.

The Dravidian movement, being its colonial masters’ voice, followed suit. So one of the great ‘rationalist’ deeds of EVR was breaking in public an idol of Ganesha.

Subsequently, in the Dravidian orthodoxy, Ganesha Chaturthi is a festival for which no Dravidianist leader of the DMK vintage would extend his wishes. The same goes for Deepavali and Vijaya Dasami.

The popular joke in Tamil Nadu is that generally Tamil Hindus are happy that the DMK leaders do not extend their greetings for Hindu festivals for the festivals are too good for corrupt politicians to extend their wishes on.

Now comes a tweet by Udhayanidhi Stalin showing a photo of a Ganesha idol made from clay and even adorned with the sacred thread .

Once the photo was published it generated quite a heart-burn among the hard-core Dravidian fundamentalists. Caught between a rock and a hard place, Stalin Junior stated that the idol was kept in ‘puja’ by his mother and his daughter wanted a photo with 'it’ and he also shared the photo in the social media. No one is buying this explanation.

The DMK attempt to reflect a pro-Hindu image is not new. Even when Karunanidhi was alive, Stalin had once tweeted out a greeting for Ganesh Chaturthi and then retracted it, blaming it on the admin of his Twitter handle. Now, this tweet by Stalin junior seems to be more like a cautious testing of the waters for a pro-Hindu image make-over.

It is well known that Durga Stalin, the wife of current the DMK supremo, is a devout, ritualistic Hindu who goes around temples, allegedly praying for her husband to get the chief minister's post, which still remains elusive for him.

Usually, the DMK is extra-cautious in hiding the devotion of its first family members. But now such photos and videos are said to be deliberately leaked into social media, as an attempt to woo the angry Hindu voters.

Even more amusing are the photos Thol. Thriumavalavan uploaded on his social media profile.

It is well known that his sister was a convert to the Christian faith.Yet, for her shraaddha ceremony, Thirumavalavan conducted all the rituals in a Hindu manner. Having experienced very recently the power of rituals in alleviating the pain of personal loss, the writer is in full sympathy with the sentiments of Thol. Thirumavalavan and shares his pain.

Nevertheless, this was the person who had conducted an anti-Sanatana conference and had declared that he would destroy Sanatana Dharma while sharing a platform with anti-Hindu forces, including the SDPI. Yet, it is to the same Sanatana Dharma and its rituals that he and his family have to come to drink the waters of solace and life.

Now Thirumavalavan is no fool nor a political novice to upload these photos on his social media page. There are two possibilities.

He can give a convoluted interpretation telling that these rituals were originally Dravidian or even Buddhist. But the homa fire lit by a purohit (of Valluvar jati most probably) is not Buddhist or Dravidian but Vedic.

Secondly, he had to show that despite his sister’s conversion in terms of culture and spirituality he and his family are anchored to Dharma - a social phenomenon that Hindutvaites have always have insisted as is a ubiquitous phenomenon in India.

It also points out to the pressure that Thirumavalavan faces within his own communal vote-bank where suspicion on his Hindu identity would cost him support for his leadership.

This is a persistent problem for anti-Hindu forces in Tamil Nadu, the Churches and the Islamists since they have invested much in the DMK and VCK in terms of ideology and vote-bank support to further their proselytising agenda.

If the DMK turns pro-Hindu at some point of time, now or in the next generation, then much may be lost for them.

If the cultural and social reality of the Hindu Scheduled Community forces Thirumavallavan to jettison his anti-Hindu rhetoric or if the SC community clearly declares that an anti-Hindu leader like Thirumaa is unacceptable to them, then again it will be a hard blow.

Meanwhile not all is well in the Hindutva camp either. Tamil Nadu BJP still seems to be in lacklustre mode. While there are lone voices and innovative as well as brilliant efforts from individuals like Maridhas and S.G.Surya, the party still seems to lack the lion-instinct that is needed to arouse the Tamil Hindus to oust once and for all the Dravidianist pseudo-rationalist policy.

The paradox of Tamil Nadu BJP is that the cadre are energetic and eager while the leadership seems to lack enthusiasm. One wishes under the new leader, Dr. Murugan, the BJP will at last accept its own importance in Tamil Nadu and work to fulfil its destiny of becoming the first non-Dravidian national party to liberate Tamil Nadu from the darkness of Dravidian delusion.