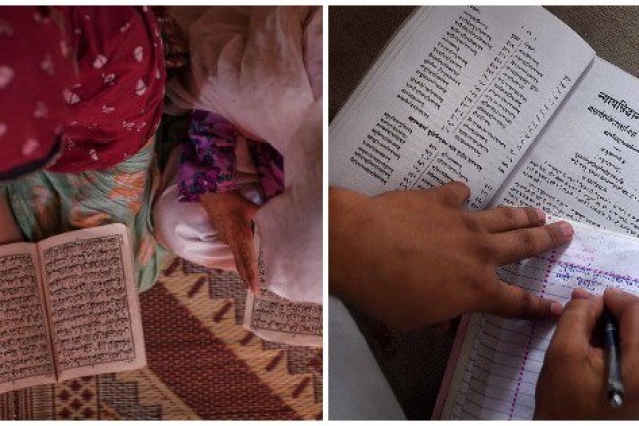 Early in the meeting, Monika Garg, principal secretary of Uttar Pradesh Board Of Madrassa Education, says, "The portal is entirely the department's baby. There were no such instructions from the state government."

Garg is talking about the madrassa board website launched last year for the first time in its 14-year-old history.

Invariably reported in the media as a move to "check irregularities in madrassas", the website has been viewed with much suspicion. Given that it's done under a state government perceived as Muslim-unfriendly, it's been interpreted as a "crackdown" on madrassas. Some clerics have openly termed this reform as a "conspiracy to target a particular community".

But Garg, who took up the post in March 2017, has a different explanation.

It was an incident she personally encountered at an airport that prompted her to introduce "transparency" in the madrassa education system.

"I saw a group of Muslim boys (going by their appearance) who were trying to find their way around the airport. They could hardly read the signs or pick up instructions. I learnt they were educated at madrassas and had valid degrees. But I wondered what good were those degrees."

Another senior official, who did not wish to be named, said that many students use the certificates earned from the madrassa board to go to Gulf countries. "They serve as age proof," he informed.

Garg was now determined to hold the next madrassa exams in the most cheating-free and transparent manner as possible. The first step was to access full student details.

The other official informed that the madrassas were wary of making their details public, so a unique user identity was created for each of them. The madrassas were asked to provide information like the number of students and teachers, facilities and subjects they taught.

The result of the whole exercise was that the system succeeded in weeding out at least a lakh students who were probably associated with the madrassas only for scholarships and government aid, or for easy degrees.

"The primary job of the board is to conduct fair exams. We single-mindedly focussed on this," said Garg.

"We also cracked down on cheating. We want the students to compulsorily study to earn their degrees," she said.

A side-effect of the exercise was that the board, that operates under the Department of Minorities Welfare & Waqf of the state government, ended up saving a hundred crore rupees.

Here's how: there were 19,123 madrassas officially affiliated to the madrassa board, but only 18,225 registered through the website. The rest (introduced by the media as "fake") could be non-existent and did not share the details. Of the total 18,225 madrassas, 560 are grant-in-aid, in which the entire expenditure is borne by the government; some 8,534 are attached to the madrassa modernisation scheme, where they get financial assistance from the government; and 140 of them have industrial training units running in them.

While the officials were unable to provide an estimation of the annual state expenditure on the madrassas, the figure is at least 560 crores, as each grant-in-aid madrassa gets an estimated Rs 1 crore from the government. Another Rs 400 crore is set aside for modernisation of the madrassas that is used from the minorities’ development fund.

The transparency has also benefited the estimated 33,000 teachers who had no job security. Now, their details are recorded with the department so the madrassa committees can't fire them on their whims.

"There were cases where a madrassa manager would replace the entire team of teachers with his new relatives after getting his son or daughter married. Every other day, the teachers would hold protests outside our office," the official said.

The officials said that even if a section of the Muslim community continues to be skeptic, most madrassas have embraced the change. "It has had a positive social impact. The madrassas feel the government is doing something for them," Rahul Gupta, registrar of the board, said.

These are some important reforms and the media coverage has been wide. However, the coverage has been limited to the madrassa board. The corresponding efforts in the Uttar Pradesh Board of Secondary Sanskrit Education Council have gone nearly unnoticed.

In fact, in a January meeting of minority welfare ministers of nine states with Union Minister Mukhtar Abbas Naqvi, UP Chief Minister Yogi Adityanath had turned down the suggestion by UP Shia Waqf Board chief Wasim Rizvi to “shut down all madrassas”, and instead, suggested modernisation as the solution for both madrassas and Sanskrit vidyalayas.

The madrassa and the Sanskrit boards are comparable as both primarily impart language and religious studies, Arabic and Persian being the language of the former while Sanskrit of the latter. The Sanskrit board's Poorva Madhyama and Uttar Madhyama certificates are equivalent to Class X and Class XII of the CBSE.

At the time when the government is trying to convince madrassas to use NCERT (National Council of Educational Research and Training) books, similar attempts are being made in the Sanskrit vidyalayas too.

Notably, madrassas under the modernisation scheme provide their students modern education besides religious studies, like science, maths and Hindi and English languages. They use books from private publications, but the government is encouraging them to go for NCERT books. Similarly, many Sanskrit vidyalayas also provide this facility to their students who primarily read Sanskrit language, shastras and puranas. Their religious syllabus is similar to that of Varanasi's Sampoornanad Sanskrit University (SSU).

"The proposal (of NCERT books) is under consideration," said Deep Chand, secretary of the Sanskrit board.

For the first time since the Sanskrit board was set up in 2001, the Yogi Adityanath government nominated all its 28 members in December. It had been facing such a neglect that it was functioning only with six to seven members. It is for the first time in 16 years that the board has got a full team.

Currently, there are 1,151 vidyalayas affiliated to the board including 973 grant-in-aid ones. A total of 89,000 students passed out last year. Compared to the madrassa board, annual government spending on it is nearly half at Rs 230 crore. "This includes salaries for about 2,000 teachers and 600 principals," said deputy director Kamlesh Kumar.

The board also got its own website for the first time last week.

"The Sanskrit board has faced years of neglect. Sanskrit itself has become a thing for conservation. But hopefully, we can get more independently running Sanskrit vidyalayas to affiliate themselves with the board," said Kumar.