‘A Mob Dragged Us Into Their Lane And Beat Us To Pulp’: Two Dalit Men Near IB Staffer Ankit Sharma’s House Recount The Horror 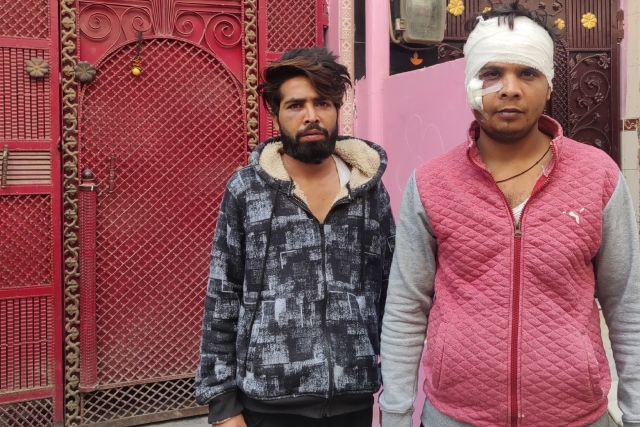 New Delhi: Bhaisaab alias Lala lives in Moonga Nagar, a Hindu-populated locality along Karawal Road, that is located right opposite to a building where Aam Aadmi Party’s controversial municipal councillor Tahir Hussain has his office.

The three-storey building is the tallest in the area. Video have emerged of hundreds of men standing atop Hussain’s building throwing a volley of stones and petrol bombs on other buildings and on the road.

Hindu residents say it was a Muslim mob that targeted their residents and their businesses and temples. They say the videos were shot on Tuesday (25 February).

It was on the same day that Intelligence Bureau staffer Ankit Sharma is believed to have been dragged by a communal mob inside Hussain’s building and killed.

Bhaisaab says he was similarly attacked a day earlier – on 24 February.

The 25-year-old cab driver, who belongs to a Scheduled Caste, has sustained major wounds on his head and around his eyes. Even after a week, his face is swollen.

Bhaisaab says he was returning home around 7:30 pm after buying milk when a mob outside Hussain’s building pounced on him. “They were shouting ‘pakdo pakdo’, and dragged me off the road into Nehru Vihar. There, they threw me on the ground and beat me mercilessly for about fifteen minutes,” he says.

Nehru Vihar is a mixed-population locality sandwiched between the ‘Hindu’ Moonga Nagar and ‘Muslim’ Mustafabad.

“At one point, I pretended to be dead. I stopped breathing. Then they left me,” he says.

“I got up immediately and ran away without looking back. That’s how I saved my life.”

Bhaisaab says the attackers were from ‘Katran market’ that he describes as an almost all-Muslim market that deals in old clothes and rags. “I know all of them by face. They know me by face as well. I pass through their market all the time. I can’t believe they attempted to kill me,” he says.

Shakuntala, mother of Bhaisaab, shows us his blood-soaked sweat shirt. She hasn’t washed it as hospital officials told her not to, explaining to her that the clothes might be useful as a piece of evidence later.

Bhaisaab was taken to state-run Lok Nayak hospital where a medicolegal case (MLC) was registered.

Deepak Khatik, an auto driver belonging to a Scheduled Caste, says he was walking along with Bhaisaab when he too was “picked up” by a mob outside Hussain’s building. He says he was taken to Katran market and beaten up, and left when the mob thought he was dead.

Residents of Moonga Nagar say that from Monday evening itself, the”other side” had begun picking up men from “their side” and dragging them into “their” lanes.

Outside Bhaisaab’s house, the residents huddle around us and speak to us as a group.

“The men who were picking up our men were either in skull caps or beards so we believe they are all Muslims. They were walking around in groups of about 200 and carrying weapons. They were in full mood to attack,” a resident says.

“They are all Tahir Hussain’s men. He had planned this well in advance and brought a lot of outsiders in the area. The attacks were happening right below his building,” says another.

“Hundreds of men from Sambhal [in Uttar Pradesh] were brought here in trucks. The vehicles enter straightaway into Hussain’s building,” another says.

“Madam, what has unfolded here isn’t anything unexpected. It was waiting to happen. Muslim men routinely ride their bikes through our streets in full speed. They scare our children playing in the streets. They literally terrorise us. If one of us as much as objects, they return with a mob,” a man says.

Right at the spot where Bhaisaab claims he was brought and thrashed, the Muslim residents deny seeing or knowing about any such attack. They say that most of them work in Katran market and none of them saw or heard about any attack in the market either.

“Whatever is happening, is happening outside on the road. Our Nehru Vihar is completely safe and has seen no violence,” says Abdul Gaffar, a resident.

“Here, we did not let anyone touch any of our Hindu brother,” he says.

Gaffar says that the Muslims of the colony are doing what “our Haji Saab” is telling them to. “Haji Saab says we are Muslims and Muslims are all merciful. We have told everyone that whatever they have to do, they should do on the road. Here, nobody is allowed to raise chants of either Jai Shri Ram or Allahu Akbar,” he says.

Gul Mohammad, who runs a shop in Katran market, says the violence has been perpetrated by “outsiders in masks”.

The residents of Moonga Nagar and Nehru Vihar are sharply divided not only in their version of what unfolded on Monday and Tuesday evening, but also in their politics.

When asked if Kapil Mishra, the Bharatiya Janata Party (BJP) member accused of inciting violence through his speech where he gave an ultimatum to the police to clear Jafrabad of anti-CAA protesters, is to be blamed, residents of Moonga Nagar denied it collectively.

“Mishra said nothing wrong. Show us his speech where he said anything objectionable. Where did he talk of violence? You think the violence happened after his speech? They were all prepared well in advance. They were preparing for it from December itself,” a resident says While others nod.

On the other hand, residents of Nehru Vihar give a clean chit to Hussain.

“Hussain is not and cannot be involved in such violence. He himself had to run for his life from the rioters. The rioters used his building,” a man says while others nod.