Abdul Kalam - A Patriot Above All Else 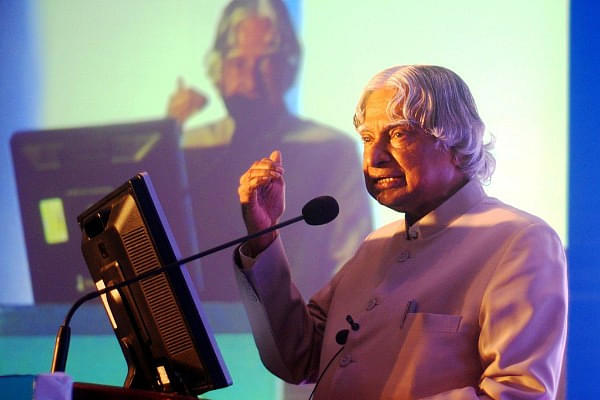 When his term as President of India ended in July 2007, Avul Pakir Jainulabdeen Abdul Kalam left the palatial Rashtrapati Bhavan, his home for five years, with just two small suitcases. And a lot of books, all his own.

I met him very briefly on three or four occasions, twice in Delhi and once in Chennai.

After each meeting, I recall being somewhat puzzled by the huge gap between the perception about him and the soft-spoken man I actually met.

After all he was India’s Missile Man, and someone who was nominated for MTV’s Youth Icon of the year not once but twice, in 2003 (industrialist Anil Ambani won) and in 2006 (cricketer Mahendra Singh Dhoni won). A youth icon at 70.

What was I missing?

Mumbai, January 2005. President Abdul Kalam, was to give away the Pravasi Sammans at the end of the third Pravasi Bharatiya Divas, an annual three-day event aimed at celebrating the great Indian Diaspora.

In his power point address, Dr Kalam addressed a key perception issue troubling the organisers. While the richer Indians abroad either resented or boasted about being wooed for their money, the poor and oppressed in regions ranging from Fiji, Mauritius, the Caribbean and the Gulf believed they were being ignored.

Titled ‘your prosperity is our happiness’, Dr Kalam’s slideshow made it amply clear that India was not looking for handouts, but keen to share the wealth of knowledge accumulated by the thousands of people who had left its shores, recently or many generations ago.

But while the presentation was so-so, the ovation he received from the Diaspora literally shook the rafters of the venerable National Centre for Performing Arts.

Handouts, or gifts, seem to have been a bug-bear with the man.

After briefly recalling his five ‘glorious years’ at Rashtrapati Bhavan, he said would leave behind all the gifts he had received (including personal ones) as part of an art gallery. He then went on to urge the audience to shun gifts, because they were ‘dangerous things.’ He recalled how his father, Janab Avul Pakir Jainulabdeen, who had been elected president of the Rameswaram Panchayat Board soon after independence, had thrashed him for letting some people leave a gift at their home to celebrate the win.’ A gift is a dangerous thing as it is always accompanied by some purpose,’ warned the elder Kalam.

”Yesterday, a well-known person gave me a gift of two pens. I had to return them with unhappiness,” rued the good President, who then went on quote from the Manusmriti, the ancient Hindu book of law, which apparently says that accepting gifts ‘extinguishes the divine light in a human’

”I am sharing this thought with all of you since no one should get carried away by any gift which comes with a purpose and through which one loses his personality greatly,” asserted Dr Kalam.

Thus spoke a man who sold newspapers to fund his education, who received honorary doctorates from 40 universities, and India’s highest civilian honour, the Bharat Ratna, in 1997. Thus spoke a man who during his tenure as President met and addressed over 100,000 students across the country, urging them to transform India. And to dream: “You have to dream before your dreams can come true.”

His dream was to see a developed India, a powerful India. And he was unabashedly unapologetic about India’s nuclear weapons program, which he felt would help India get its place at the world’s top table.

Thus spoke a man with whom I share a birthday.

So how does one reconcile the mild-mannered scientist with his trademark salt and pepper curls, with an Alpha nationalist attitude?

I realised what I was missing only when I read ‘Wings of Fire,’ where he spelt out not one, but three clear visions for India.

One, Freedom. ‘if we are not free, no one will respect us.’

Two, Development: ‘We are among the top five nations of the world in terms of GDP. We have 10 percent growth rate in most areas. Our poverty levels are falling, our achievements are being globally recognized today. Yet we lack the self-confidence to see ourselves as a developed nation, self reliant and self assured’

And three: India must stand up to the world. ‘Only strength respects strength. We must be strong not only as a military power but also as an economic power. Both must go hand-in-hand.’

That is when the penny dropped.

Because Dr Kalam may have been many things to many people. a newspaper delivery boy, a scientist, an engineer, a poet, an author, an inspiration, a mentor, an academic, a visionary. A man who could recite from the Koran as well as the Bhagvat Gita with ease, a ‘Maha-bore’ on socialite Shobha De’s list of bores. But above all, he was a patriot.

A soft-spoken one, no doubt.

But let there be no doubt, anyone who could leave a presidential palace which he called home with just two suitcases was anything but soft.