Akhilesh Yadav Tweets Out Number Of BJP Supporter Who Called Him ‘Tonti Chor’. The Man Is Getting Death Threats Now 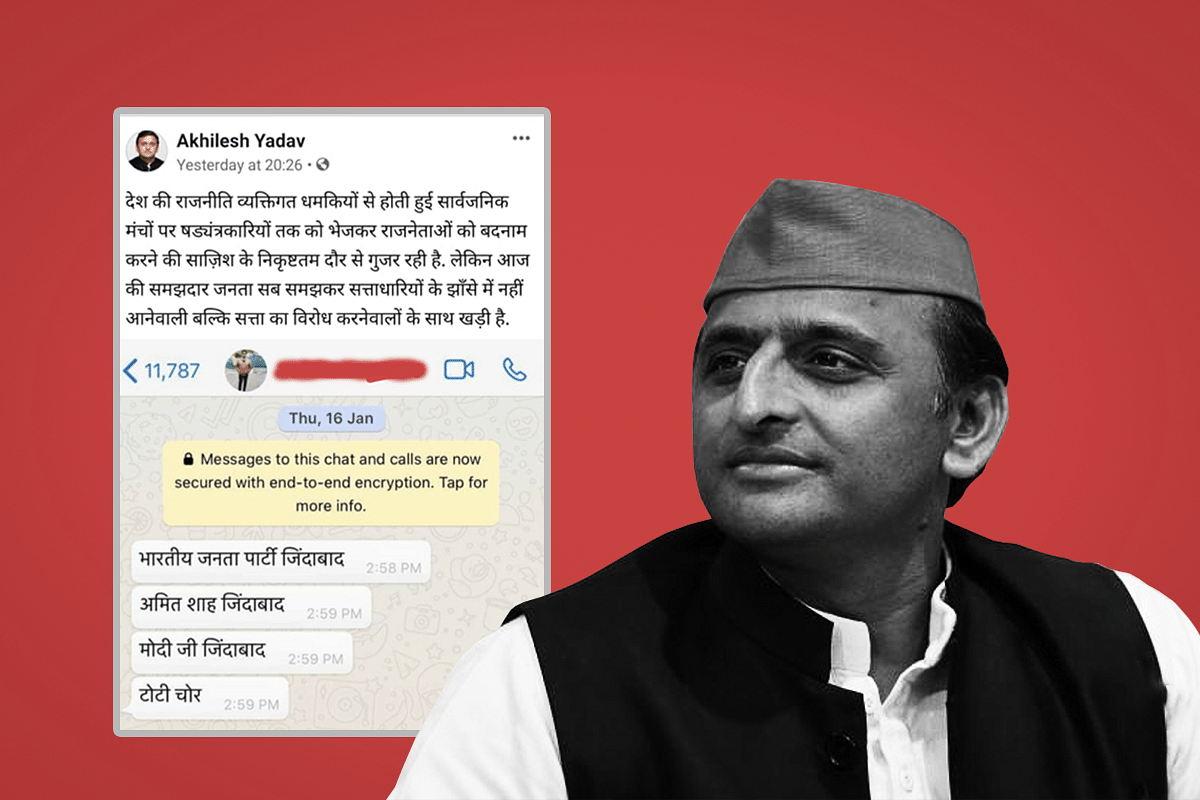 On 15 February (Saturday), Samajwadi Party president and former chief minister of Uttar Pradesh Akhilesh Yadav tweeted out the screenshot of some messages sent to him on WhatsApp.

The screenshot displayed the sender’s phone number as well.

Yadav called the messages as “personal threats” (translated from Hindi) to him.

Yadav’s post was mass-reported for this violation and was later found deleted, but not before it reached his one crore followers. The person whose number was made public, Prashant Singh, says he is now getting death threats from Yadav’s cadre and supporters.

Singh, 30, is a businessman and resident of UP’s Bahraich city, which is about 100 kilometres from state capital Lucknow. Singh told this correspondent that he is not affiliated to any political party.

He has kept the said phone number switched off since Saturday night.

Singh says that on Saturday evening, he began getting death threats on WhatsApp from unknown numbers. Some of them mentioned their names and affiliation to Samajwadi Party.

Soon, Singh learnt what had happened.

He was shocked. As the screenshot shows, he had sent those messages on 16 January — a month before Yadav tweeted them with the claim that they were “personal threats” given to him.

“I sent the messages to him [Yadav] when I was very disturbed with the violence unleashed by anti-CAA protesters across UP. I saw that SP was supporting the protesters and couldn’t stop myself from writing something to Yadav,” says Singh.

Singh refused to share with this correspondent how he managed to know Yadav’s personal phone number.

He says Yadav has “lied” on Twitter that the messages carried any kind of “personal threats”.

“Tell me, is calling someone tonti chor a threat? Is saying Modi zindabad a threat? He [Yadav] has made false claims to his followers,” he says.

Readers may remember that when Yadav vacated his CM bungalow in June 2018 after being replaced by Yogi Adityanath, government officials alleged that, among many other things, the water taps were found missing. Yadav allegedly left the bungalow in a poor state with broken tiles, missing water taps, decorative plants, lights, bathroom fittings and electrical fittings, and damaged swimming pool and kitchen.

Since then, Yadav’s critics have been teasing him as ‘tonti chor’. The jibe, it seems, hurts Yadav.

He mentioned it in a May 2019 election rally.

Singh says that Yadav’s cadre “has gone a step further in lying” and is spreading misinformation on social media that Singh gave “death threats” to the former CM.

Singh showed several WhatsApp messages sent to him as well as posts on social media.

Look at the kind of messages that your party members and cadre are sending him, @yadavakhilesh

At least put out a tweet saying Prashant never gave you a death threat and only called you tonti chor! pic.twitter.com/tV5sHwdExF

One of the posts on Facebook, by one Thakur Harsh Solanki, says Yadav’s followers will beat Singh to pulp and stuff straw into his body.

Another Facebook post, by one Bilal Khan, says he will make so many holes in Singh’s body that he will get confused where to breathe from and where to fart from. The post calls Singh as Narendra Modi’s dog, Amit Shah’s paramour and Yogi Adityanath’s illegitimate child.

Singh says the messages have left him disturbed and petrified. He says he fears for his and his family’s safety.

I will share the screenshots of the threats that Prashant Singh is getting. Scary ones. He has sent me a video of his appeal to @yadavakhilesh to tell his men to stop hounding him and his family.
Also @CMOfficeUP, pls see that Prashant is safe pic.twitter.com/MHwWUrshen

On Sunday, Singh recorded a video of himself and sent it to this correspondent, with a request to post it on social media. In the video, Singh has asked Yadav why he misrepresented his messages as some kind of threats, thus marking a target on his back.

Yadav has not responded on the matter so far.