Armyman Says Crowd Beat Him Up For Saving Cows, With Slurs Of ‘Bhakt Of Modi And Yogi’; Video Of Attack Viral 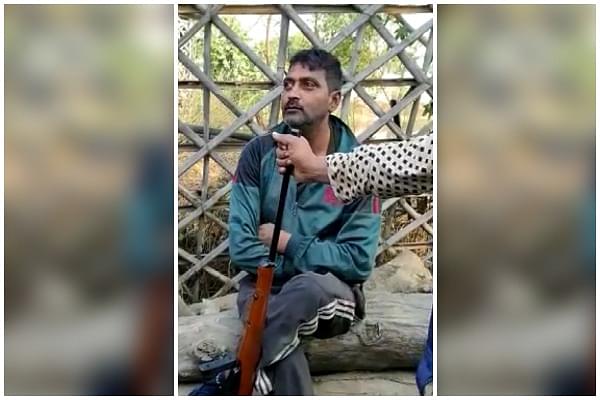 A still from the video that went viral. Sitting (in green) is Ramnaresh

An Armyman at home on a vacation has filed a police case against a group of men alleging that they thrashed him for objecting to cruelty on cows with slurs of being a “bhakt of Modi and Yogi”.

A video of the alleged attack on him has gone viral on social media where a crowd is seen attacking the complainant for his willingness to say ‘Jai Shri Ram’ and for being armed with a rifle (the video is embedded later in the report).

Ramnaresh is a resident of Uttar Pradesh’s Auraiya district and a serving soldier in the Indian Army. The First Information Report (FIR) lodged by him at Sadar Kotwali in Auraiya says that on 6 January, he was going to the site of his new house that is under construction in Khanpur area when he saw some butchers from ‘Katra mohalla’ thrashing two cows and taking the animals for slaughter.

When Ramnaresh tried to stop them, the men abused him saying he shouldn’t try to be a big “bhakt” of Modi and Yogi and he would be taught a lesson. More men joined in and thrashed Ramnaresh. They also snatched his licensed rifle, his gold chain and Rs 3,000 in cash that he had on him.

Hearing Ramnaresh’s screams, some men rescued him from the attackers, but the crowd swelled and began to raise slogans threatening him with death. When the police arrived, the crowd pressured the cops and framed Ramnaresh in a false case.

The crowd also threatened to butcher him in a slaughterhouse, says his statement in the FIR (number 24/2020, a copy of which is with Swarajya).

Some unidentified men have also been made accused in the case.

After some videos of the attack went viral, the Auraiya police informed on Twitter that two men – Rahat Ali and Sohrab – had been arrested. On 11 January, the Auraiya police posted another update that the main accused, Sankara alias Nafees, who also has past cases of cow slaughter registered against him, has been caught.

The “false case” referred to in Ramnaresh’s complaint was filed against him based on the statement of residents of Khanpur under IPC sections 504 (intentional insult with intent to provoke breach of the peace) and 506 (punishment for criminal intimidation).

When asked by this correspondent on 11 January, an officer at the police station declined to comment on the kind of religious slogan raised. He said that the objection was not to any religious slogan but “gaali-galauch” (abuses).

“The [first] complaint mentions no religious slogan. It just says that Ramnaresh was drunk and used expletives,” he said.

The officer further said that investigation is underway and the arrests so far have been made on the basis of videos that have emerged of the incident.

Several regional newspapers have reported that the crowd in Khanpur objected to the Armyman saying ‘Jai Shri Ram’.

Ramnaresh supports this statement, and videos suggest the same.

He told this correspondent, “I have a licensed rifle which I keep with myself all the time. The area where my plot is located is Muslim-dominated. I had merely objected to some butchers thrashing cows and taking them for slaughter. For this, they ganged up against me and began to abuse me. They asked me if I would say Jai Shri Ram. I replied yes I will. They thrashed me.”

A 41-second video that went viral shows Ramnaresh sitting on wooden logs while some men have taken his rifle.

One of the men says, “Matlab Jai Shri Ram ke naare lagaoge, lagwaoge? [So you will chant Jai Shri Ram and make others do it too?”

The men then begin to beat him with sticks.

An Armyman (the one sitting) was recently beaten up in UP's Auraiya by a crowd. This video went viral. 11 booked. Police made third arrest today. Report soon. pic.twitter.com/fYyAI3RxKG

There is another video of the incident where Ramnaresh can be seen cornered by a crowd that is threatening to beat him.

Another voice says that Ramnaresh came with a rifle and asked residents to say Jai Shri Ram.

BJP ka hai ye lagra hai [it seems he is from the BJP],” another voice says.

The crowd is also heard asking Ramnaresh what he was doing at the spot with a rifle and if he came to kill them, to which Ramnaresh says he had some work at his plot. The crowd is seen taking away the rifle and cartridges from him and asking others to get a rope to tie Ramnaresh.

When asked if he was the one who asked others to raise this slogan, Ramnaresh told this correspondent, “No I did not. It was a ploy to attack me. I happened to meet some Hindu men there and greeted them with the customary Jai Shri Ram. The Muslim men didn’t like it and attacked me. That, together with my objection to cruelty on cows, was the provocation.”

The Armyman shared this video with me, saying that after news spread that 'a jawan has been beaten up for saying Jai Shri Ram' (as reported by local media), crowd protested outside police station with loud chants of Jai Shri Ram pic.twitter.com/gaFxSDnQWQ

Ramnaresh said that it was a protest staged by his fellow villagers after news spread that a jawan had been beaten up for saying Jai Shri Ram.

In August 2018, three temple sadhus were killed in sleep by butchers in Auraiya’s Bidhuna village — some 40 kilometres from the site of the alleged attack on Ramnaresh after the sadhus tipped off police about illegal cow slaughter in the area. The sadhus were found in a pool of blood, their hands and legs tied to their cots and multiple stab wounds on their necks and other body parts.