As Kumaraswamy Waits For Rahul Gandhi’s Permission To Choose His Cabinet, Gandhi Flies Off Abroad 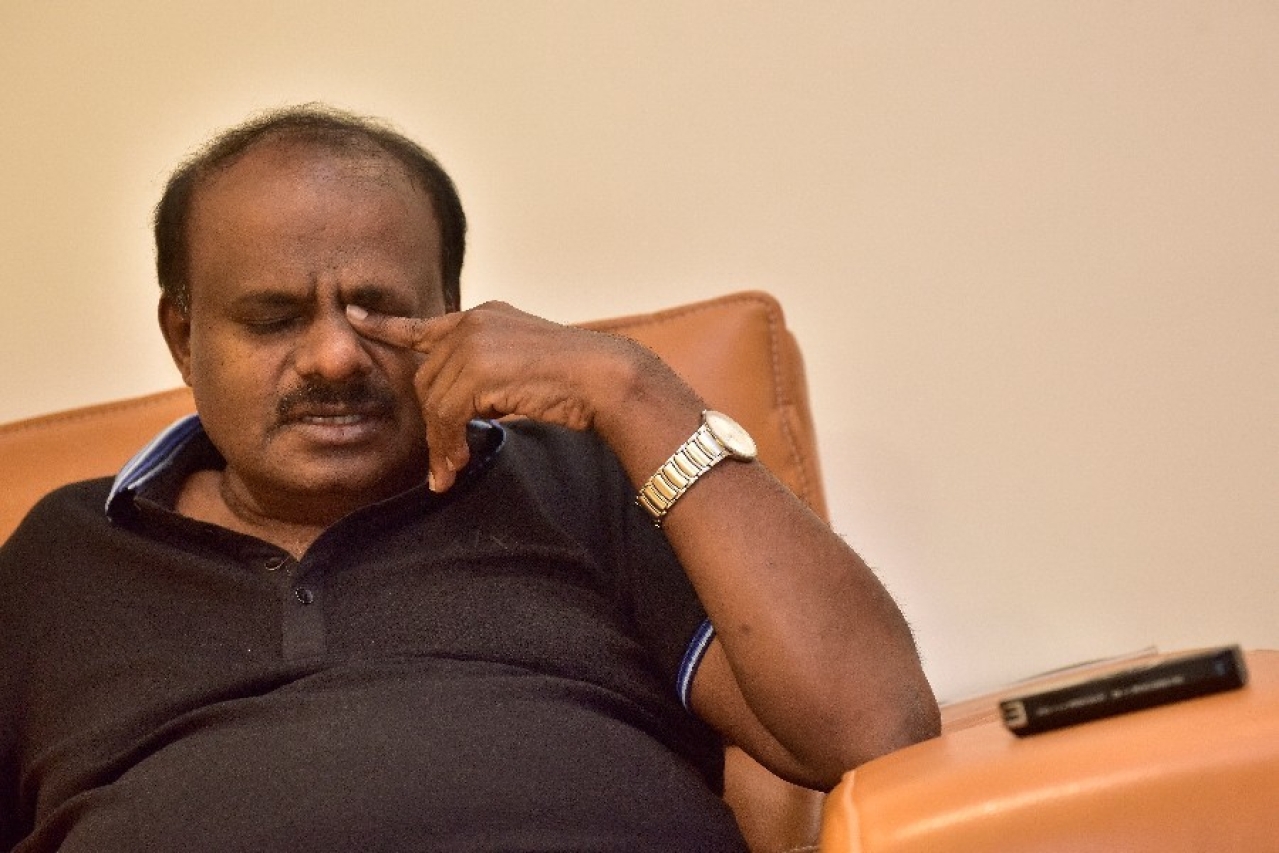 The hurriedly stitched up Congress-Janata Dal (Secular) or JD(S) alliance in Karnataka was to keep the Bharatiya Janata Party (BJP) at bay. The two parties won the first battle and installed a government, but today, the fact is that there is no cabinet in the state.

As part of the agreement between the two parties, the Congress gets 22 berths including that of the deputy chief minister and the JD(S), 12, including that of the Chief Minister. The two parties have not been able to come to any understanding on the allocation of portfolios. The JD(S) has asked for key portfolios such as finance and public works department and the Congress is not willing to concede.

It has been over a week since Kumaraswamy has been sworn in as the Chief Minister and till date Karnataka has no minister who can answer the people of the state. The issue was meant to be sorted out by Sunday during a meeting of the top Congress brass with Rahul Gandhi. However, the Gandhis have left on a foreign trip and that indicated that the issue would not be sorted until they returned.

The fact that this hurriedly stitched coalition is not on the same plate is evident from various facts. Chief Minister H D Kumaraswamy was miffed that the Congress had not taken any call on the portfolios. “I am at the mercy of the Congress, not the people”, he said. “I cannot take any decision without asking the Congress. I cannot do anything, they have given me support,” he added.

The problem for the alliance is that both sides are unwilling to give away too much. It has become a game of one-upmanship and the Congress does not want the JD(S) to end up scoring brownie points. For instance, the JD(S) had promised farm loan waiver in its manifesto, but that was absent in the Congress manifesto.

The other issue that has cropped up is with regard to the Vokkaliga vote base. The JD(S), which is headed by Vokkaligas, wants top officials from the community. The Congress is not in favour of this. The JD(S), which has been eyeing a third front at the Centre wants to bag a lion’s share of the votes in Karnataka and for it to do so, it has to eat into the Vokkaliga vote share of the Congress. The Vokkaligas have in the past been a major vote bank for both the parties. The JD(S) would need to win a good number of seats in 2019, if it has to have any say in a third front. The issue is similar for the Congress which is hoping to be the lead player in the joint opposition.

In this battle of one-upmanship, Karnataka has a government, but no ministers. There is a Chief Minister and a Deputy Chief Minister, and sources say that Karnataka will remain minister-less at least for another week.

The Congress argues that it has the higher number of seats and hence should get the better deal in the government. The battle is on for the finance, public works department, urban development, power and irrigation departments. Both sides are unwilling to let go of these portfolios, as a result of which no decision has been taken as yet. During the meeting between Rahul Gandhi and Kumaraswamy, these issues had cropped up and the talks remained inconclusive.

The other point of contention is D K Shivakumar, the man who held the flock together and warded any possible threat of poaching ahead of the trust vote which the JD(S) and Congress won amidst a BJP walk out. He was the first choice for the post of deputy CM, but the Congress overruled that in favour of Dr G Parameshwar. Shivakumar had gone out of his way and helped his party on several occasions and would want to be part of the Cabinet. However, JD(S) supremo Deve Gowda is against this. The rivalry between Kumaraswamy and Shivakumar is well known and each would like to have the better of the other.

Recently, Shivakumar had said that he had shown his large heartedness in accepting the decision of his party. It is now left to the father-son duo on how they treat him and his party men, Shivakumar said, while adding that he had been targeted but fought against all odds. Shivakumar is also a very popular Vokkaliga leader and this is another concern for Gowda and Kumaraswamy. Shivakumar had also said that he and Kumaraswamy had literally come to blows in the past. Adding that Kumaraswamy was egoistic, he said that both the father and son are threatened by him and they do not want him to grow.

While the Congress suggested that there was no problem, the fact is that there is no decision on the allocation of portfolios. Former chief minister Siddaramaiah said that they would need at least another three to four days to come to a conclusion. However, there would be no final call until June 4 or 5 when the Congress leaders are expected to meet and take a decision. The Congress is not just battling the JD(S) in the allocation of the berths, but is facing huge demands from within as well.

Many in the Congress feel the need to have a deputy chief minister from north Karnataka, preferably a Lingayat. However, the JD(S) is not in favour of that. B C Patil, who is from north Karnataka is lobbying hard for the post, but is facing stiff opposition from Shamanur Shivashankarappa who is a senior Lingayat leader.

Even if the Congress takes a week to finalise its list, the final allocation may take a few days more. It is only once the Congress approves its list, will the JD(S) work on its list of ministers, following which the matter would be brought to a conclusion. Looking at how things are shaping up, it is unlikely that this list would be ready in a week’s time. The end story is that Karnataka has a government, but no ministers to rule it.