Assam’s Ambubachi Mahayug: The Denigration Of A Hindu ‘Festival’ 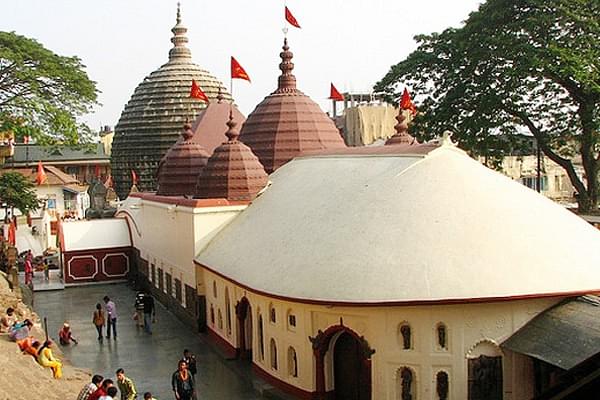 Like many other Hindu festivals, portrayal of the annual ‘Ambubachi mahayug’ at the Kamakhya mandir (temple) in Guwahati’s Nilachal Parvat by the media amounts to its sensationalisation and denigration. And to add salt to the collective wounds of Devi’s devotees, the Assam government terms the religious occasion as a ‘mela’ (fair), which amounts to its trivialisation.

The most popular images of the ‘mahayug’ are those of sanyasis with dirty dreadlocks and ash smeared on their bodies smoking a chillum of ganja (cannabis), of sannyasins practising some rituals and dancing in a trance, or of multitudes of devotees rushing for some free food. It is de rigueur for photographers, be they freelancers or professionals or affiliated to the print or the electronic media, to hunt for such sensational, and negative, images.

And then there is the trivialisation of the festival by the state government which designates it as a mela (fair). Guwahati, the capital of Assam, bears huge posters and hoardings put up by the state tourism department appealing to people to celebrate ‘Ambubachi mela’. On Thursday (21 June), Chief Minister Sarbananda Sonowal even inaugurated the ‘mela’. This, however, has been the practice for many years now and successive chief ministers have done the ‘honours’ every year.

Ambubachi (read this article on its immense significance), asserts the priests of the Shakti peeth, is not a mela at all. “We call it ‘Ambubachi mahayug’. The mela term is used by the state tourist department and very wrongly so. There has never been a mela associated with Ambubachi. It is a religious occasion,” said a member of the Bordeuri Samaj, the body of high priests that runs the temple.

The members of the Bordeuri Samaj are also peeved over the portrayal of the Ambubachi mahayug by the media. “Media has an important role to play in projecting a religious occasion properly. Sanyasis smoking ganja is not what Ambubachi is all about. There is hardly any portrayal of the tremendous devotion and piety of the lakhs of devotees who congregate on Nilachal Parvat to observe the mahayug. No newspaper or publication or TV channel bothers to educate the people about Ambubachi’s significance and its scientific basis. The media needs to be sensitive instead of being sensational,” said the priest.

This hunt for sensational images of semi-naked or cannabis-smoking sadhus is not limited to Ambubachi mahayug only; even the Kumbh Melas and many other Hindu religious festivals suffer from similar negative portrayals, deliberate or otherwise. “This (looking out for sadhus smoking pot (ganja) is part of the media’s pandering to the west and, wittingly or unwittingly, amounts to denigrating Hinduism and Indian culture. Media persons are, unfortunately, mostly insensitive and have no knowledge of their own religion and cultures. It is really shameful that even Guwahati-based journalists portray Ambubachi as a congregation of cannabis-smoking tantrics who indulge in sorcery. It is sad to see even the front-ranking media houses putting out something as shallow as Ambubachi being a celebration of the menstruation of Devi,” said another senior priest. Most journalists, he added, paint Kamakhya as the seat of sorcery and equate tantric practices with black magic when it is definitely not so.

The pujaris and pandas of Kamakhya mandir are also angry with the state’s branding the religious occasion as a mela. “This (calling the occasion ‘Ambubachi mela’) started many years ago when the state government started getting involved in a big way in preparations and logistics for the mahayug. And then politicians started inaugurating the mela. This is ridiculous. There is no way a religious occasion can be inaugurated. And what is worse is that the Chief Minister of a Bharatiya Janata Party government who would have been expected to know that Ambubachi is not a mela took part in the ridiculous circus. The fact that he inaugurated the mela by lighting a lamp showed he (Sarbananda Sonowal) is no different from his predecessors who had no knowledge of their own religion. This is very sad and shameful,” said the senior priest.

Many other devotees and religious scholars concurred with the senior priest. “The media should be sensitised and educated on the significance of the Ambubachi mahayug and on its scientific basis. And while the state’s involvement in the occasion is necessary, it should not term this occasion as a mela that is inaugurated by a politician. After all, Eid or Christmas are not termed as melas that are inaugurated by the Chief Minister, so also Ambubachi should not be reduced to the status of a mela by netas and babus (bureaucrats) who know little of the Ambubachi and its significance,” said Bhupen Sarma, a Sanskrit scholar who belongs to a family of high priests of the Kamakhya temple.

Sarma and others say that the media’s negative portrayal of Ambubachi and the state government promoting it as a mela amounts to a deliberate denigration of Ambubachi, as well as Maa Kamakhya. And this has to be put to an end to forthwith.