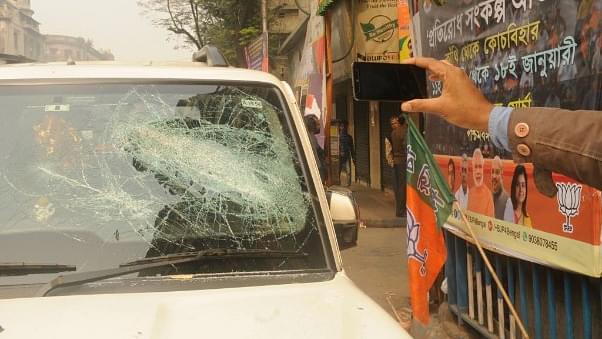 A BJP supporter’s damaged car in front of the party office after tension between BJP and Trinamool supporters in Kolkata. (Samir Jana/Hindustan Times via Getty Images)

Bengal has become infamous for political violence, which has claimed hundreds of lives, over the past few decades. And Friday’s attack by Trinamool activists on a bike rally organised by the Bharatiya Janata Party (BJP) is another shameful incident of political intolerance that marks the murky state of affairs in Bengal.

That the mega bike rally, called ‘Pratirodh Sankalp Abhiyan’, which was to cover the entire state from 11-18 January, would not have a smooth ride was evident from the beginning after the Bengal police denied permission to hold the rally. The much-maligned Bengal police, clearly acting on the orders of their political masters, cited the ongoing Gangasagar Mela and the rush of pilgrims as one of the reasons for denying permission to the BJP to hold the rally. But the Calcutta High Court intervened on Wednesday (10 January) and allowed the rally with some conditions.

The rally started from the Digha sea coast on Thursday (11 January) and was scheduled to end in the northern part of Bengal on 18 January. But even after the Calcutta High Court granted permission to the BJP to hold the rally, the state police tried to stop it at Digha. The police allegedly beat up rallyists and vandalised the venue from where the rally started. When the rally reached Kolkata on Friday (12 January), Trinamool goons allegedly attacked the rallyists at a few places. The rallyists and other BJP supporters hit back, leading to violence on some streets of Kolkata on the 155th birth anniversary of Swami Vivekananda.

In no other state of the country do programmes by opposition parties get so routinely opposed and thwarted by the state administration and the ruling party as in Bengal. It would, of course, be unfair to blame the Trinamool Congress solely for this pattern; it was actually the Congress under Siddhartha Shankar Ray (who infamously advised Indira Gandhi to impose the Emergency) that started this terrible trend. Ray used the state police and his infamous bands of goons and killers to take on the communists and the Naxals from the mid-1960s to the late 1970s. Hundreds of political opponents were jailed, tortured and killed during Ray’s chief ministership.

The Communist Party of India (Marxist)-led Left Front, which came to power in 1977, not only continued with the practice but even perfected it and made it part of state policy in dealing with the opposition. The Congress, and later the Trinamool Congress, became the target of bloody political attacks by the army of musclemen that the CPI(M) nurtured. Opposition activists were cowed into submission and the defiant ones were jailed on false charges, driven out of their homes and villages, assaulted and maimed or killed. During the 34 long years that the communists ruled over Bengal, hundreds of people were killed and tens of thousands suffered terribly.

For the first two decades, the CPI(M) was successful in keeping the opposition meek and submissive. In fact, as Mamata Banerjee alleges, the Congress leaders in Bengal became the ‘C’ team of the CPI(M). One of her famous jibes – that the Congress in Bengal was like a watermelon, green on the outside and red inside – gained a lot of currency during the 1980s. The CPI(M) started facing a challenge only after the formation of the Trinamool Congress in 1998. To be fair to Mamata, she never relented in her fierce opposition to the communists despite even being physically attacked a few times. Many Trinamool activists and supporters were murdered, incarcerated in jails on false charges and harassed or rendered homeless.

And after the Trinamool came to power in 2011, it has continued with the same policy of beating the opposition into submission. Its initial targets were the communists, but by the 2016 state assembly elections, the reds had paled into political insignificance in the state. The Trinamool did not spare the Congress, its parent party, and forced thousands of Congress workers (and many senior leaders) to join its ranks. Those who did not were beaten up and subdued. Now, with the BJP emerging as a strong opposition, it has become the obvious target of the Trinamool’s ire.

Despite laboured denials by senior Trinamool leaders, Friday’s violence would not have taken place had their cadres not attacked the BJP’s bike rallyists and workers. The latter had no reason to create trouble, more so when the Calcutta High Court had ordered strict monitoring of the bike rally and had even appointed an observer to track the rally. That the observer was attacked while he was accompanying the rally – and none other than Trinamool goons would have attacked him – exposes the Trinamool’s complicity in the attacks.

The Trinamool’s objective appears clear – create fear among workers and supporters of the BJP and demonstrate its muscle power so that the BJP’s growth in the state can be thwarted. The CPI(M), and before it the Congress, had also done the same. The common belief among Bengal’s rulers so far has been that creating fear is enough to keep them in power.

However, such tactics don’t work in the long run. The Congress could not stop the rise of the left even after all the killings and tortures it carried out. The Communists could not keep the Trinamool at bay through its terror tactics. It is surprising that Mamata – an astute politician, despite her numerous failings – has not learnt this essential lesson from the state’s recent political history and is following in the footsteps of the Communists, who tormented her so much. She needs to realise that the BJP, a national party with an overwhelming presence across most major states, will not take her tactics lying down. There is no way that the BJP, which is gaining support in Bengal, will allow itself to be cowed down by Trinamool terror.

Finally, Mamata, growing increasingly desperate with the BJP’s rise on her turf, will try hard to contain the BJP’s growth through force. With the BJP naturally not prepared to concede an inch, Bengal is unfortunately destined to witness growing political violence in the days and months to come.