Banerjee Is A Non-Entity Beyond Bengal’s Borders 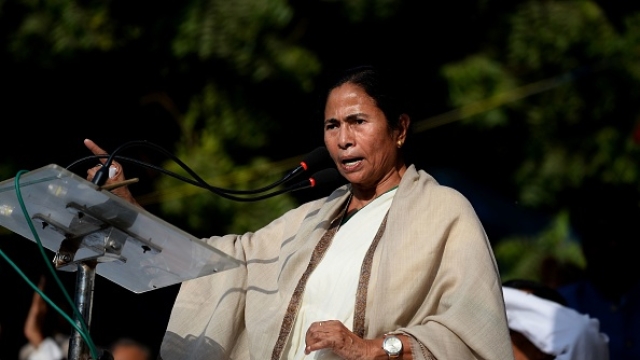 Mamata Banerjee’s vitriolic opposition to demonetisation has set her off on a Bharat yatra of sorts. The yatra has been fuelled by her dream of becoming the prime minister of India!

Banerjee is also of the firm belief that not only will the BJP-led NDA not get even a simply majority in the 2019 elections, the Congress will also fall far short of a majority. She will, she predicts, win nearly all the 43 Lok Sabha seats from Bengal, and with other parties like the Samajwadi Party, the NCP, the DMK, the RJD and the National Conference, can cobble together a coalition that will get outside support from the Congress to keep the NDA out of power. Since her Trinamool Congress will be the largest constituent of this coalition, that she dreams of, she will be the strongest contender for prime ministership!

The Trinamool chief does not have to wait till 2019 to find out that her presumptions and calculations are all completely flawed. She ought to have, by now, received enough indications about it. The first would have been on 17 November when she went to Delhi’s Azadpuri Mandi to address traders and daily wage earners. Not many turned up to hear her and after she spoke, many of those who heard her disputed her contentions and stand against demonetisation, as this report illustrates.

Her next public rant against demonetisation was at Jantar Mantar on 23 November. There too, as this video clip shows, the crowds were sparse. And no senior leader of any party joined her at Jantar Mantar. The day before she ventured to Azadpuri Mandi, Banerjee had marched to Rashtrapati Bhawan to tell President Pranab Mukherjee about the hardships she imagined people of India were being put through by demonetisation. No major politician joined her in that march, save for former J&K chief minister Omar Abdullah, who would have perhaps had nothing better to do that weekday afternoon in Delhi.

More evidence that she counts for little beyond the boundaries of Bengal should have hit Banerjee hard on Tuesday. Barely a thousand people, all Samajwadi Party workers deputed by Uttar Pradesh Chief Minister Akhilesh Yadav, attended the rally at Lucknow’s Gomti Nagar. Though Akhilesh Yadav had received her on her arrival at Lucknow’s Chaudhury Charan Singh International Airport, he gave Tuesday’s rally a total miss and deputed three ministers, who put in a brief appearance at her rally.

Banerjee’s speech, in heavily accented and highly-flawed Hindi, cut no ice with those who listened to her. She kept the crowds waiting for an hour – she was said to be trying to cajole Akhilesh Yadav till the last moment to join her rally – and when they ultimately learnt that he would not address the rally, most of them left without even bothering to listen to her, as this report from Lucknow elaborates.

Banerjee was supposed to head for Varanasi and address another public rally there on Wednesday. But perhaps judging by the indifferent response she received from the people of Lucknow on Tuesday, Banerjee may have realised she would receive a bigger snub by Prime Minister Modi’s electorate at Varanasi. And so she dropped her Varanasi plans and headed for Patna on Tuesday evening to address another rally on Wednesday.

No minister or politician received her at Patna’s Jay Prakash Narayan International Airport on Tuesday evening. Even Lalu Prasad Yadav, who she counts among her friends, didn’t deem it necessary to depute any party functionary to receive her. Chief Minister Nitish Kumar, who supports demonetisation, turned down her request to join her rally on Wednesday. Even though Banerjee, who was accorded state guest status, was put up at the state guest house just across the road from Nitish Kumar’s bungalow, he didn’t bother to go and meet her.

A desperate Banerjee went to Lalu Prasad Yadav’s residence on Tuesday evening and beseeched him to join her rally. For the benefit of camerapersons, she even hugged Rabri Devi. But behind closed doors, Lalu regretted his inability to attend her rally, saying he would however depute a senior party functionary to her rally on Wednesday. Lalu also told her he had decided to support demonetisation after a meeting with Nitish Kumar where the latter explained the benefits of Modi’s move to him.

Banerjee’s rally at Patna’s Gardanibagh was, as expected, a damp squib with barely a few hundred people attending it. RJD vice-president Raghuvansh Prasad Singh was the only senior non-Trinamool politician on stage. A frustrated Banerjee went on to vent her ire not only on Modi, but also on Nitish Kumar, who she called a traitor, thus exposing her strong streak of intolerance towards those who disagree with her. Probably to hide her embarrassment, divert attention from her spectacular failure in Patna and gain some public sympathy, she commissioned a trusted aide to level juvenile allegations about a plot to kill Banerjee by the BJP.

For instance, she would assume that the Aam Aadmi Party (AAP) would commandeer a decent crowd at a rally she hopes to address in Punjab. But there is no reason why the AAP would expend its energy or resources for her in a state in which it is a serious contender for power. That is why in Bihar, Nitish Kumar or Lalu Yadav did not attend her rallies and allow her to gain political mileage in their state. They, too, have prime ministerial ambitions.

Similarly, Banerjee, too, would not be very keen on helping a chief minister of another state address a rally in West Bengal. Leaders of parties she considers her allies also know about her strong dictatorial streak and how she has poached MLAs from other parties like the Congress despite having a huge majority in the state Assembly. “This poaching of MLAs from the Congress and the Left have exposed Mamata and proved that she does not believe in giving space to any other party. So why should other parties give her space in their turfs?” said Congress MP Pradeep Bhattacharya.

There are other reasons, too, for Banerjee’s acceptability not transcending the boundaries of Bengal. People of the country know that what she is demanding – a rollback of demonetisation – is an impossible demand. Everyone realises that Modi is no Manmohan Singh that he will succumb to any sort of pressure. While other politicians are criticising the implementation of the demonetisation scheme, she has tried to go one up on them by demanding that the entire scheme be scrapped. Her attempt at oneupmanship has only exposed her foolishness and political immaturity.

Banerjee is also seen as a tainted politician. Many in the rest of the country believe she and her party benefitted from the Saradha scam. People believe senior Trinamool leaders accepted huge sums of money collected by Saradha and other chit funds from poor people of Bengal and some neighbouring states. Those leaders continue to be her close aides and, hence, she is also held to be guilty by association with them. Hence, her voluble campaign against corruption is seen as hypocritical.

Banerjee has, thanks to her own actions in the past, acquired the image of an irresponsible and undependable politician. Her frequent tantrums as minister in the Atal Behari Vajpayee and Manmohan Singh governments, her issuing threats and deadlines to those prime ministers and her frequent resignation dramas did immense harm to her image and established her as a flippant and mercurial politician.

Banerjee is also seen to be a poor administrator – as railway minister, she did little for the Indian Railways, and her tenures as coal, human resource and development, youth affairs and sports and women and child development minister are quite forgettable. She failed miserably to utilise her time in the Union government to prove to the people of the country that she possesses even the minimum governance skills. Instead, as Union minister, her attention was always focused on Bengal and she did absolutely no justice to the portfolios she held.

She is perceived to be dictatorial and intolerant of contrary opinions or dissent. Her propensity to fly off the handle even in public is well known to the people of India. Episodes like her branding of a poor farmer who question her government’s farm policies at a public rally as a ‘Maoist’ and getting him arrested is fresh in people’s minds. As is the ugly episode of she walking away from an interview on an English TV channel after being asked uncomfortable questions by students at Kolkata’s Town Hall. Or the arrest of a Jadavpur University Professor who shared some innocuous cartoons poking fun at Banerjee and her senior colleagues on Facebook.

All these make her an eminently unsuitable candidate for prime ministership. Also, politicians like Nitish Kumar, Mulayam Singh Yaday, Lalu Prasad Yadav, Nitish Kumar, Sharad Pawar and others are far too politically mature, savvy and intelligent than Banerjee and have been major and successful players at the national level, unlike her. She is totally out of her depth at the national level.

So her assumption that they would make her the prime minister in the event of the Congress or the BJP failing to win a majority anytime in future is completely naive. They also know that the mercurial Mamata with her zero governance skills would make a mess of everything if she were to ever become the prime minister, and the blame for that would then fall on those who put her on that post. So why take the blame for her failings and misdeeds? She does not inspire any trust at all.

It is, thus, high time Banerjee realises that she is chasing a pipe dream. Instead, she should concentrate on Bengal and pull the state out of the morass she, and her two predecessors – Jyoti Basu and Buddhadeb Bhattacharjee – have thrown it into. But that would, again, be expecting too much of her.