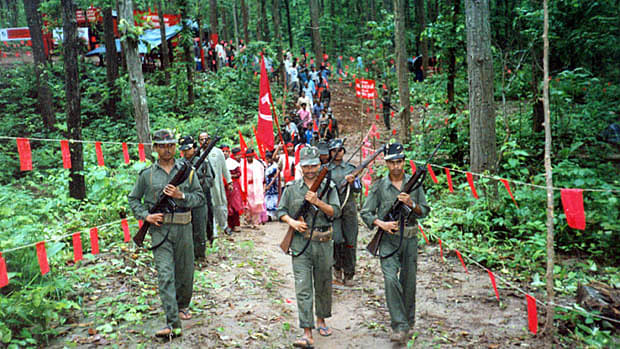 A naxalite camp in Bastar.

It is fashionable among leftists to deride monarchs and monarchies. They have no objection to new hereditary leaders – the Nehru-Gandhis, the Trudeaus, the Assads – but kings and queens are objects of derision.

Conservatives know the value of legitimate institutions like monarchies. Our Founding Fathers and that outstanding duo – Sardar Vallabhbhai Patel and V P Menon knew it well. Rajas and Nizams were retained. The Maharaja of Jaipur was reincarnated as a Rajpramukh and in order to cater to the sensitive situation, the Maharaja of Udaipur was called a Maharajpramukh.

Jawaharlal Nehru invited the said monarch to come to the citadel of Delhi in 1947. The gracious Maharaja did what his ancestors had sworn never to do until Delhi was really free – at least in his family’s assessment. Even the obdurate Nizam was made a Rajpramukh. By a clever sleight of hand, the story was spread that the Nizam was wise and reasonable and had been the victim of Qasim Rizvi and the Razakars rather than what many felt was the other way around. This made Hyderabad’s integration that much easier and eliminated the possibility of an international dispute bubbling up.

The entire exercise referred to as the “integration” of states was successful precisely because “change”, and radical change at that, was accompanied by an aura of “continuity”. The ancient Indian tradition of monarchy was adapted, rather than thrown away. That two decades later, Indira Gandhi went back on the solemn promises of our founding fathers is another story.

Some of the princes and princesses had been stupid enough to oppose the Congress Party and win elections. They were made to pay a price for such audacity and grovel before the new socialist Rajas of India. The so-called liberals who supported the abolition of privy purses and the princely order, should not have been surprised when five years later, the iron lady directly assaulted the rights of all citizens of India. The guillotine wielded first against hated aristocrats almost always gets used soon after, against hapless citizens.

Monarchies are particularly important for fragile societies. Afghanistan has had problems for centuries. But a reasonably legitimate king held it together. Its descent into a long night of darkness began precisely when the king’s own uncle deposed him and precipitated an inevitable civil war.

The refusal of radical republicans to be satisfied with a constitutional monarchy in Spain, almost inexorably led to the Francoist reaction, whose ill-effects finally got resolved precisely by restoring a constitutional sovereign.

In recent times, the destruction of the Nepalese royal dynasty, brought about by the ruling family’s penchant for stupidity and violence, has meant that republican Nepal teeters between anarchy and chaos. The centre simply does not hold and “mere anarchy is loosed upon the world”.

Belgium remains a horror show where the Flemish and the Walloons are unable to agree on simple measures to provide security to their capital and where the country is periodically plunged into mysterious, salacious scandals. The only person who seems to keep the country together is the monarch, who is Belgian, not Flemish and not a Walloon.

Thailand is another interesting case. If the Thais ever get rid of their monarch and opt for fashionable republicanism, the country will fall apart and the ensuing civil war could result in unexpected outcomes – none of them sanguine.

In Thailand’s neighbourhood itself, the disappearance of the Bao Dai resulted in decades of fighting and misery for the Vietnamese people.

Norodom Sihanouk and Sisavang Vatthana in neighboring Kampuchea and Laos maintained balance in delicate societies. Their removal did not result in freedom or prosperity for their people. Au contraire, the citizens of both countries were cursed with violence and disarray.

The princely state of Bastar had been managed by the British (or should we refer to them as the wise British) from a distance with relatively benign indifference. The post-independence Maharaja of Bastar was a charismatic ruler, much loved by his adivasi subjects (sorry, fellow-citizens). His name was Pravir Chandra Bhanj Deo. He had been educated in the Rajkumar College Boarding School at Raipur (again set up by the perfidious British).

He was by all accounts proud of his people’s heritage, jealous of their rights and eager to ensure that there was appropriate development in Bastar. This unfortunate ruler made a cardinal mistake. He contested and won the 1962 elections trouncing his opponent from the Congress Party. A few years later, he was made to pay for this egregious blunder. He was summarily dismissed as the Maharaja and the Government of Madhya Pradesh went after him with vim and gusto depriving him of various properties by quoting sections of the new Land Reform Laws, which were almost always selectively implemented against political adversaries.

In 1966, Pravir Chandra and dozens (hundreds?) of his supporters were brutally killed by the police in an early example of an “encounter”, which of course at that time was not condemned by any human rights activists. Killing a popular king was perhaps considered rightful as long as the killers were the right people! Having used the guillotine on the king, are today’s human rights NGO-s surprised that now it is the turn of others?

The long night of the people of Bastar began with that brutal murder. Pravir Chandra was an intelligent leader. With him as a credible intermediary, the Indian state could have negotiated an appropriate combination of development and conservation. He was no Luddite. He was just committed to his people and to his Raja Dharma, an expression that genuine socialists cannot spell, let alone understand.

He was also the High Priest of Danteshwari Devi. Socialists found another reason to hate him. Bastar’s agony has not yet ended.

As noted earlier, fragile societies benefit from legitimate, benign, neutral (between groups of subjects/citizens) and welfare-driven institutions, like monarchies. Take them away and the ensuing scramble for power and civil war leaves victims for decades on end. This is precisely what has happened in Bastar.

Today, the government of India and the government of Chhattisgarh have no one to negotiate with. Our adversaries are rag-tag groups of assorted tribes as well as sinister “outsiders” who have imported the ideology of Yunnan and Cambodia and Naxalbari into an ancient sylvan atmosphere. Some have turned into rogues and bandits. The peacemakers and the rational ones are repeatedly silenced.

The state which 50 years ago made the cardinal mistake of bumping off the ideal interlocutor, continues to move between a show of force and political accommodation with unknown, unseen, disparate and unorganised opponents.

Perhaps it is time for the government of India to practise some magnanimity and farsightedness and reach out to the descendants of Pravir Chandra. Getting them on board, perhaps giving Bastar a Union Territory status with a popular Rajpramukh might just make the difference. The political pressures against such a move will be enormous. There is also the case that so much water and so much blood has flown past Danteshwari’s temple that this approach just might not work. One wonders if there are other options, though.

Incidentally, this would not be very different from Spain bringing a royal family back after a long period when they experienced first a Republic and then a Dictatorship.

In any event, when the post-modern academics of today advocate radical change, it would behoove them to at least pause for a minute and consider the counter view of conservatives that monarchs and monarchies are not institutions that should be casually rubbished.