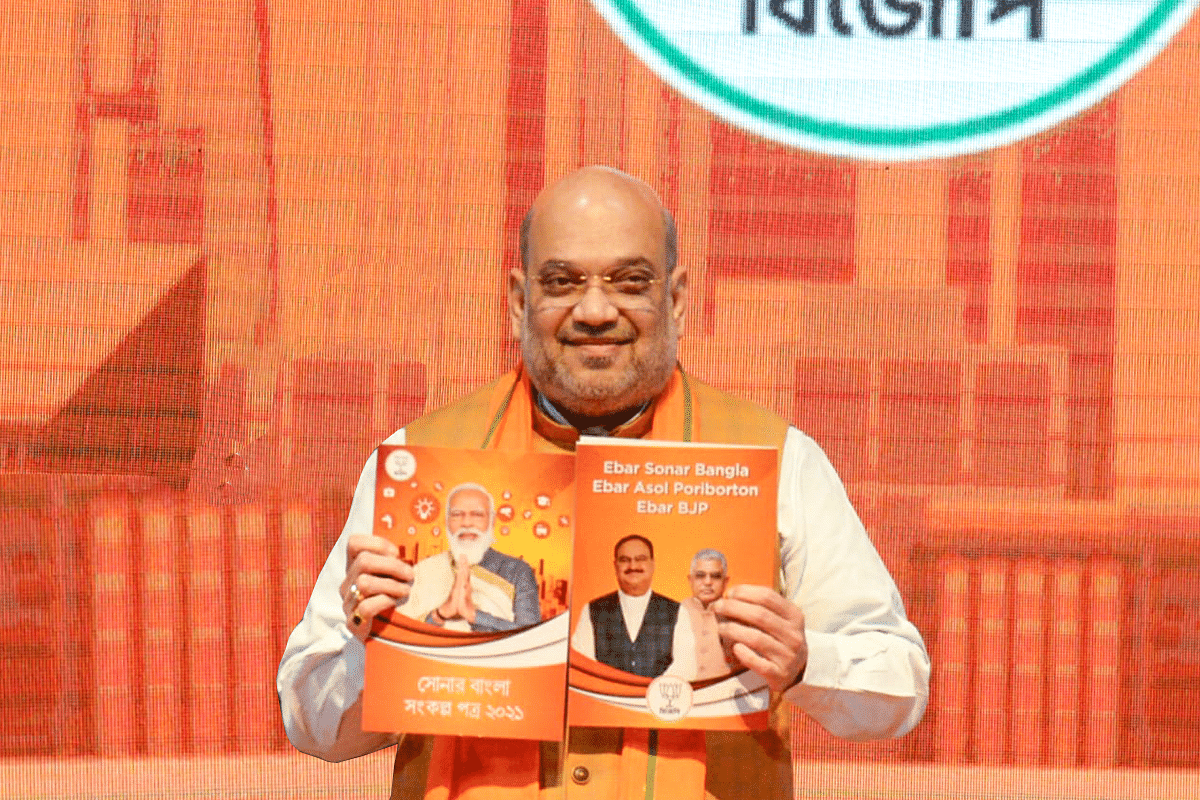 The BJP’s Sonar Bangla Sonkolpo Potro released by Union Home Minister Amit Shah in Kolkata on Sunday evening is a 62-page manifesto, which took months in the making and involved consultations with more than 10,000 people from various walks of life.

The document not only tugs at the heartstrings of Bengalis, but is also packed with concrete measures that hold the promise of lifting the state out of the poverty and despondency it has sunk into since the days of Left rule.

The manifesto’s knockout punch is the section on women. That’s because women (apart from Muslims) have formed Mamata Banerjee’s solid support base.

The measures for women's empowerment and uplift are:

-33 per cent reservation in government jobs,

-free education to all girls from kindergarten to post-graduation level,

-tripling pensions for widows to Rs 3,000 a month,

-Rs 5,000 crore for women SHGs and setting up of 12 women-only battalions in the state police.

Divided neatly into 13 sections, the manifesto promises attractive and substantive measures for farmers and youth, for ushering in good governance, enhanced healthcare, boosting the state’s infrastructure and tourism sector, accelerating Bengal’s economic development, protecting the environment, ensuring development for all, restoring the lost cultural glory of the state, and promises a special focus on development of Kolkata and North Bengal.

Apart from financial assistance of Rs 10,000 a year to 75 lakh farmers under the Prime Minister’s Kisan Yojana, the BJP has also promised to provide three years’ arrears (Rs 18,000) to the farmers of Bengal who had been deprived of the benefits of this Central scheme.

A Krishak Surokkha Yojana (Rs 4,000 a year to all landless farmers and sharecroppers), setting up a Rs 5,000 crore fund to ensure remunerative prices for farm produce and a Rs 20,000 crore agriculture infrastructure fund, free education (till graduation) to all children of landless marginal and small farmers, Rs 6,000 a year to fishermen, setting up a Rs 2,000 crore fishing infrastructure fund, free insurance cover of Rs 300,000 for small and marginal farmers and fishermen and Rs 1,000 crore for boosting milk production in the state are the highlights of the section dealing with farmers.

BJP's manifesto promises a job for at least one member of every family, establishing BPOs in every block, subsidised loans for startups, vocational training centres in every block and a Rs 20,000 crore fund to create robust school infrastructure.

This section of the manifesto also promises to set up 100 new government colleges and 50 polytechnics, establishment of a sports university and creating sports infrastructure in every block and providing free books, bags, bicycles, school uniforms and digital tablets under Shohoj Path scheme.

The major promises here are implementation of Ayushman Bharat with free healthcare of up to Rs 5,00,000, establishment of three AIIMs, a Rs 10,000 crore health infrastructure fund, doubling the number of seats in medical and nursing colleges by 2025 and eradicating malaria and dengue by 2025.

Besides setting up a ‘Bangla Economic Revival Task Force’, the manifesto promises a slew of financial incentives for startups and MSME units, setting up food parks, handloom and handicrafts hubs and enhanced facilities for various industrial sectors.

Free concrete houses with proper toilets and drainage to all, round-the-clock power supply and free electricity (up to 200 units) for households, Rs 2,00,000 crore fund for rural infrastructure development, Rs 30,000 crore for urban infrastructure development, a Rs 10,000 crore fund for ensuring round-the-clock supply of potable water to every household, building a 675-kilometre expressway as a new lifeline of Bengal, Rs 1,00,000 crore for a robust road network, nearly Rs 15,000 crore for improving road transport and public bus terminals, launching Metro Rail in Siliguri, upgrading Bagdogra airport to an international airport and operationalising four new airports in the state are the highlights of this section.

There is also the promise of a Rs 11,000 crore ‘Sonar Bangla’ fund for making Bengal the cultural capital of the country, setting up ‘Gurudev Centre Of Cultural Excellence’ in all state capitals and in some major destinations abroad to promote and showcase Bengali culture, building a world-class ‘Sonar Bangla Museum’ in Kolkata to exhibit Bengal’s rich cultural, literary, artistic and intellectual legacy, celebrate January 23 (Netaji’s birthday) as Parakram Divas across the country on a grand scale and get Bangla recognised as one of the official languages at the United Nations.

Setting up Annapurna canteens where meals at Rs 5 will be provided, universalising the PDS, subsidised rations to PDS beneficiaries, implementation of the Citizenship Amendment Act, assistance of Rs 10,000 a year to every refugee family for five years, implementation of Seventh pay commission recommendations for state employees, increasing salaries of para-teachers, enhancing senior citizens' pension and providing financial assistance to auto and taxi drivers are the salient points of this section.

Apart from making Kolkata the centre for all financial services, the manifesto promises a Rs 22,000 crore fund to make Kolkata a ‘city of future’.

Building smog towers, extension of metro rail network to major satellite conglomerations like Dhulagarh, Serampore and Kalyani, a solution to the city’s traffic blues and many other far-reaching measures have been promised to restore the city’s lost glory.

The BJP’s manifesto sets out a concrete roadmap for the state’s economic, educational, cultural and industrial rejuvenation.

Political analysts say that while the BJP’s manifesto can be termed as visionary, the Trinamool’s manifesto contains doles and unimplementable promises.

“It is evident that unlike the Trinamool’s manifesto that only lists the largesse that will be given out to various sections of society, the BJP’s manifesto is the result of a long consultation process and a deep intellectual exercise. It is well-crafted and lays out a bold vision for transforming Bengal,” said Ranjit Dhar, a former teacher of economics and Calcutta University.