Battleground MP: BJP, Congress, Or Others – It All Boils Down To Caste-Effectiveness 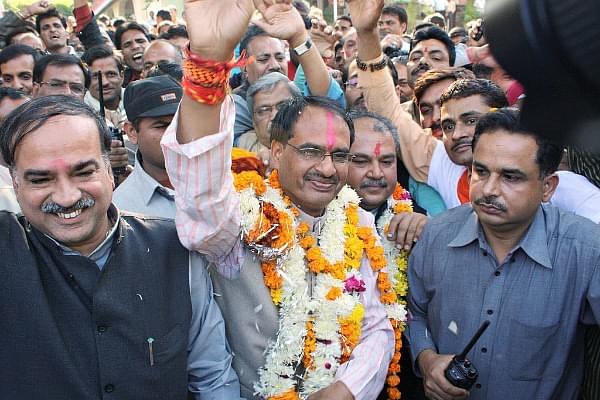 The scenario in Madhya Pradesh (MP) is heating up as we approach election date. While Chief Minister Shivraj Singh Chouhan has embarked on a state-wide Jan Ashirwad Yatra, the Congress is trailing the route with its Poll Khol Yatra. Allegations and counter allegations are flying thick and fast. Two recent surveys have given contradictory predictions. While Dainik Bhaskar survey has predicted that the Bharatiya Janata Party (BJP) will retain office, ABP-C Voter poll has predicted a Congress win.

Caste is an important factor across states in elections in India. The general perception is that caste rules the roost in Hindi-speaking states. However, an ADR survey in Karnataka revealed that even in the southern state, 67 per cent people are likely to vote on the basis of caste. About 55 per cent of Indians prefer a political leader from their own caste and religion, found the study, ‘Politics And Society Between Elections 2018’, carried out by the Azim Premji University (APU) and Lokniti. Madhya Pradesh leads the pack with 65 per cent in the survey.

After the Mandal movement, caste politics has dominated elections in many states. However, MP was untouched. Digvijay Singh’s term from 1993 to 2003 confirms this. Caste politics came to the centrestage in MP in 2003 when BJP anointed OBC leader Uma Bharti as its CM candidate. Madhya Pradesh has 33 per cent Other Backward Class (OBC), 22 per cent upper castes, 21 per cent Scheduled Tribes (ST), 16 per cent Scheduled Castes (SC), 6 per cent Muslims and 2 per cent others. BJP has traditionally received the support of upper castes and OBCs, while the Congress of SCs, STs and minorities.

In Madhya Pradesh, after Digvijay Singh, the three chief ministers, Uma Bharti, Babulal Gaur and Shivraj Singh Chouhan, all come from the OBC community. BJP state head Rakesh Singh and former state Pradesh Congress Committee (PCC) president Arun Yadav also hail from the OBC community. This class is unhappy with the Congress for removing Arun Yadav unceremoniously from the post. In such a situation, if the Congress does not manage to convince the community, it may suffer losses in the elections.

Congress is trying to activate OBC leaders from Gujarat such as Alpesh Thakur and Patidar leader Hardik Patel. If we take a look at the previous elections, BJP has on an average received 45 per cent and Congress 29 per cent OBC votes. In the 2014 Lok Sabha elections, OBC support for BJP increased to 66 per cent on the back of consolidation as the PM hails from the community. One-third of BJP votes in 2013 were accounted for by the OBCs.

The traditional voter of the BJP, the upper castes, are unhappy with the party because of the reasons listed below:

SC-ST votes have traditionally been with the Congress. In 2003 and 2008, Congress received more support from these groups than the BJP. However, in 2013, BJP outscored Congress and received higher support. As many as 82 seats in the Madhya Pradesh assembly are reserved for the SC-ST bloc. There are 137 constituencies where SC-ST population is more than 20 per cent. The Bahujan Samaj Party (BSP) enjoys 14-15 per cent support among SCs but has negligible traction among STs.

The BJP has tried to allay the fears of the SC-ST bloc by nulling the Supreme Court judgement and trying to compensate for the loss of some upper caste votes. However, OBCs and SCs, as well as upper castes and SCs, have a history of antagonism and are unlikely to vote together. With a section of upper castes unhappy with the BJP, SC-ST voters could play the role of kingmaker this time around. To return to power, the BJP has to target a minimum of 40 per cent support from the SC-ST bloc, while the number would be much higher at 60 per cent for Congress.

Many Muslims Vote For Shivraj

Madhya Pradesh is one of the states where BJP gets considerable Muslim support. As much as 14 per cent of Muslim voters in the state vote for BJP. Shivraj Singh Chouhan has a secular image, which helps.

Who wins Madhya Pradesh, has generally been decided by 45 per cent of the votes. In such a situation, BJP must keep its flock of traditional voters, the upper castes and OBCs together. If a Congress-BSP alliance materialises, BJP will have to look at a 48 per cent vote share to ensure victory. On the other hand, Congress is trying to create cracks in the core vote bank of BJP. Like Gujarat, both main parties could gain vote share at the expense of other smaller parties.

How BJP And Congress Can Get To The Magic Figure

In the end, it all boils down to caste combinations in each seat, and which party gets it right. The social engineering formula of the BJP nationally is targeted towards unifying the Hindu vote, but this could face challenges in MP as it is very difficult to keep all sections of the society happy.