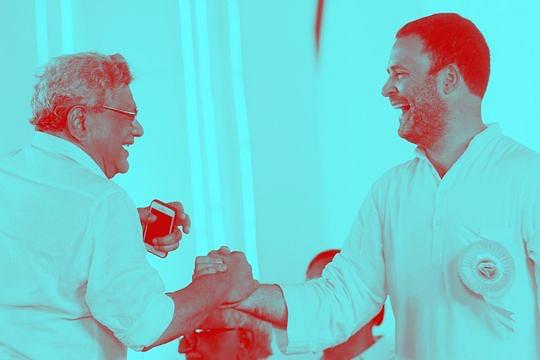 All those crowing about the just-announced electoral alliance between the Congress and the Left in Bengal and predicting its bright prospects in next year’s state Assembly polls will, in all probability, have to eat humble pie.

For, the alliance--an opportunistic one given that the two are sworn enemies in Kerala--is most likely to emerge as a distant third in the electoral battle.

The alliance enthusiasts--mostly Delhi’s ‘Lutyens lobby’ and the ‘Khan Market gang’--are offering a simplistic explanation for their flawed forecast.

They cite the results of the 2016 Assembly elections where the Congress-Left combine, which had an electoral understanding then, bagged 76 seats and 37.7 percent vote share.

This (Congress-Left) ‘third front’, feel its votaries, will be able to repeat its 2016 performance and may emerge as the king-maker after the polls in the likely event (according to them) of the BJP and the Trinamool failing to win a majority of the seats.

The ‘third front’ will then extend support to the Trinamool, or join hands with Mamata Banerjee to form the government, to keep the BJP out of power.

What, however, is not taken into account by these poll ‘pundits’ is that in 2016, the BJP was a small player in Bengal. The saffron party is now the primary contender for power in the state.

Also, the political landscape in Bengal is much more polarised now than it was in 2016. The BJP had just come to power at the Centre two years ago (in 2014) and was yet to be perceived by Bengal’s electorate as a strong pan-Indian force that can beat the Trinamool at its own turf.

Also, in 2016, though there was considerable disenchantment with Mamata Banerjee and her party, the Trinamool had deployed considerable muscle-power to beat back the opposition.

Next year’s Assembly polls will present a different picture since the BJP is strongly countering the Trinamool’s muscle power, something that the Congress and Left did not have the wherewithal, the courage and the stomach for.

The BJP has dramatically beefed up its organisational muscle in Bengal over the last three years, and more so after the Lok Sabha polls last year where its handsome performance stunned the Trinamool.

Hence, the Trinamool will not be able to intimidate voters and misuse the state machinery as it allegedly did in 2016.

The reasoning advanced by the ‘third front’ enthusiasts that Left and Congress voters migrated to the BJP in the 2019 Lok Sabha elections and will now return to the respective camps since the two have formed an alliance is deeply flawed.

They believe that since the Left and the Congress fought the 2019 Lok Sabha polls separately, the two were weak. Hence, Left and Congress supporters voted for the BJP, which they perceived as a strong force, in order not to waste their votes.

And now that the Congress and Left are allies, they are stronger together and will present a viable non-Trinamool and non-BJP alternative.

The truth, however, is that the committed supporters of the Congress and the Left, though a dwindling lot, have remained loyal.

All those who voted for the BJP in last year’s Lok Sabha polls did not do so because they perceived the Left and the Congress to be weak or because they were disillusioned with the Trinamool.

The BJP did well in Bengal last year on its own merit and because it could project its own strength.

The vote for the BJP was a positive vote and to say that the saffron party gained because of a negative vote against the Trinamool and because of perceived weakness of the Congress and the Left is untrue.

These conditions hold more true for the 2021 Assembly polls. The BJP is not only successfully campaigning against the Trinamool and highlighting the ruling party’s misdeeds and misgovernance, it is also setting a positive agenda for itself.

The Congress has its own pockets of loyal voters in Murshidabad and Malda districts while the Left also has its own committed voters. They will vote for the parties of their choice with or without the two entering into an alliance.

The Congress-Left combine won 76 seats--the Congress bagged 44 and the Left 32--not because the 37.7 per cent of the electorate who cast their votes were committed voters and loyalists of the two political entities.

That was because the Congress and the Left harvested the anti-Trinamool votes. The BJP was a weak force and was not perceived to be a viable alternative then.

It would be pertinent to note here that the Left won a meagre 32 of the 203 seats (15.76 per cent strike rate) it contested while the Congress’ strike rate was a more respectable 47.8 per cent (it won 44 of the 92 seats it contested).

As has already been said, public perception of the BJP has changed dramatically and the saffron party is, in public reckoning, a strong contender for power in the state unlike the Left and the Congress.

The ‘third front’ enthusiasts also advocate a board alliance or Mahajot against the BJP comprising the Trinamool, the Congress and the Left.

They point out that in the 2015 Assembly elections in Bihar, a Mahajot of the RJD, JD(U) and Congress had got the better of the BJP and formed the government.

It is another matter that in 2017, the same Mahajot came unstuck because of its own contradictions and the JD(U) was back with the BJP.

The advocates of such a Mahajot appear to be out of touch with ground realities in Bengal. The electorate is completely polarised between the Trinamool and the BJP, and there seems to be little room for the Congress and the Left in Bengal’s current political landscape.

Due to the current political polarisation, there seems little possibility of the anti-Trinamool vote going to the Congress-Left combine or the anti-BJP vote going to any entity other than the Trinamool.

What the Mahajot advocates also forget is Bengal’s recent political history. The Left and the Congress have been arch rivals since Independence and from the late 1960s till the end of Left rule in the state in 2011, their political rivalry has been gory.

The Trinamool and the Congress fought the 2011 Assembly elections as allies, but the pact did not last long since the expansionist Trinamool started luring away or intimidating Congress functionaries.

State Congress chief Adhir Ranjan Chowdhury knows this only too well and has, thus, been assiduously keeping the party away from the Trinamool.

Given this history, the chances of a Mahajot between the three is remote. Also, even if the three get together for the sake of political expediency, there is no way that the alliance will last or will be able to deliver any good to Bengal.

Those advocating a post-poll alliance between the Congress-Left combine and the Trinamool also seem to be throwing political morality to the wind.

The Congress-Left combine will, no doubt, be campaigning against both the Trinamool and the BJP. It will fight the polls on the anti-Trinamool and anti-BJP plank.

To then join hands with the Trinamool (to keep the BJP out of power in the event of a hung Assembly) after having campaigned against that party would smack of political immorality.

But the moot point remains that come what may, there is little prospect for the Congress-Left combine of reaping any significant electoral dividends in Bengal next year.