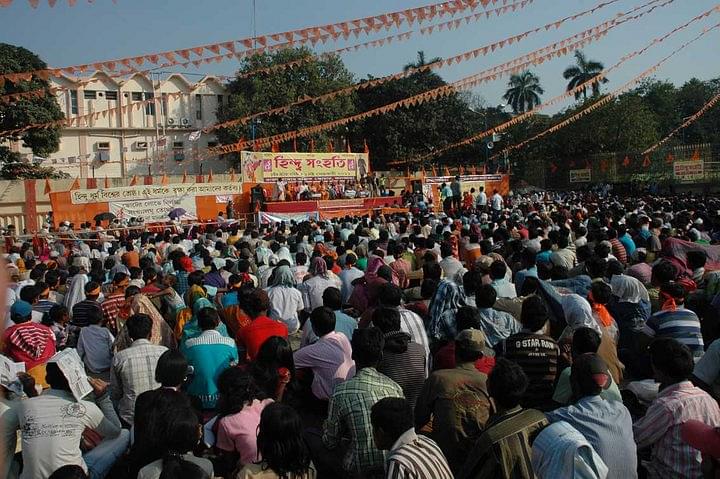 Bengal Chief Minister Mamata Banerjee has good reason to be worried: her blatant minority appeasement policy has started triggering the anticipated blowback from Hindus. Hindus have, in small but growing numbers, started gravitating towards Hindu Samhati, an apolitical body formed nine years ago to unite the Hindus and protect the rights of the community.

Till last week, the Hindu Samhati was considered to be a fringe group with limited appeal and following. The collective wisdom in media and political circles in Kolkata has been that Mamata’s unchallenged sway over Bengal will ensure that such an organisation attracts but few supporters. And with Trinamool Congress (TMC) never shying away from unleashing its goons on anyone seen as a challenge to the party, there was little scope of anyone mustering the courage to even covertly support an organisation which poses a direct challenge to the TMC. After all, even established political parties like the CPI(M) and Congress had succumbed to the Trinamool’s strong-arm tactics, so how could a non-political Hindu organisation rear its head in Bengal’s landscape?

But this collective wisdom was shaken to its roots on 14 February 2017, when more than one lakh people from all over Bengal, and some from the rest of the country and even abroad, turned up for a rally to mark the foundation day of Hindu Samhati. The rallyists were a determined lot, and unlike the ones who are 'brought' to Mamata’s so-called ‘mega’ rallies, were not paid to attend it. They made it on their own on trucks, on buses, by train and even on foot out of sheer conviction and courage. What’s more, they were not deterred by attacks on them by militant Muslims in at least a dozen-odd places in the districts around Kolkata. Heads bandaged, broken arms cast in plaster, faces and bodies bruised and battered, they nonetheless made it to the heart of Kolkata where the rally was held. And their presence enthused the others to not only make common cause with them but to resist the aggression by Muslim fundamentalists who have been targeting Hindus.

The one lakh-odd people who flocked to central Kolkata to attend the rally knew they would be targeted by Trinamool goons once they return to their homes. And they have been. But that did not deter them from journeying to Kolkata. It was, after all, a matter of faith, a battle to safeguard their religion and their way of life. They were all very ordinary folks, all very poor or lower middle class that make them more vulnerable to the ruling party’s strong-arm tactics. But, the fact that they braved the odds and didn’t care about what miseries Mamata would bring upon them in future, is indicative of the fact that a slow churning is taking place in rural Bengal against Mamata’s policy of minority appeasement that has emboldened Muslims to attack and loot Hindus, Hindu homes and business establishments and temples.

The mammoth crowd at the Hindu Samhati’s rally stunned the know-all journalists in the mainstream media and the Trinamool. But they need not have been so surprised. Mamata’s appeasement policy--the granting of stipends to Muslim clergy, the grant of many favours to them, the favouritism shown towards Muslims in matters of jobs and contracts and the fact that a major slice of many welfare measures implemented by the state are being cornered by Muslims with the active connivance of Trinamool leaders--has triggered a lot of resentment among the Hindus who feel discriminated against and deprived.

At the same time, Mamata’s courting of hardline Muslim leaders had greatly encouraged radicals within the community. The fallout is an alarming increase in the radicalization of Muslims in Bengal. These radicalised Muslims have carried out a series of attacks on police, police stations, temples and Hindus over the past few years. And the state administration under Mamata Banerjee has simply looked the other way.

Naturally, Hindu anger has been simmering and has found an outlet in support for the Hindu Samhati because, the have displayed grit and courage, in not only standing up for Hindus in Bengal but also taking on the Mamata Banerjee government. That is why the crowd, which numbered barely 200 when the organisation held its first foundation day rally in 2009, numbered over a lakh eight years later this year. That is why the organisation’s president, Tapan Ghosh, is finding increasing acceptance among Hindus facing Muslim aggression in Bengal. Hence, more and more Hindus in Bengal, even though they are still not very many in numbers, are responding to Tapan Ghosh’s clarion call to all Hindus to unite and resist Muslim aggression.

The Hindu Samhati’s appeal among Hindus who face Muslim aggression lies in the fact that the organisation does not shy away from taking on the state government when it comes to securing the rights of Hindus or safeguarding it own rights. For instance, has been holding rallies in the heart of Kolkata despite police not granting permission for the rallies.

“Do Muslims who gather in Kolkata to hold rallies against Taslima Nasreen, or in support of the killers in the 1971 Bangladesh liberation war, or when they hold funeral prayers for Osama bin Laden, ever bother to seek police permission? If the police does not stop them, what right do they have to refuse permission to us?” asked Hindu Samhati vice president Devdutta Maji. In 2014, Kolkata Police told Samhati leaders that loudspeakers wouldn’t be allowed since school-leaving exams were round the corner and students would be disturbed. “We told the police that Hindus coming to our rally would pull down all loudspeakers from mosques they see on their way since, those loudspeakers also disturb students. The police quietly backtracked,” added Maji. This sort of righteous aggression is finding increasing resonance among many Hindus who are fed up with the aggressiveness of radical Muslims who want to drive away Hindus from villages, stop Hindus from doing any puja and stop worship of murtis of Gods and Goddesses.

The Hindu Samhati’s message to its supporters is clear: they will have to ensure their own safety without any outside help. “We tell our supporters they should be prepared to sacrifice their lives for their religion. We are all prepared to die for our faith and for upholding our faith and our way of life,” asserts Maji. Hindu Samhati leaders claim that as against the more than one lakh who attended last week’s rally, the actual number of supporters is a few times more. And they cut across the political divides. Mamata Banerjee should, thus, be worried. Deeply worried.