Bharat Mata Shrouded: Don’t Be Surprised By What Happened In Kanyakumari; Hindus Of District Have To Bear Evangelist Aggression Day In, Day Out 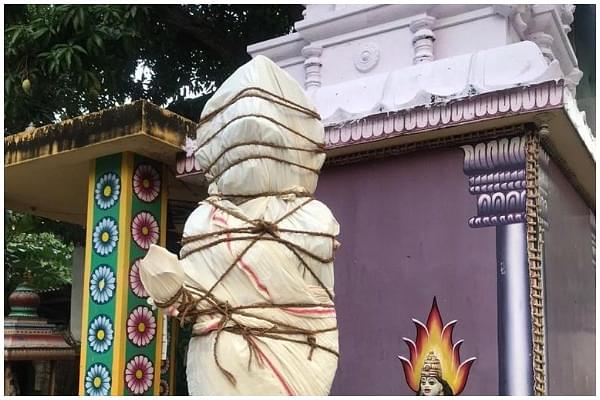 The covering of a Bharat Mata sacred idol by the police in Kanyakumari, even though the idol is installed within a private temple compound, has created a national outrage, thanks to social media.

The Organiser has come out with a thorough report of this shameful incident designed to humiliate Hindus.

In a way, this new low in the evangelist-police aggression against Hindus of Kanyakumari district, is another milestone in the process of making Kanyakumari an evangelist version of Kashmir.

And it started long ago.

When patriotic Indians, irrespective of religion, wanted to construct a rock memorial for Swami Vivekananda during his birth centenary celebrations in 1963, the Church instigated the coastal community to oppose it.

Late Eknath Ranade had to undertake a Bhagirath-like effort to not only make the rock memorial a reality, but also the Vivekananda Kendra — as a movement for revitalising society.

But for the Hindus in the district, troubles were far from over.

Hindus in Kanyakumari have been living under a virtual Christian evangelist siege and aggression for the last two centuries.

Temple destruction has been a regular, taken-for-granted feature of this aggression.

Hindu temples and Hindu sacred objects of worship not only get destroyed but are made parts of the new churches built.

The major churches in the district thus incorporate the materials plundered from Hindu temples and places of worship, in them.

After Independence, the evangelist aggression of the Church was channelised into intentionally building huge churches near Hindu places of worship.

Consider the following Tehsildar report written after villagers in a predominantly Hindu village gave a complaint about a mega church coming up in their area.

Today, one can see that huge church dwarfing the sacred and simple shrines of indigenous religions.

It shows and boasts of the power of predatory evangelism that is strangling the spirit of Kanyakumari district.

Once they even wanted to change the name of the district to ‘Kanni Mary’ (Virgin Mary) district.

It is said that when the late Indira Gandhi, as prime minister, was shown the plans of the missionaries for Kanyakumari, she was shocked.

But now, the Congress almost appears to be an ally of the evangelists.

In 1981, the evangelists showed their clout by taking out a huge procession under the leadership of the then Member of Parliament, N. Dennis.

In this procession, derogatory slogans were raised against Hindu gods and the march witnessed violence at many points.

The 1982 Mandaikaddu riots were the result of this aggression going unchecked and being appeased.

The communal riots started when some Christian fanatics, inebriated with alcohol, started molesting Hindu women who had come to the Mandaikaddu Goddess temple.

This temple is well known as the Sabarimala of women.

The police team at the spot, which included a Christian sub-inspector as well, had to open fire on the Christian fanatics.

To this day, eleven Hindus who were abducted by the Christian fanatics are missing.

The riots ended only after Hindus started retaliating in an organised way.

Today, there is peace with underlying tensions. Conversions happen by stealth and whenever a village becomes Christian-majority, the Hindu temples in the area are attacked.

These attacks are usually reported in the local edition of the evening dailies.

Even though there are reporters of national newspapers in the district, they usually choose to look the other way.

These incidents of religious aggression are not considered news worthy by the mainstream, national news publications.

On the other hand, any retaliation or reaction of Hindus is promptly reported as yet another case of ‘Hindutva violence’.

Years before Kashmiri Hindus became refugees in their own nation, the Hindus of Kanyakumari faced similar adversity in their own district.

Below, one can see various reports of attacks on Hindu temples that happened right from the 1980s to 2007-08.

The Rashtriya Swayamsevak Sangh (RSS), the Hindu Munnani, Bharatiya Janata Party (BJP), Hindu Makkal Katchi and a few other organisations always come in the forefront to fight for Hindus.

Christian fanatics have the strength of institutions and they enjoy political clout as well.

The defeat of the Vajpayee-led National Democratic Alliance in 2004 was a turning point in the fragile peace that was existing between the communities.

Vigrahas of deities — particularly the Vana Devatas and Grama Devatas — were broken and thrown away.

It is said that there have been times when crosses were planted in place of the deities but the police removed them from the scene in order to avoid ‘communal clashes’.

However, that can be said to be among the kinder acts of the local police.

A case in point is the violence that happened in a Goddess temple in the district in 2008.

The road in front of this temple belonged to the local Panchayat. The local Hindu community leader had even given a piece of his land for the common water tank on the same road.

The village is still a Hindu majority one.

But evangelists succeeded in building a church at the end of the road and followed it by claiming the entire road as belonging to the diocese and stopping the annual procession of the Goddess.

They were careful not to do it when the the Vajpayee government was in power and when Pon. Radhakrishnan was the MP.

Once the BJP was defeated, the evangelist forces started rearing their head.

The result was bloody.

On the day of the procession, Hindus were attacked.

Even women were not spared and one woman died in the police action.

The very next year, in 2009, a Hanuman statue, installed with approval from all government authorities, was forcefully removed when Christian fanatics demanded so. Despite Hindus from all neighbouring villages assembling and opposing the act, the statue was removed by the district authorities.

Thus, it has become a routine in Kanyakumari district for the evangelist forces to humiliate Hindus and violate their basic human right to worship.

It is also an indication of what would happen in any part of the country where such forces of monopolistic expansionism become strong.

All these forces need are a critical population mass and political patronage.

For outsiders, it may be shocking that Hindus in Kanyakumari, worshipping Bharat Mata well within their own personal sacred space, could be threatened by the police, for the Hindus in the district themselves, it is yet another day in their perennial struggle for true secularism.

However, there now is a change. There is social media. There is democratisation of news dissemination.

We can reach out to the larger Hindu population. Because there is now a BJP government at the Centre, Hindus have been spared further humiliation in this incident.

Had it been a UPA government, it is likely that the Hindus would have had to suffer violence at hands of the police, apart from enduring humiliation.

That is why when some people criticise Modi for his alleged inaction over their own pet Hindu causes, which every Hindu should seriously sympathise with and endure for, we Hindus in Kanyakumari district know how important it is for the BJP to be in power — So that we can live as Hindus and with the basic human dignity in this ever aggressive evangelist crusade arena.