But For Modi, Sikkim’s New Airport Would Still Be Under Construction 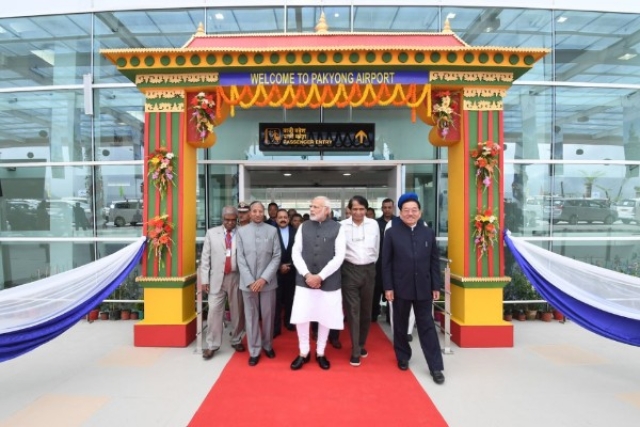 It has taken 17 long years for Sikkim’s Pakyong airport, which was inaugurated by Prime Minister Narendra Modi on Monday (24 September), to come up. And had it not been for the Prime Minister, it would still have been a work in progress.

The construction of the greenfield airport, whose foundation stone was laid by (then) vice president Krishna Kant in 2002, was progressing at a tardy pace till 2015. “The construction was plagued by many engineering issues and protests by locals over inadequate and delayed compensation. The eastern Himalayas is unstable and the loose soil, rocks and gravel posed a tremendous problem. Retaining walls used to cave in and collapse and construction was a huge challenge,” said a senior Airports Authority of India (AAI) official.

In early 2015, less than a year after coming to power, Prime Minister Modi ordered a review of the entire project and asked the Civil Aviation Ministry, including the AAI, which had been tasked with overseeing the airport’s construction, to address all issues and complete the construction of the airport before the end of 2018. “Experts from Indian Institute of Technology (IIT), Kharagpur, were roped in to address the problems in engineering and construction and the entire amount of compensation due to the 165 families whose lands were acquired for the airport, and the 55 families whose houses suffered damage due to the construction, was released to the state government,” said the AAI official.

The airport is an engineering marvel of sorts since entire hilltops had to be shaved off. “About 200,000 square metres of hills had to be shaved off to get a flat and even surface for the airport. We had no institutional experience in constructing a tabletop runway and landslides triggered by frequent rains delayed construction. The earthquake that devastated the state in 2011 held up construction for more than a year. There were logistical problems and even labour disputes,” said the official.

Though the foundation stone of the airport, which has cost Rs 553 crore so far, was laid in 2002, actual construction began only in 2009, and the airport was to have been commissioned by 2012. But little progress could be made till 2015. According to top officers of the Union Civil Aviation Ministry, in early 2015, Prime Minister Modi asked the Ministry and the AAI to get going on the airport. The Sikkim government was also asked by the Prime Minister’s Office (PMO), which was tasked by Modi to closely monitor the progress of works, to pull up its socks and sort out the land compensation issues. That this (land compensation) issue is still dragging on is another matter.

The Prime Minister’s intervention and the frequent review meetings by Jayant Sinha ever since he took over as Minister of State for Civil Aviation in July 2016 set the project on the fast track. “For Sinha, it was a project close to his heart since he was instrumental in formulating the National Civil Aviation Policy, of which the regional connectivity scheme named Ude Desh Ki Aam Naagrik (UDAN) is an integral part. Sinha took a lot of interest in ironing out all issues and ensuring that timelines were charted out and adhered to very strictly,” said a director-level officer in the Ministry.

Experts from the Indian Institute of Technology, Kharagpur, came up with techniques to prevent landslides and landslips. “There were some sinking zones that had to be stabilised with the IIT engineers’ help. A special engineering technique was devised by the IIT engineers to construct and reinforce the retaining walls by the sides of the runway to prevent landslips and stabilise the 1700-metre long runway. Had traditional earth-cutting methods been deployed to shave off the hilltops, the airport would not have been ready even in 2020. IIT engineers devised a special earth-cutting technique to hasten that work,” said an AAI engineer.

But the most intractable issue proved to be that of compensation for land losers and others affected by the construction of the airport. In fact, even as Modi was inaugurating the airport on Monday (24 September), the Sikkim High Court was hearing petitions filed on behalf of the project-affected people (read this and this report). The High Court had asked the state government a few times in the past to provide adequate compensation to the affected families who have alleged that though the Union government has sanctioned a generous compensation package and disbursed the entire amount to the state government, the latter was sitting on the money and not disbursing the entire amount to them. The PMO has asked the Sikkim government to address the concerns of the affected families by the end of this year.

The Pakyong airport, spread over 202 acres, can handle five lakh passengers a year. The first commercial flight will touch down at Pakyong from Kolkata on 4 October, while another flight from Guwahati will start operating from 16 October. The airport can now handle only ATR and Bombardier CRJ aircraft, though there are plans to upgrade the runway to enable landing of Airbus A-319 and A-320 and Boeing 737-800 aircraft by next year. Pakyong is India’s 100th airport. Till 2014, India had 65 airports, many of them built by the British. In the four years since, 35 airports have been added to the country’s aviation map and, according to Civil Aviation Minister Suresh Prabhu, a hundred more airports will become operational over the next decade.

Apart from boosting trade and exports from Sikkim, the airport, situated just 60 km from the Indo-Tibet border, will also add military muscle to the country’s defences. Pakyong can easily handle fighter jets and transport aircraft of the Indian Air Force and is, thus, a force multiplier. Apart from its commercial and strategic importance, Pakyong airport also offers breathtaking views of the surrounding landscapes during takeoffs and landings. The airfield, on a north-east–south-west axis, is surrounded by lush mountains and, on a clear day, the entire Kanchendzonga range is visible to fliers.