From A Hindu To A Communist: The Political Journey Of Somnath Chatterjee 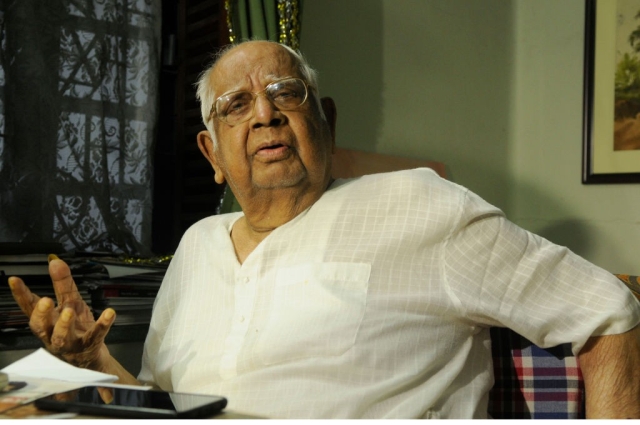 Had it not been for Jawaharlal Nehru, former Lok Sabha speaker Somnath Chatterjee, who passed away in Kolkata on Monday morning, would not been a communist. In fact, he would in all probability been a dharmic.

In 1948, when Nehru banned the Communist Party of India (CPI) and sent its leaders to jail, prominent jurist and a stalwart of the Akhil Bharatiya Hindu Mahasabha, Nirmal Chandra Chatterjee, was outraged enough to form the All India Civil Liberties Union and take up the cause of the jailed communists. Nirmal Chatterjee, a London-trained barrister and father of Somnath Chatterjee, got close to Jyoti Basu at that time. And it was Basu’s insidious influence that led to Somnath Chatterjee’s introduction and indoctrination to communism.

Nirmal Chatterjee, who also served as a judge of the Calcutta High Court, was a staunch critic of Nehru and that was what perhaps led him to oppose the arrest of the communist leaders. He was also a devout Hindu and believed that the Congress would never protect the interests of Hindus. In his book Awakening Of India, Nirmal Chatterjee wrote of the importance of teaching Hindu scriptures and India’s ancient heritage to children and inculcating in them a pride of the country’s Indic culture and traditions. The family was also close to Shyama Prasad Mukherjee, a rising star of the Mahasabha then.

Nirmal Chatterjee’s wife (and Somnath’s mother) Binapani Devi was an extremely devout lady and, from a very young age, taught the scriptures to her sons. She insisted that they take part in daily pujas and other religious rituals. Somnath Chatterjee, thus, grew up learning about the shastras and as a practising Hindu. His father once boasted to his friends that his younger son (Somnath) was such a dharmic that he would one day become a stalwart of the Hindu Mahasabha. Nirmal Chatterjee used to take his younger son to Mahasabha events and from an early age, Somnath Chatterjee had evinced keen interest in the Mahasabha’s philosophy and activities.

But, as they say, fate intervened and Jyoti Basu started getting close to Nirmal Chatterjee from 1948. Basu, despite his communist pretensions, was a very class-conscious person and found it easy to bond with the genteel Chatterjee family. Apart from their similar social and economic backgrounds - Basu’s father was an affluent doctor and belonged to the landed gentry, as did the Chatterjee family - the two also found similar ground in their training as barristers in London. Basu became a frequent visitor to the Chatterjee household from 1949 and started working on the young and impressionable Somnath, who had just emerged out of his teens at that time.

Somnath was quite taken up by Basu’s erudition and personality (Basu was about 35 years old then). Sensing an opportunity, Basu started weaning Somnath away from his dharmic and Indic roots and began planting the communist ideology in Somnath. Basu also introduced Somnath to other communist leaders and started taking him along to party meetings. Nirmal Chatterjee, who by then had got very close to Basu, never objected. He is reported to have told a friend who raised the issue with him once that he was confident his younger son would eventually outgrow his adolescent fascination with communism. How wrong he was!

Nirmal Chatterjee contested India’s first general elections in 1952 as a Mahasabha candidate from Hooghly and won easily. But by that time, he and his entire family had come under the influence of Basu and his communist cohorts. So much so, he resigned from the Mahasabha soon after the end of his Lok Sabha term in 1957. Meanwhile, it was at Basu’s insistence that Somnath Chatterjee went to London in 1950 to study law. Basu ensured that Somnathgot to meet leaders of the Communist Party of Great Britain (who had also indoctrinated Basu when he was pursuing his law degree there), especially Rajani Palme Dutt. The communists in England enthusiastically completed Basu’s unfinished task of turning Somnath Chatterjee into a die-hard communist and when Somnath returned to India and set up his law practice in Kolkata, he was already completely indoctrinated. Somnath formally joined the Communist Party Of India in 1968.

Nirmal Chatterjee passed away in 1971 and his younger son Somnath, who was already a member of the CPIU by then, contested from Burdwan in the general elections held that year and won from that constituency. And the rest, as they say, is history. Somnath Chatterjee remained close to his mentor (Basu) till the latter’s death in January 2010. Their friendship remained unaffected even after Somnath was expelled from the CPI(M) in July 2008 for defying the party and continuing to remain as the Lok Sabha Speaker. The CPI(M) had asked him to step down as the speaker after the party withdrew support to United Progressive Alliance - 1 over the India-US nuclear deal and vote against the government in the Lok Sabha. Basu had also advised Chatterjee to follow the party’s diktat.

Somnath Chatterjee, who married into a wealthy family of zamindars (large landowners), passed away at the upscale Belle Vue Clinic, the preferred medicare address for many poverty-professing personas of Bengal, including Basu and Mother Teresa.