Caste, Brahminism And J&K: The Vacuous ‘Intellectualism’ Of Arundhati Roy 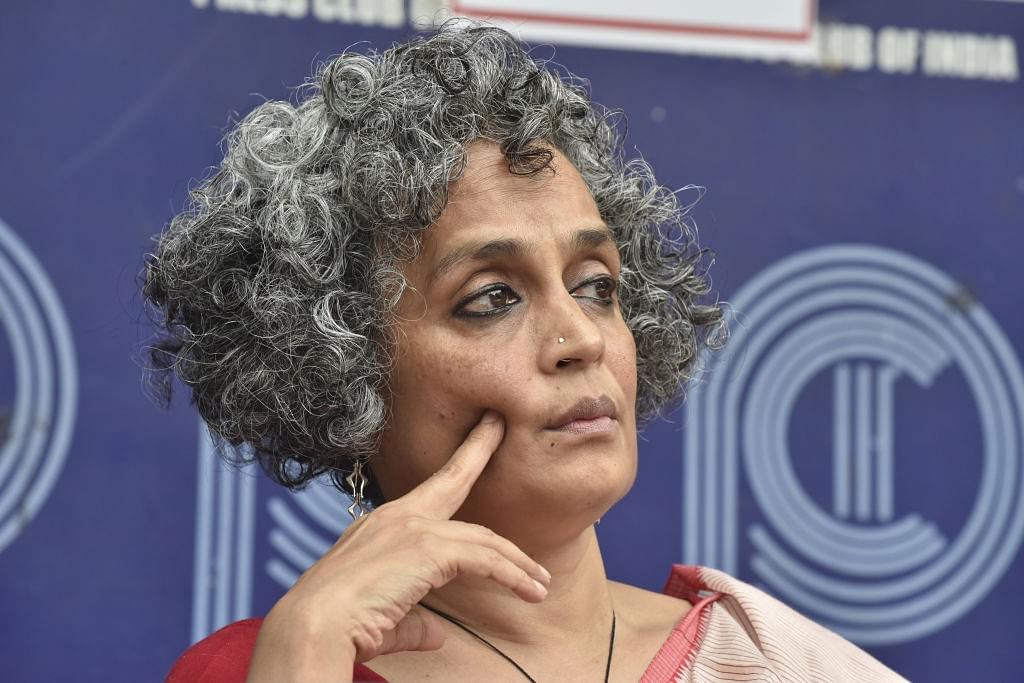 Arundhati Roy, winner of the Booker Prize, has for quite some time been touted and trumpeted around everywhere as a great progressive intellectual of India. She is invited abroad often, and also within India, to attend functions, where she speaks of injustices in Indian society. Our so-called 'Leftists' and 'progressives' hear her attentively and nod their heads.

While she often attacks many of the ills in our society, in my opinion, her pose and self-projected image of being an intellectual and a progressive is a facade. It is time the mask is taken off.

I have carefully read and heard her, and found her totally superficial, having no scientific understanding of anything.

She attacks the caste system, and to this no right-minded person can object. But she goes further and attacks specific castes like Brahmins and Vaishyas, and it is here that she turns reactionary and discloses her lack of scientific understanding.

In her article India's Shame, and in her book The Doctor and the Saint, Roy writes that the upper castes (particularly Vaishyas) are rich, and Brahmins have a disproportionate number of government jobs, jobs in the judiciary, the media, etc, while Dalits are poor and less educated. She quotes Khushwant Singh's article “Brahmin Power” from the 1990s which says Brahmins are 3.5 per cent of India's population but hold 70 per cent of government jobs. She quotes B R Ambedkar, who said that in 1948, in the Madras Presidency, Brahmins were only 3 per cent of the population but held 37 per cent of the gazetted and 43 per cent of non-gazetted jobs. She also says that Brahmins today are not pundits but Supreme Court judges, governors, diplomats, etc. In a TV interview, she said there was a hidden Brahmin hand behind the Narendra Modi and Indian propaganda. She regularly uses the word 'Brahminism', which naturally offends Brahmins, instead of using the neutral words 'caste system' for an attack.

She says “caste cannot be annihilated unless those who call themselves revolutionary develop a radical critique of Brahminism”.

Throughout these years, Roy has carried on attacking Brahmins and Brahminism, and supporting the cause of Dalits. I submit that this has really harmed Dalits instead of benefiting them.

While ostensibly criticising the divide-and-rule policy, in fact Roy supports it by attacking certain upper castes.

It is true that Brahmins had (and probably still have) jobs disproportionate to their population, but there are also a lot of poor and unemployed Brahmins and other upper castes even today. Secondly, this must be understood historically and scientifically.

In my blog The Caste System in India, I have explained how the caste system had developed into the feudal occupational division of labour in society. Every vocation in feudal society, like carpenter, potter, smith, leather worker, etc, became a caste. There was also a small section of society, the Brahmins, doing intellectual work (which was mainly theological), who were the priestly class, and they were almost the only educated class in feudal society, their language being Sanskrit (just as the educated class in Europe were the priests, whose language was Latin).

There was no system of universal education in feudal society, and so the Brahmins, being almost the only educated class, got a head start over others, and when British rule came to India they quickly learnt English. This is why there were a disproportionate number of Brahmins in government jobs, and as professors, lawyers, judges, etc. So, it is not that Brahmins are intellectually superior to non-Brahmins, but they had an advantage over others due to certain historical reasons and hence they got more jobs, etc. Now, of course, other castes have also advanced.

No one can deny that even today Dalits are often treated disgracefully and as inferiors. But the solution to the problem is not by Dalits attacking the upper castes, but rather their allying with the enlightened sections of the upper castes and jointly fighting against feudal ideas and feudal practices. There are many enlightened Brahmins and other upper castes who will join hands with Dalits in this struggle.

Roy's statement that the caste system can be destroyed only by “developing a radical critique of Brahminism” is meaningless, and only reveals her empty-headed and fatuous thinking. Do these words make any sense?

The caste system can only be destroyed by a mighty historical united struggle by Indians under a modern-minded and scientific leadership, but such struggle is yet to be seen. Instead, what we see are caste-based struggles like those of Patels and Jats, or religion-based ones like the Ram Mandir agitation. The farmers’ struggle had no scientific leadership, and so fizzled out. So, caste will continue for many more years, though the struggle against it must go on.

Another example of Roy’s vacuous advocacy is Kashmir. She has consistently demanded azadi for Kashmiris. If it could be demonstrated that by getting greater autonomy, the standard of living of Kashmiris would go up, there could possibly be some case for supporting the demand. But the truth is that the leaders of the people demanding azadi are reactionary Islamic fundamentalists. If Kashmir gets azadi under their leadership, it will become a theocratic state and revert to the medieval age, with Sharia being enforced (ie women being stoned to death for adultery, and limbs of thieves being chopped off) and women being compelled to wear the burqa. Roy conveniently overlooks this vital aspect.

I am not questioning Roy's bona fides, or the bona fides of many of our self-proclaimed 'intellectuals'. What I am saying is that for an intellectual, good intentions alone are not enough. He or she must also have a deep scientific understanding of the issues involved, which most of India's 'intellectuals' lack.

Today, India's main problem is how to abolish the remnants of acute poverty, unemployment, and malnourishment, provide good healthcare and education for the masses, and give our citizens decent lives. Our 'intellectuals' have no clue how that is to be achieved.

We borrowed from the British a parliamentary form of democracy, but in India it really amounts to appealing to, and relying on, caste and communal vote banks. Can our country move forward when its politics is based on feudal forces? If not, what is the alternative to parliamentary democracy, and how is that to be achieved? These vital questions our 'intellectuals' never contemplate or seriously address.