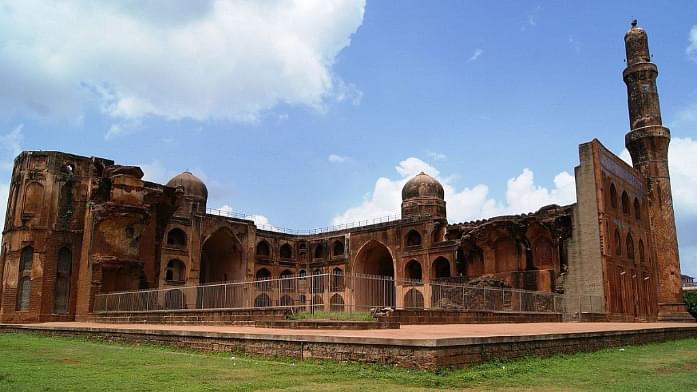 Mahmud Gawan Madrasa in Bidar, Karnataka, was built by Mahmud Gawan, the Vizier of the Bahmani Sultanate as the centre of learning in the Deccan. (Prasannasindol/Wikimedia Commons)

Hampi, now a temple complex in Ballari district of Karnataka, was once the heart and soul of the epoch-making Vijayanagara Empire. The Battle of Talikota, fought between the last Vijayanagara king, Rama Raya, and the united Bahmani Sultans of Deccan (Ahmednagar, Berar, Bidar, Bijapur, and Golconda) in January 1565 struck a death blow to the glory of this empire.

After more than 500 years, at a time when the peace-loving populace of Karnataka has forgotten this tearful saga, the Siddaramaiah government in Karnataka plans to celebrate an utsav commemorating the reign of Bahmani kings, who defeated the Vijayanagara Empire.

According to media reports, on the final day of the state-sponsored event, slated for 4-6 March 2018, the Karnataka government, through its Kannada and Culture Department, plans to celebrate Bahmani Utsav remembering the Bahmani Sultanate rule in Kalaburagi region of Karnataka. While the Chief Minister appeared to distance himself from the reports, his cabinet colleague and Kalaburagi district in-charge, Sharan Prakash Patil, not only confirmed the reports but also sought to justify it on grounds that people have the right to know who ruled them in the past and what their contribution was.

Noted historian and linguist Chidananda Murthy has registered his protest saying that celebrating Bahmani kings, who sabotaged temples, is unjust. The Bharatiya Janata Party has already opposed the move, and protests from many other sections within and beyond Karnataka seem very likely if the state government remains adamant about its plans.

The Utsav comes as a sequel to Tipu Jayanti, celebrated under state patronage for a few years now. It is generally understood that the government’s decision is aimed at communal polarisation of the electorate in the wake of the forthcoming state assembly elections scheduled during April-May 2018.

The North Karnataka region has been a victim of historical neglect by successive regimes. For Muslims, as well as for others in the region, the root concern remains poverty resulting from landlessness. The upcoming celebrations by the state will end up pushing this issue on the back burner.

Apart from creating a rift between people, this move by the state government will jeopardise the communitarian interest and sideline the pressing problems of Muslims in the state. No ordinary Muslim or scholar has ever espoused the need for celebrating “Jayantis” or “Utsavs” to mark the lives of Muslim rulers in Karnataka. Many of them, in fact, at least privately, have been criticising the state for disturbing communal harmony for electoral gains.

The Kalyana region of Karnataka, comprising Bidar, Yadgir, Raichur, Koppal, Ballari, and Kalaburagi, have always been characterised by a harmonious social milieu arising from their syncretic religious and social traditions. The defeat of the Vijayanagara Empire by the Bahmani Sultanate is an event from the remote past and not something that occupies the minds of people today. This kind of election-time opportunism of the Congress party perturbs harmony in the region and should therefore be avoided at all costs.