Central Vista: A Great Opportunity To Revive Hindu Architecture Has Been Missed 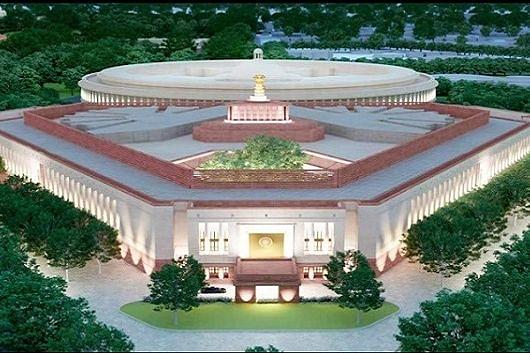 An artist’s impression of the new Parliament building.

Prime Minister Narendra Modi is at the receiving end of criticism from his professional critics, again. No, I am not talking about the ongoing protests by Punjab farmers on the Delhi-Haryana border but about the bhoomi pujan of the new parliament complex performed by him last week.

The opposition has voiced its disdain for the Central Vista Project, which involves the new parliament building. A case has been filed in the Supreme Court which has halted the ambitious project even though it allowed the bhoomi pujan ceremony to go ahead.

The government announces a policy. The opposition, true to its name, opposes it. The professional protesters hit the streets. The legal opposition knocks on the doors of the apex court to stop the government. It seems that Modi can do nothing right in the eyes of his ideological enemies.

Nonetheless, one can understand why they are so incensed at this seemingly harmless exercise of rebuilding the central vista of the national capital. The person India’s elites mocked and demonised for more than a decade is going to leave a permanent legacy in their own Lutyens backyard that will stare at their faces for decades to come.

One can rename schemes or discontinue the policies of political rivals after coming to power, but one will have to do so while sitting in homes and offices designed and built under Modi’s premiership. His opponents can’t stomach the fact that a former chaiwala will leave a grander legacy on the architectural front than their Cambridge educated Jawaharlal, the first and last prime minister to have shown interest in the field.

The Modi government has bet huge on infrastructure. It is building expressways, airports and naval ports, modernising railway stations, revamping heritage sites across the country, including India’s temple towns from Varanasi to Ayodhya to Kedarnath to Dwarka to Hampi, laying tracks for a bullet train, launching high speed railways, reconstructing scores of government buildings, including the new parliament, and the residences of the prime minister and the vice-president, among many other projects.

In the next five years, it has set a highly ambitious target of spending Rs 100 lakh crore on infra projects alone, something which has been termed as unrealistic by experts. But the point is not strictly about meeting these targets. It’s about scale — thinking big and setting even unrealistic goals. Even if you fall short of it, you end up achieving more than what you would otherwise have achieved in the normal course, something Modi’s critics fail to grasp about his governance mentality.

Nevertheless, my grouse with the Modi government is not over scale, which I welcome, but over style. When it is building public infrastructure at an unprecedented scale, this was a great opportunity to revive Hindu architecture which lost its way with the foreign invasions and a total absence of any patronage from the state.

Whatever remains — in the South and in parts of Rajasthan — is precisely because Hindu rajas ruled these areas for longer times and they were comparatively less impacted by violent marauders. A lot of rebuilding of Hindu holy places took place, such as those under Devi Ahilyabai Holkar, when the Marathas had managed to free vast swathes of Indian territory from Mughal rule.

After independence, the Indian state informally secularised itself under Nehru who was allergic to sponsoring anything which reminded him of our Hindu past. This was followed by formally changing India into a secular republic via a constitutional amendment during the Emergency, when the Constitution itself was under suspension, an irony of Indira Gandhi’s proportions.

It’s only under Modi that the head of Indian government has dared to wear his religion on his sleeves. But from the man who helped achieve a degree of Hinduisation of the political discourse, more was expected. I have argued that the next target for the BJP should be ‘Hinduisation of the polity’ but Modi, an incrementalist in the socio-political sphere, understands that radical changes can also cause derailment, thus doing more harm than good. He may not want to move too fast in that direction.

However, the revival of Hindu architecture through the rebuilding of some of India’s most important symbols of state is a low-hanging fruit that should’ve been plucked. It is a missed opportunity.

When the British moved the capital from Calcutta (now Kolkata) to New Delhi, they were clear in their minds that they wanted to construct an imperial vista which would represent their seat of power. Sir Edwin Lutyens, the architect chosen to construct it, was a fan of European Classicism and the perfect fit for the project. Of course, his brief was to build a design which was ‘plain classic with a touch of orientalism’ (Viceroy Lord Hardinge). The jaalis, chhatris, the high-domed portal arch, stupa-like dome of the Rashtrapati Bhavan, the Jaipur column, et al, were some of those orientalist touches that Lutyens incorporated.

Bimal Patel, the director of HCP Design, Planning and Management Pvt Ltd, which won the bid for redesigning the central vista, has emerged as one of the most consequential architects today in India. From Sabarmati Riverfront to Vishwanath Corridor to now the Central Vista, he is the go-to architect for designing Modi’s dream projects. It wouldn’t be wrong to call him Modi’s Lutyens or Le Corbusier.

In fact, as far as architecture style is concerned, Patel is more like Corbusier than Lutyens whose taste was much superior to either of them. Patel’s minimalistic modernism style looks neat and clean like Corbusier‘s but it’s soulless. Those who have been to Chandigarh would wholeheartedly agree with me. The projects designed by both Patel and Corbusier may be very convenient but there is no wow factor. Their styles are very transactional in the manner that they make sense to the mind but the heart is left cold.

The triangular parliament design in the twenty-first century is an insult to this civilisational nation which mastered the beauty of fractal geometry millennia back. It imitates the aesthetics of Lutyens, the modernism of Corbusier and attempts the same sprinkling of orientalism that Hardinge had envisioned (jaalis, domes, chatris, arches, etc). One wonders if the new structure is being constructed to develop a likeness to the circular designed Parliament and respect for Lutyens.

There is nothing Hindu about the proposed design of the new parliament (except the sprinkling mentioned above). Moreover, the offices along the Rajpath look like cheap imitations of super blocks that dot the Barcelona skyline.

The Prime Minister calls Parliament a temple of India’s democracy. If that is so, why doesn’t it look like one? Or have we internalised the ‘secular’ nature of the state so much so that this temple should have no resemblance to the Hindu temple?

It’s for this reason that despite supporting the idea of a revamped central vista, one can’t get oneself to support the resultant design wholeheartedly.

First, under Nehru, and now under Modi, a historic opportunity to revive Hindu architecture, which was truly possible with state patronage, is being missed. Had it happened, we would’ve witnessed a trickle-down effect with buildings in state capitals or district headquarters following in the footsteps, finally culminating in the building of homes and offices in traditional Indian style. Alas!