Centre Tells Parliament: Over 2.5 Crore Scholarships Given To Minority Students Since 2014 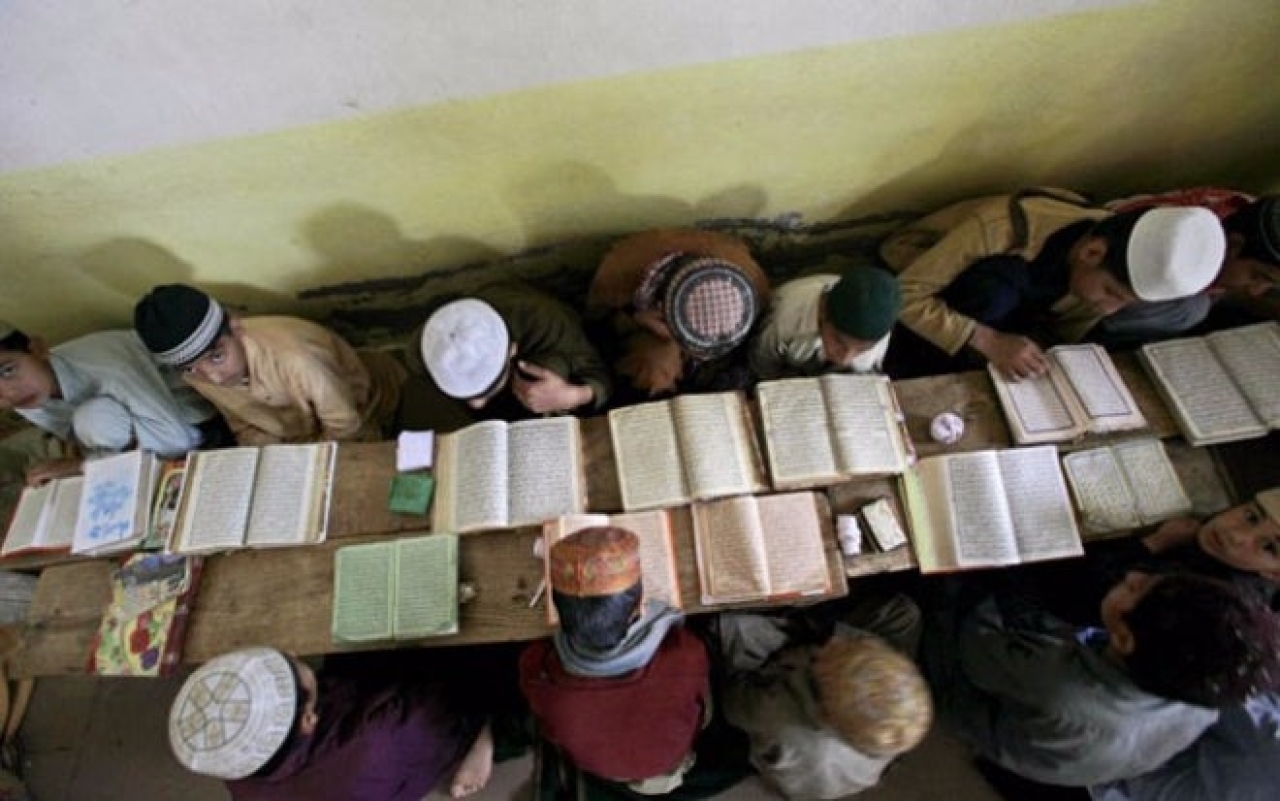 Students at a madrasa

The Bharatiya Janata Party (BJP) government at the centre has told the Parliament that it has distributed more than 2.5 crore scholarships to students belonging to six national minority communities since it assumed office in 2014. This information was relayed to the lower house on 24 July in the ongoing Monsoon session of the legislature.

National Vice-President of the BJP Vinay Sahasrabuddhe asked a question from the minority affairs ministry on data about the new and innovative schemes and programmes implemented for welfare of Minorities during 2014-18 and their success so far.

In his answer, the Union minister, Mukhtar Abbas Naqvi listed as many as 16 schemes run by his ministry for the welfare of the six minority communities - Muslims, Christians, Jains, Buddhists, Parsis and Sikhs. Most of the schemes cater to education and skill development initiatives. The data put out by the minister reveals that the government has distributed more than 2.5 crore scholarships in the last four years.

Of all the schemes, achievements under eight schemes particularly stand out because of the staggering number of beneficiaries as shown in the table below. 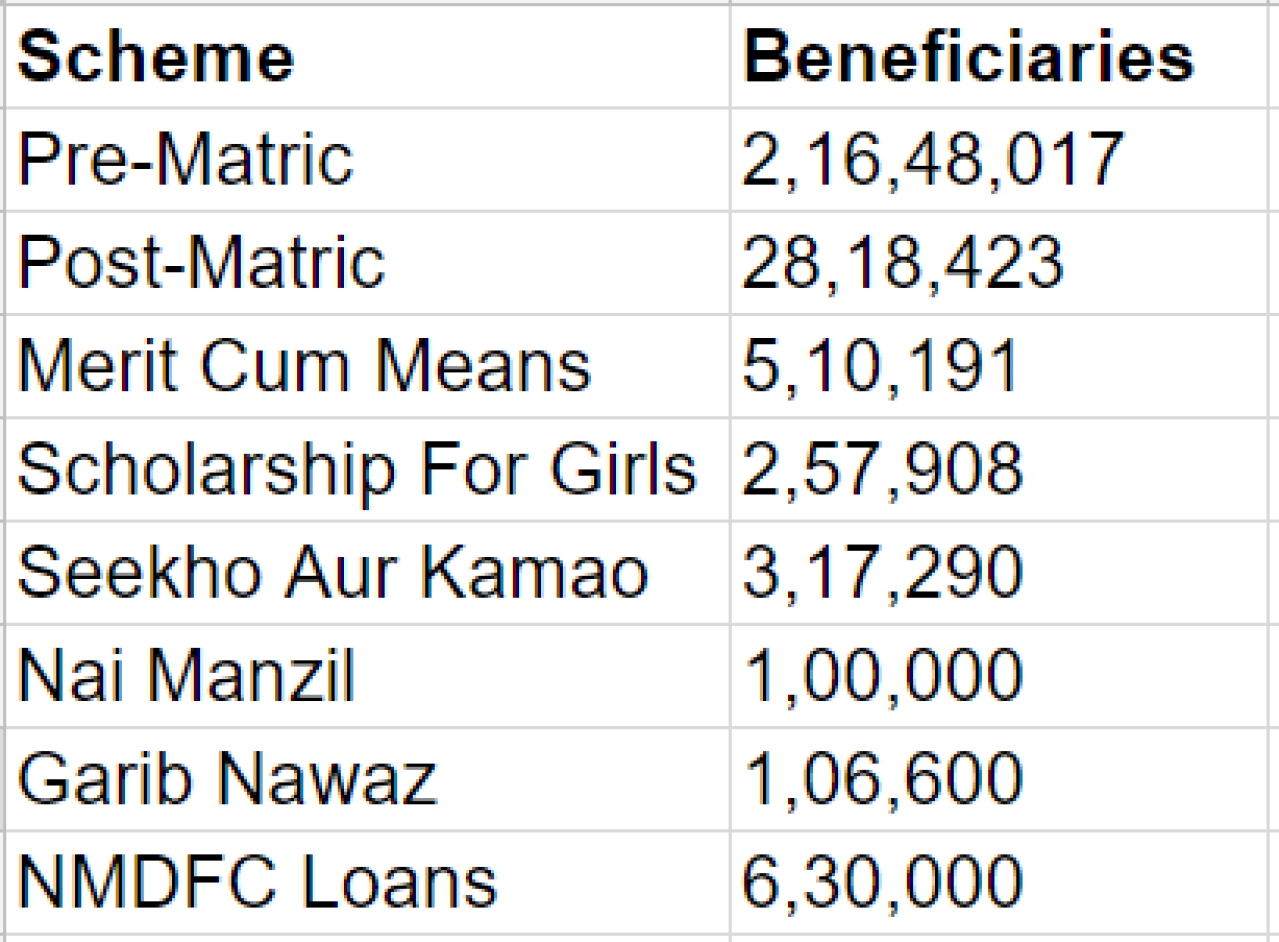 Pre-matric scholarship is given to students from six national minorities studying in classes 1 to 10 with annual family income less than Rs 1 lakh.

Post-matric scholarship scheme is given to minority students studying in class 11 and above, including in bachelor’s degree courses such as BSc, BCom, and BTech. The annual income criteria for availing the scholarship is set at Rs 2 lakh.

Merit-Cum-Means scholarship is for minority students who are enrolled in technical and professional courses at graduation and post-graduation levels and the income of whose families don’t exceed Rs 2.5 lakh per annum.

Under Nai Manzil, MoMA in partnership with World Bank provides education bridge programmes to school dropout minority youth from families below the poverty line. It helps them obtain open schooling certification of class 8 or 10 and also impart high-quality skill training, including soft skills to enhance their employment capabilities.

Seekho aur Kamao is a skill development programme for minorities. MoMA implements this scheme through various agencies at the state and local levels. It has two main components – imparting skill for modern trade and in traditional trades, arts, and crafts. The objective is to bring down unemployment rates among minorities and “to generate means of better livelihood for marginalized minorities”.

As one can see, beneficiaries under Pre-matric scholarships account for majority of the total recipients. While the first four schemes listed in the above table are for scholarships, the next three are related to skill development of minorities.

On scholarships, one thing that needs to be noted is that if an eligible student has got scholarship for the first time in 2014 and got it renewed for the next three years then it will be shown as a new scholarship award. Hence, the total scholarships awarded do not necessarily mean they have been awarded to that many students.

Nonetheless, these schemes have benefited millions of students from minority communities. They assume more important given the fact that these are not available to non-minority students.

Naqvi also informed the lower house of numerous steps the government has taken to popularise these schemes. “The Government has undertaken multi-media campaign to spread awareness of welfare schemes meant for minorities through print and electronic media, namely, Doordarshan Network, All India Radio Network including FM Channels, private FM channels, private TV channels and websites all over the country, including rural and far flung areas. Pocket booklets and pamphlets on various schemes/programmes of the Ministry are published in Hindi, English, Urdu and other regional languages,” he said.

Though, the BJP government may want to claim it as an achievement under its commitment of “Sabka Saath, Sabka Vikas”, there should be no place for such sectarian schemes in India. Scholarships should ideally be awarded on basis of merit without checking the religion of the beneficiary. Skill development initiatives launched by the government shouldn’t differentiate between the citizens on the basis of which god they pray to.

Get Swarajya in your inbox everyday. Subscribe here.
Tags:
133 Shares