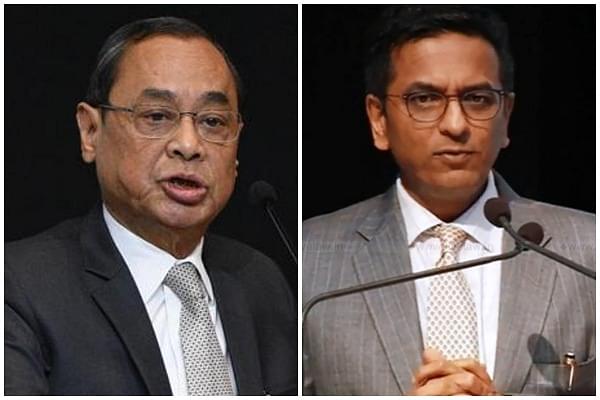 The intervention by Justice D Y Chandrachud in the probe by a three-judge panel set up to investigate complaints of sexual harassment levelled by a woman against Chief Justice of India Ranjan Gogoi shows how divided a house the current Supreme Court is.

Reports today (6 May) suggest that Justice Chandrachud, who will become Chief Justice himself in 2022, has written to the panel, headed by the next Chief Justice, S A Bobde, that it should not proceed ex-parte following the withdrawal of the complainant from the proceedings. Among other things, the Bobde panel, which includes Justices Indira Banerjee and Indu Malhotra, declined to video-record the proceedings or allow the complainant to have her lawyer Vrindra Grover present while being questioned.

The problem is not with Justice Chandrachud’s views, but the attempt to create a controversy by leaking the letter written to Justice Bobde and embarrassing the court. That the Supreme Court has no real mechanism to deal with such cases, leave alone allegations of other kinds of judicial misconduct, is obvious, but should a sitting judge be virtue-signalling his disagreements with the Bobde panel by leaking the letter either directly or indirectly?

Getting aggressive lawyers like Grover to be part of the proceedings means the details of the Bodbe panel’s hearings face the risk of more leaks, regardless of whether the Chief Justice is guilty of any misconduct or not. Justice Chandrachud’s leaked letter makes it near impossible for the Bobde panel to have much credibility unless the outcome is against the CJI. This is no way to ensure fairness and justice. This also means that Justice Bobde will start his career as CJI later this year with this cloud over his head.

It is extremely worrisome that many of the court’s internal battles are now being fought in the harsh glare of media publicity. Consider the following events since 2017.

In early 2017, a suicide note penned by former Arunachal Pradesh Chief Minister Kalikho Pul, was widely in circulation, embarrassing the highest court. Among other things, the note talked about the bribes being paid or sought by various judges, including the then Chief Justice J S Khehar.

In January 2018, four judges of the Supreme Court, including the current Chief Justice Ranjan Gogoi, addressed a press conference claiming that the then CJI, Dipak Misra, was setting up benches arbitrarily. Among other things, they seemed to want a probe into the death of Judge B H Loya, who was hearing a case against Amit Shah. The Chief Justice had taken the case away from Justice J Chelameswar’s court, and assigned it to another bench. But after the new CJI Gogoi took over, no significant change has been made in how cases are allotted. It is the CJI who remains master of the roster. The presser made no difference to how the court conducts itself. So was the presser just much ado about nothing?

In April last year, a bench headed by CJI Misra, but with the judgement written by Justice Chandrachud, rubbished the demand for a probe into Judge Loya’s death. The demand for the probe was clearly political since it involved Amit Shah’s case, but as soon as the Loya judgment came, the Congress party moved a motion of impeachment against the CJI – which failed as the Chairman of the Rajya Sabha, Venkaiah Naidu, rejected the motion of impeachment as wanting in substance. The impeachment case had political intent written all over it.

In an interview after retiring last June, Justice Chelameswar confessed that judges can be politically influenced, and talked darkly about Rs 1 crore lawyers.

Last November, when the current CJI took over, he immediately postponed hearings in the Ram temple title dispute, even though the previous CJI had promised speedy hearings. And the new bench, which includes Justice Bobde, has sent the case for a potential out-of-court resolution. If no deal is announced, the case will resume in the Supreme Court, nine years after an appeal was first made against an Allahabad High Court judgement of 2010. It seems obvious that the court did not want to start hearings when a high-decibel election process was on.

Last month, when a former employee made allegations of sexual harassment against CJI Ranjan Gogoi, he alleged a conspiracy to defang the judiciary. The Bobde panel has taken note of his allegation and directed a probe into this possibility. Is it any job of the court to direct investigations without reference to the executive?

Last week, another petition, by Harsh Mander, asked the CJI to recuse himself from a case involving the treatment of illegal immigrants in Assam and their detention. He was removed as petitioner for questioning the CJI’s integrity in dealing with this sensitive issue.

And now we have a sitting judge, and future CJI, making his views on how the sexual harassment case against the CJI should be handled by a judge who will succeed Ranjan Gogoi as CJI.

Do these instances indicate a higher judiciary that is confident in its own credibility and fearlessly administering justice to one and all?

You be the judge.