Clear Change In Track: What Drives Mayawati’s Outreach To Muslims? 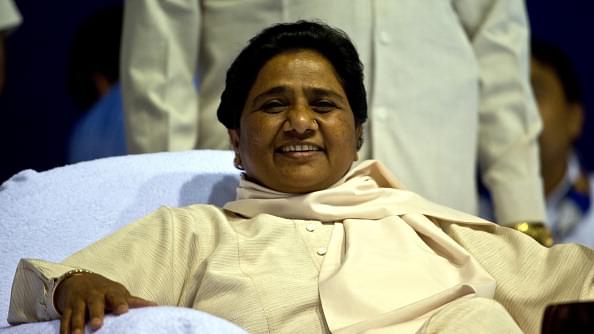 Mayawati has made a qualitative change in her social engineering for the upcoming 2017 assembly polls in Uttar Pradesh (UP). Her Dalit-Brahmin social coalition of 2007 fame is being replaced by a Dalit-Muslim coalition. Apparently, her love for Dalit-Muslim coalition gives a new trajectory to the subaltern movement and is reminiscent of Kanshi Ram’s Backward (SC, ST, OBC) and Minority Communities Employees Federation (BAMCEF) and Dalit Shoshit Samaj Sangharsh Samiti (DS-4) movements.

In a recent Centre for the Study of Developing Societies (CSDS) survey called UP Tracker-I, conducted at the end of July and first week of August this year, 62 per cent of the Muslims were found supportive of Samajwadi Party (SP) while only 18 per cent backed Bahujan Samaj Party (BSP). That puts a question mark against Mayawati’s new social engineering initiative.

Has something gone wrong with her Dalit-Brahmin coalition?

Mayawati had a strong Muslim contingent earlier too; she gave tickets to 61 Muslims in 2007 and 85 Muslims in 2012, but this time her reported ticket allocation to Muslims has gone well beyond 120 seats. That is almost double the 2007 figure. But, at whose cost is Mayawati giving tickets to Muslims so liberally? The Dalits have to be given tickets for the 85 reserved assembly constituencies and Mayawati does not entertain the idea of having more Dalits from general seats. So, the greater allocation to Muslims could be only at the expense of Brahmin/upper caste tickets.

Mayawati faced difficulties in running her social engineering in previous term as chief minister. Both Dalits and Brahmins were dissatisfied. Dalits were unhappy because greater accommodation to Brahmins was being shown at their expense; they were also losing positions to Brahmins and Muslims in leadership structure. Brahmins, on the other, were demanding more while many intermediary castes wanted their share in both governance and organisation.

BJP leader Dayashankar’s diatribe against Mayawati and BSP’s response to that in Lucknow put the Dalit-Brahmin coalition on the ventilator. BJP quickly expelled Dayashankar to ensure that the party is not seen as anti-Dalit, and Prime Minister Narendra Modi reached out to Dalits when he said at Hyderabad that “if you have to attack, attack me; not my Dalit brethrens”. Mayawati, on the other hand, hurriedly backtracked on her offensive in a bid to signal that she was not on the war path against upper castes.

But the damage had been done; not only Thakur, but Brahmin supportr too dwindled for Mayawati. That was the defining moment that accelerated her decision to go for a Dalit-Muslim alliance in a big way.

Dalit participation in the electoral process in UP had been low. According to the Election Commission, only 44 per cent of the Dalits had voted in the 2007 Assembly elections, when Mayawati swept to victory. Where are the remaining 56 per cent Dalits? Who are they; to which sub-caste do they belong? Why do they not vote? If Mayawati can be a champion of the Dalits with just 44 per cent of them being in the political mainstream, it could be a game changer if some party were to access the leftover 56 per cent Dalits. Moreover, even those Dalits who had consistently voted for Mayawati, may not be fascinated by her identity based exclusionary politics, today, and may be open to other parties pursuing developmental agenda. Does Mayawati not know that BJP is reaching out to Dalits who are not integrated into the political mainstream?

Another reason for Mayawati to go all out for the Muslims is the fact that she was not confident of her core constituency, the Dalits. Dalit support for BSP had been declining since 2012 as per CSDS data; in 2012, she lost 23 per cent Jatav (Chamar) votes as compared to 2007 assembly polls. That loss was spread across all sub-regions of UP though her maximum losses were in Poorvanchal (-33 per cent) and Bundelkhand (-31 per cent). Even in 2014, she lost 16 per cent Jatav and 35 per cent non-jatav votes vis-à-vis 2009 LS polls. However, as per the CSDS Tracker-I, she seems to be retrieving her Dalit voters recently.

Since the days of Ram janambhoomi movement-Babri Masjid demolition, Muslims had been consistently voting SP in a big way. The recent CSDS Tracker-I data confirms the continuation of that trend (Table-1).

Why does Mayawati thinks Muslims will desert SP and move to BSP?

Muslim community had been going through the process of social and economic transformation which has sharpened cleavages along caste and class lines. The azlaf (OBC converts) and arzal (Dalit converts) Muslims resent discrimination at the hands of ashraf Muslims. The pasmanda Muslims (OBC and Dalit) are taking a different trajectory; their socio-economic conditions are similar to that of the Dalits and the most-backwards. Muslim khatiks had even petitioned the Supreme Court for the grant of schedule caste (SC) status and, consequently, reservation benefits.

Mayawati would also like to exploit the family feud in SP to attract Muslims. Developments in SP indicate a possible split in the party. While that may enable Akhilesh to play an autonomous political role to absolve the party of its criminal, corrupt and crony-socialist tag, it may also send signals among Muslims that the weakened party has little chance to come back to power. In that case, Mayawati can facilitate their shift to BSP. She is especially targeting youth among Muslims. For that, she has appointed Afzal Siddiqui, son of senior BSP leader Nasemuddin Siddique in charge of Muslim bhaichara committee in western-UP where Muslim population is higher. However, not much has been heard about Brahmin bhaichara committees.

In 24 districts of UP, Muslim population is above 19 per cent, their state average. That means that Muslims are in a position to influence electoral outcome in about 125 constituencies through tactical voting. That could become significant in coalition with Dalits as they tend to vote en bloc. However, that would warrant two things; one, consolidation of Muslims in favour of BSP that may be difficult as other parties may also contend for their votes; two, to take advantage of possible Muslim consolidation and tactical voting, BSP will have to position itself as strong contender for power in those constituencies where Muslims are in good numbers.

But, promoting Muslims at the expense of Brahmins may sharpen factional rivalry between BSP stalwarts, Nasemuddin Siddiqui and Satish Mishra. That will surely harm BSP’s electoral prospects in several constituencies, especially in east-UP (where Brahmins are in good number) and Bundelkhand (where Muslims are in small number). Also, Mayawati expelling senior leader Swami Prasad Maurya indicates her contempt for most-backward-castes; she almost replicated the mistake that she committed before 2012 assembly polls when she had expelled Babu Singh Kushwaha and lost substantial chunk of most-backward votes with huge electoral losses. If Mayawati could, inadvertently, fragment Muslim votes and push most-backwards towards BJP, one could surely anticipate the net outcome of Mayawati’s new social engineering showcasing Dalit-Muslim coalition.