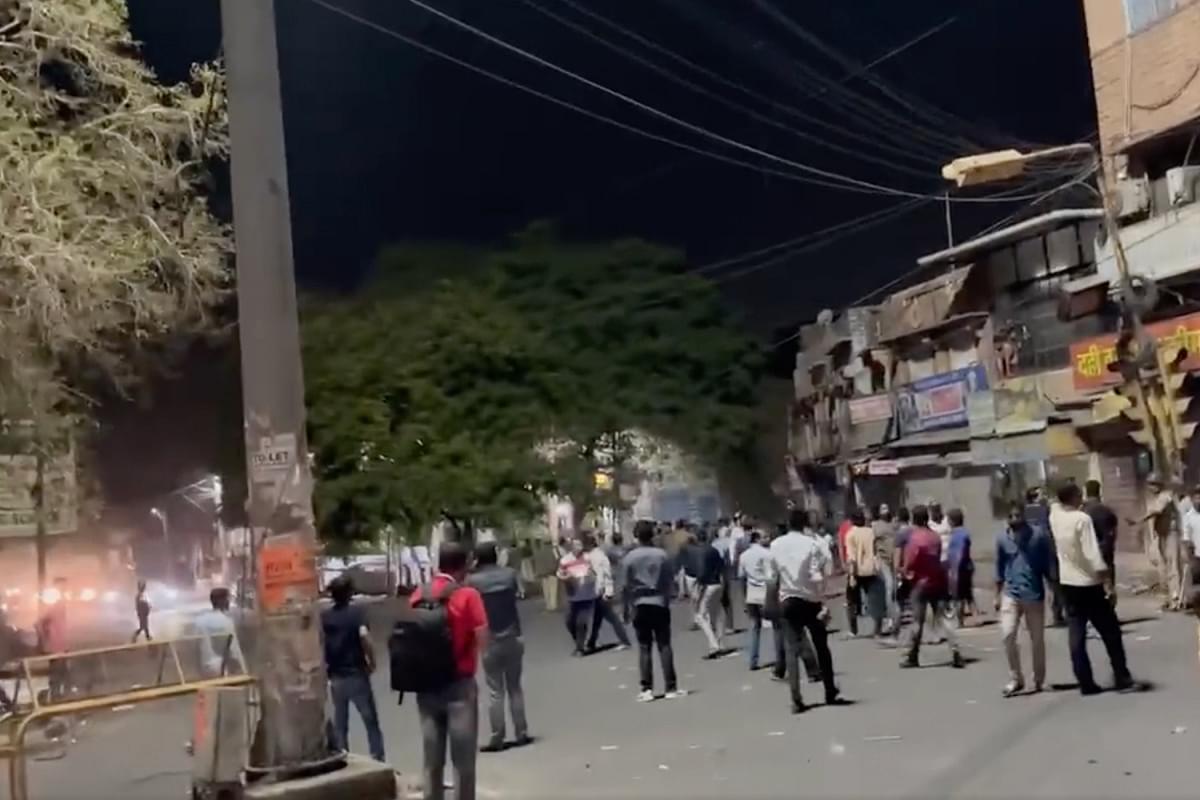 Rajasthan Minister of State for Home Rajendra Yadav said over 50 people have been arrested in connection with the incident so far.

Several others were also detained in the night.

The chief minister has appealed to people to maintain peace and harmony. He also accused the BJP's central leadership of trying to defame the state government.

The Jodhpur deputy commissioner of police issued orders imposing a curfew till May 4 midnight besides suspending mobile internet services. Tensions broke out past Monday midnight over putting up of Islamic flags on the Jalori gate circle, which led to stone pelting in which five policemen were injured.

The situation was brought under control in the early hours on Tuesday with heavy deployment of police but tensions escalated again in the morning after prayers at an Eidgah.

Shops, vehicles and houses were pelted with stones near the Jalori gate area.

Members of a minority community were installing Eid flags and they put up a flag on a roundabout alongside the statue of freedom fighter Balmukund Bissa.

This led to a confrontation as members of the other community alleged that a saffron flag, which they had put up there ahead of Parshuram Jayanti, had gone missing.

The issue snowballed into stone pelting and clashes, officials said.

Police rushed to the spot to control the situation during which five policemen were injured, the police control room said.

Police had to lob tear gas shells to disperse the mob.

Mobile internet services were suspended in the area to check the spread of rumours, the officials said.

Gehlot in a tweet urged people to maintain peace and called the incident unfortunate.

'While respecting the tradition of love and brotherhood of Jodhpur, Marwar, I make a touching appeal to all parties to maintain peace and cooperate in restoring law and order,' he said.

The chief minister said leaders of all political parties should ask their workers to maintain peace and they all should remain united.

Gehlot also chaired a high-level meeting at the Chief Minister's office to review the situation. He asked ministers Rajendra Yadav and Subhash Garg, and two officers to go to Jodhpur by helicopter.

The CM directed officials to take stern action against those responsible for it.

A criminal, irrespective of his religion, caste or class, must not be spared, the CM told officials.

Later, he told news channels that the it was the agenda of the BJP to defame him.

'It is their job to incite Hindu-Muslim riots. How long can you do politics in the name of polarization? This country belongs to all religions, all castes and PM Modi and central government also have to understand this,” he said.

On the other hand, the BJP targeted the state government over law and order.

Shekhawat threatened that he, along with other party leaders, will sit on a dharna at the Jalori gate circle if the rioters are not arrested.

'One man was stabbed and is struggling for life in hospital. The miscreants also insulted women and broke the leg of a minor girl. They also tried to damage a temple in the Sunaro Ka Baas area,' he alleged.

BJP MLA Suryakanta Vyas in Jodhpur objected to the installation of an Eid flag alongside the freedom fighter's statue.

She had gone to the spot last night as soon as the incident occurred.

'They did (put up the flag) at (the statue of) Bissa ji and we have a strong objection to this. We will not forget this,' Vyas said.

BJP state president Satish Poonia said, 'Putting up an Islamic flag on the statue of freedom fighter Balmukund Bissa by anti-social elements and removing saffron flags put up on Parshuram Jayanti is condemnable.'

He appealed to people to maintain peace and demanded that the state government establish the 'rule of law'.

'A saffron flag was replaced with an Islamic flag at the statue of Bissaji last night and sabotage happened today. It is proven from the incident of Karauli that such incidents are happening under the patronage of the state government,' Poonia said in a video statement.

He said such incidents against the majority community are alarming.

In the evening, ministers Rajendra Yadav and Subhash Garg along with the ACS (Home) and the ADG (Law and Order) visited the violence-hit area and a hospital.

Yadav told reporters at a press conference that more than 50 people have been arrested and efforts are being made to identify others.

He said three people are getting treatment at hospitals while 12-15 others were discharged after primary treatment.

Yadav said officials have been sent to the curfew-affected areas to ensure that people face no troubles.

'We will hold a meeting with officials to discuss every aspect of the incident. If any officer has not shared the correct information with the government, then the officer will be removed,' he said.

Some of the local journalists who also received minor injuries in stone pelting and lathicharge also shared their plight.

Yadav said every aspect of the incident will be examined and no culprit will be spared. The ministers and senior officers will stay in Jodhpur for two day.