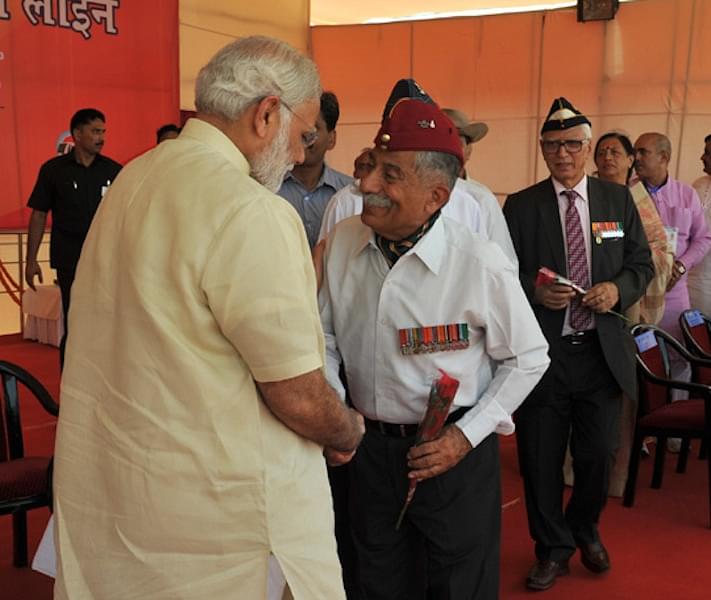 The current lopsided OROP announcement has resulted in the BJP losing goodwill amongst military veterans.

Speaking at Faridabad on September 6, Prime Minister Narendra Modi announced that those taking voluntary retirement also will be eligible to OROP. One wonders if he realized that after 15-months of inter-ministerial deliberations, insertion of the VRS clause was anything but bureaucratic mischief. Especially, since VRS does not exist in the military. Had VRS existed, perhaps half the military would have gone for it considering the political and bureaucratic apathy that the military has been subjected to over past several decades by all governments. Just the number of personnel from Special Forces who took pre-mature retirement in the last 10-15 years because of such apathy would shock the public. That the number would have been much more but for the cap on how many can leave is a separate issue.

While announcing OROP, the Defence Minister, reading from a prepared script though flanked by the Service Chiefs, apparently had little idea about the implications of announcing that personnel taking voluntary retirement would not be eligible to OROP – indeed a sad state of affairs. His body language anyway indicated he had been stumped by the financial pundits.

In military, pre-mature retirement can be sought without completing minimum pensionable service or after completing minimum pensionable service. Personnel in the latter category draw pensions and should be entitled to OROP. By just mentioning “early retirement” those drawing pension were being denied OROP, which was not justifiable. Though Prime Minister Modi has clarified OROP will be applicable to all those drawing pension, it is yet to be seen what will be mentioned in the government’s implementation letter, especially since this would likely be issued ‘after’ the Bihar elections.

Obviously, the bureaucratic advice that the Prime Minister and Defence Minister receive is wrought with anti-military machinations, otherwise such a clause—VRS in OROP—could not have been inserted in the first place. The Modi government became the laughing stock of the world due to the brutal police action on legally and peacefully protesting veterans at Jantar Mantar on August 14 – an action ill advised. The folly was compounded when no apology was rendered by any political authority. Sending a scapegoat police officer to apologize was a laughable action. There came not a word of remorse from the President (Supreme Commander of Armed Forces) during his Independence Day Eve address to the nation, neither by the PM and the RM on their Independence Day addresses,  or not even a tweet from the Prime Minister known for his humility.

Was it bureaucratic advice to keep the military under the thumb ‘any which way’? With Indo-Japanese relations on a high, the least our hierarchy can learn from the Japanese is humility. The fact remains that the blot of unprecedented police action against the veterans will stick with this government for a very long time.

But getting back to OROP, the veterans have simply been demanding OROP as defined by the 2011 Koshyari Parliamentary Committee and the grant of OROP w.e.f 01 Apr 2014, as committed by the UPA government in Parliament on 17 Feb 2014 and by the present NDA government.

The Defence Minister in his press briefing announced: cost of OROP would be Rs. 8,000-10,000 crore, increasing in future (recently MoD and Defence Accounts had stated cost of OROP as Rs 8,293 crores); benefit will be w.e.f 1st July 2014; arrears will be paid in four half-yearly installments, single installment for widows; 2013 will be taken as base year; pension will be re-fixed for all retiring in same rank with the same length of service as average of minimum and maximum pension in 2013, those drawing pensions above the average will be protected; personnel who voluntarily retire will not get OROP; pension would be re-fixed every 5-years; a one-man judicial committee to examine interests of retirees of different periods and different ranks and inter-service issues to submit report in six months; and that the PM’s commitment to OROP is fulfilled and MoD will soon issue implementation orders.

All those trumpeting that the promise stands fulfilled have obviously not read the Koshyari Committee Report. For had they read it, they would have realized what the military had prior to the 3rd Central Pay Commission (CPC) in 1973. The Committee’s recommendation to restore the pre-1973 status was accepted by both UPA and NDA governments.

The pre-1973 status meant that: OROP was applied to military with annual equalization of all military pensions which was not connected to any pay commission, and; in addition, benefits given to other government servants as part of pay commissions were also applied to the military. The 3rd CPC arbitrarily stopped OROP and annual equalization of pensions for the military, reduced military pensions from 70% of pay to 30%, enhanced pensions of other government employees and continued with annual equalization of 100% pension for organizations like the Railways (whose manpower strength is as large as the Indian Army), bureaucracy, judiciary, parliamentarians and civilian defence employees. Isn’t it shocking that 45% of defence pensions outlay is being consumed by 22% of civilian employees of MoD sitting in cushy offices. Can Finance Minister Arun Jaitley justify such protracted injustice to the military veterans?

The 5-year equalization of pay defeats the very definition of OROP as every 5-year window would find earlier retirees getting lesser pension from their junior counterparts retiring later. The Modi government had promised to implement the Koshyari Report which included automatic actualization of military pensions. This promise stands broken with the clause of revising pensions every 5-years. The public is being misled by the Finance Ministry saying that “huge sum” will be required to equalize military pensions annually, ‘without’ naming what that sum is. The fact is that annual equalization for four years adds to only about Rs 165.86 crores taking the present OROP cost of Rs 8,293 crores, latter worked out by MoD and Defence Accounts..

There hardly is a problem of money: MoD  surrendered Rs 6000 crores on 31st March as also Rs 1000 crores earmarked for the National War Memorial; between 2007-2013, bad debts of government banks amounting to Rs five lakh crore were written off and the RBI revealed that 95% of these were large loans to “big companies”, and; similar bad debts of sick PSUs including Air India were written off, some even inflated for understandable reasons. The latter two apparently are standard procedure by all governments to create slush funds that strictly is black money. Isn’t this deliberate “bureaucratic apathy” which the Koshyari Committee wanted stamped-out, and the government promised to do so as well?

Grant of benefits from 1st July 2014 instead of 1st April 2014 demanded by the veterans (commencement of FY 2014-15) is again a typical case of bureaucratic obduracy. Appointment of the One-Member Judicial Committee with a mandate to submit a report in six months appears an effort to take the veterans up the gum tree and dissipate their protests at Jantar Mantar. Why have these issues not been examined by the MoD, DESW, Finance Ministry over past several months? Is the intention to brief him what his recommendations should be? Why does this Committee not consist of a panel (as recommended by veterans) and why it should not have veteran representation unless this is deliberate like lack of service representation in the MoD and DESW.

The Defence Minister says government respects armed forces and looks after their welfare but how is it that the 7th CPC has no representation from the military despite such demands from past several years? How is it that IAS, IPS and the Central Services also have Assured Career Progression (ACP) but the military is denied this? The Koshyari Committee described in detail why Armed Forces cannot be equated with any other government service. The government accepted it but permitted underhand bureaucratic machinations. Till recently a DIG was between a Lt Col and a Col. Now a Col has been equated with Non-Functional Selection Grade (NFSG). The rank of a DIG is now officially equal to a Brigadier. Both are now on a Grade Pay of Rs 8900, because of the machinations of the Governmentt and the Central Services to run down the Military.

The bottom-line is that the promise of OROP which needed explicit measures to restore the pre-1973 status of military pensions has been thoroughly bungled by the bureaucracy and ostensibly by forces that want to discredit Prime Minister Modi, finances not being a problem as explained above. 5-year equalization of military pensions can no way be termed OROP as persons retiring in the 5-year window will start getting lesser pension than their juniors retiring later. By saying that the next revision will be after five years (in 2019) the bureaucracy has delivered a double blow to the military veterans, which is not being realized. With the 7th CPC delivering its recommendations before 2019, the obvious implications are that benefits given to other government employees as recommended by the 7th CPC will not be passed on to military veterans. It is reiterated that the pre-1973 OROP status included annual equalization of all military pensions (not connected to any pay commission) and benefits given to other government servants as part of pay commissions also applied to the military pensions.

It goes without saying that with the current lopsided OROP announcement, the BJP has lost plenty goodwill of military veterans. A half promise kept is no promise. It would be in fitness of things to agree to annual equalization of pensions as promised and appoint a military member in the 7th CPC to ensure the military veterans not lose out, in line with the pre-1973 status. It would also be in the fitness of things for a political figure to meet and address the veterans at Jantar Mantar and express remorse for the police action on August 14. Much that it may perhaps hurt the false ego of the said politician, all these actions will win back veteran support comprehensively.

What the government also needs to acknowledge is that over and above the issue of OROP is the crying need to reorganize the higher defence structures including the MoD without which the defence of India will remain in dire straits. The MoD needs to be replaced with a Department of Defence (DoD) headed by the Defence Minister and manned by military professionals. If Prime Minister Narendra Modi could replace the Planning Commission with the Niti Ayog there is no reason he cannot do so for defence – no matter how much the resistance. The entire serving and military veteran community will vote for him if their respect and dues are restored.