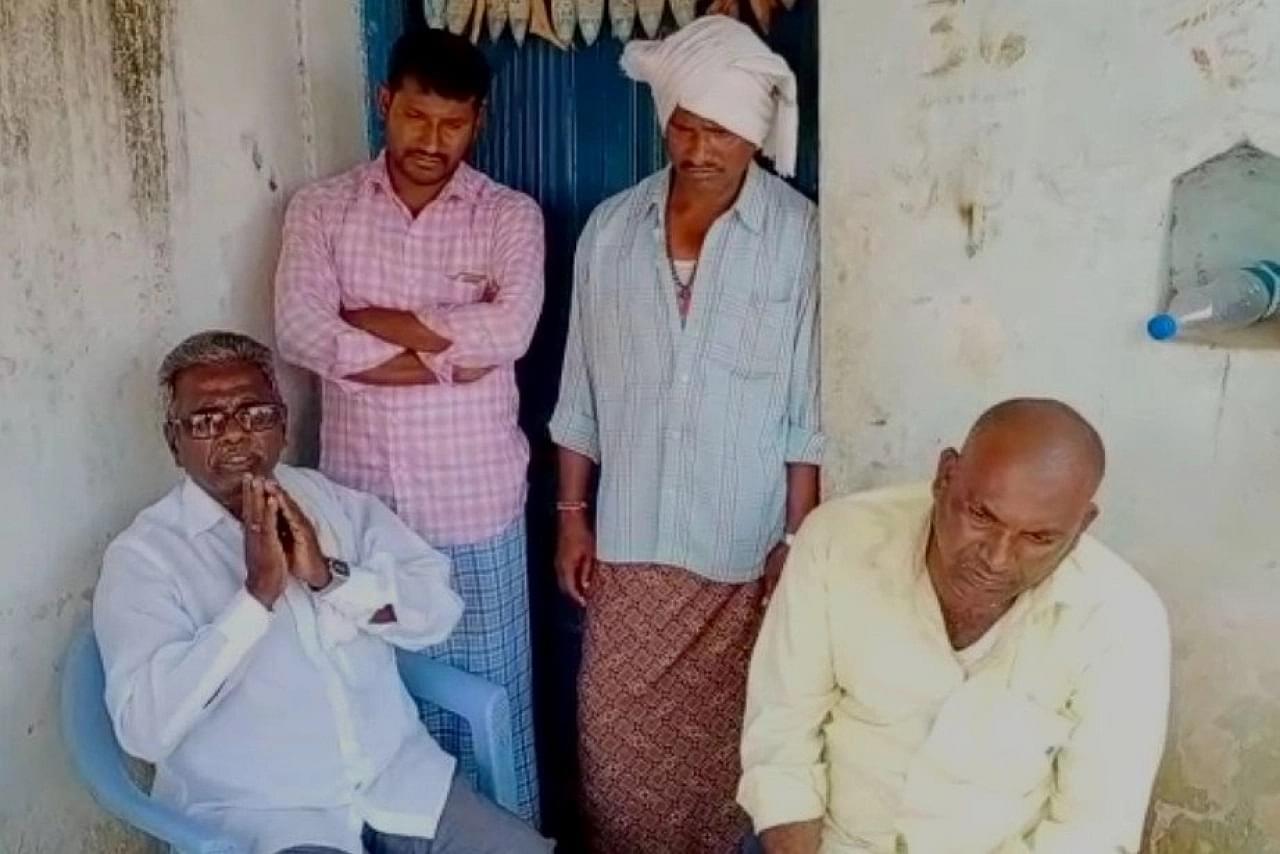 The person on extreme right is Teku Gopi, husband of the victim. The person on the chair is village sarpanch Gangaram. Picture clicked on 3 December/Swarajya

Three days before the horrific brutality meted out to a 26-year-old veterinary doctor, Priyanka Reddy, came to light, a Dalit woman was found similarly raped and murdered in the same state of Telangana.

Teku Lakshmi was around 30, and mother of two sons.

On the morning of 25 November, her husband Gopi discovered her half-naked, badly injured body in a secluded spot between Ramnayaktanda and Ellapatar villages, in Lingapur mandal of Komaram Bheem-Asifabad district (earlier Adilabad). The area is close to 400 kilometres from Hyderabad.

She had been missing since afternoon of the previous day. The Lingayat police arrested three men – Shaik Babu (35), Shaik Shaboddin (30) and Shaik Makdum (40) – for her gangrape and murder (FIR number 49/2019). Charges under SC/ST Prevention of Atrocities Act were also invoked.

In a verdict delivered in just two months, a fast-track district court has awarded death sentence to all the three accused. The judgement came on 30 January. A fine of Rs 26,000 each has been imposed on the accused.

The court called it the ‘rarest of rare’ crime.

The Times of India has reported that the trio has also been awarded three years of rigorous imprisonment for dishonest misappropriation of property possessed by deceased person at the time of his or her death. The accused had stolen the woman's phone and cash after the crime.

As per reports, the judgement was delayed by a few weeks as the accused had pleaded mercy from the court, saying they had young children dependent on them.

The News Minute quoted Sathyanarayana, Deputy Superintendent of Police (DSP) of Asifabad as saying that 25 witnesses were produced before the court. SP Malla Reddy told reporters that the police filed the chargesheet in 20 days.

Gopi told this correspondent that he is satisfied with the judgement. “We had been demanding death for the culprits so we are satisfied,” he says.

After Lakshmi’s death, Gopi shifted to his native village, Gosampally, in Khanapur mandal of Nirmal district. The area is around 250 km from Hyderabad city.

When Swarajya visited Gopi in the first week of December, his neighbours said that a day after the crime, Gopi poured kerosene on himself and tried to set himself on fire, but they managed to stop him.

After Reddy’s gangrape-murder – which happened three days after Lakshmi’s – created a national outrage, members of several Dalit communities staged protests, and accused the media and the government of discrimination based on caste and social status.

Among other regional publications, Deccan Chronicle reported on 2 December that Lakshmi’s family regretted that civil society’s outrage did not extend to her case.

“This was nothing but social discrimination against Dalits passing through turmoil,” Deccan Chronicle quoted Gopi as saying.

The same day, the New Delhi-based National Commission for Scheduled Castes (NCSC) took suo moto cognisance of the report and sanctioned a relief of Rs 8.25 lakh for Lakshmi’s family.

In the next few days, the district administration helped Gopi open bank accounts in his as well as his minor children’s names in order to transfer the relief amount.

Several Dalit organisations, however, continued to hold demonstrations alleging caste bias in the society and by the state government. Among others, Madiga Reservation Porata Samiti (MRPS) led by Manda Krishna Madiga staged a dharna on 4 December.

The Telangana government offered Gopi a job as an attendant at a state-run social welfare hostel.

However, Gopi has a complaint against Dalit outfits. Gopi told this correspondent that some outfits and activists made him use a substantial part of the compensation from SC commission for organising protests. Gopi estimates the sum to be close to Rs 2 lakh.

“They [Dalit organisations] used my case for furthering their politics, but did not help me financially. Instead, they took money from me for organising protests. I was made to pay for protesters’ travel and food,” he says, refusing to take any names.

Gopi says that while he is thankful for the job, it doesn’t cover his expenses. He says he gets around Rs 13,000 a month. Gopi quit school after Class IX.

He says that Rs 2 lakh each were put in the accounts of his sons, which he cannot use until they become major. The sons study in Class VI and VII respectively. He says he incurred significant expenses in his wife’s funeral, which has left him with little money.

Gopi says he appeals to the state government to give him some monetary relief.

Lakshmi, like Gopi, worked as a street hawker selling balloons and low-priced fashion accessories for women.

The couple belongs to Budaga Jangam, a scheduled caste, which is considered one of the most marginalised and poor caste groups in Telangana.

As per Gopi’s statement in the FIR that was registered after the body was found, he and Lakshmi left home together around 6 am on 24 November with their individual supplies, as usual.

He dropped Lakshmi in Ellapatar and himself went to Modiguda. When he returned to Ellapatar to pick her up around 2 pm as usual, he did not find her. Her mobile number was switched off. He searched all around but could not find her. The same night, he filed a complaint to the police.

The next morning, he and a few villagers went around looking for Lakshmi. He eventually found her body around 9 am. Her sari was pulled up above knees, the upper body was unclothed and she had severe injury marks on her head, throat and hands, the statement says.

The accused belong to Ellapatar village. The police told the media that the three men accosted Lakshmi when she was walking alone to another village.