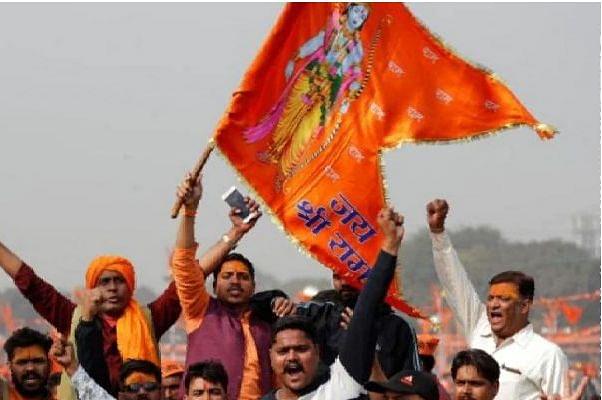 The latest attempt by the mullah-Marxist-media network to defame and denigrate the harmless, age-old, countryside greeting of ‘Jai Shri Ram’ has disaster written all over it.

The M4 (add missionaries to the mix as well) gang’s penchant for constantly needling the country’s silent majority in order to achieve their political and ideological goals is known all too well. When in power, they become a well-oiled part of the state machinery to further their agenda. And when down and out electorally, the establishment they created while being in power comes to the rescue and serves their nefarious designs.

In the National Democratic Alliance’s (NDA’s) first term, it all started with the M4 gang raising a hue and cry over so-called church attacks followed by weaving of the fake ‘rising intolerance’ narrative which in turn was followed by award wapsi. When none of this worked, they got down to sketch the lynchistan portrait based on a handful of stray incidents of thrashing of cattle thieves in a country of more than 130 crore people. The latter was (and still is) a sinister endeavour to separate Hindus from the cow, or of their sacred entities. Another aim of this move was to bury the real issue of cattle smuggling and their illegal slaughter carried out by members of the country’s largest minority.

Those who thought that this gang would mellow down after Bharatiya Janata Party (BJP) returned with an even bigger mandate than last time have got a rude awakening. The ‘saffronistas’ had hardly got the time to digest ladoos of celebration that the media started bombarding audiences with “Muslim beaten up, forced to say Jai Shri Ram” headlines. The sudden rise in such incidents was too convenient to be true. A Muslim youth in Telangana’s Karimnagar claimed he was beaten up by Rashtriya Swayamsevak Sangh (RSS) and BJP workers for not chanting Jai Shri Ram. It turned out to be fake. Similarly, such fake claims in Unnao, Cooch Bihar, Kanpur, Baghpat, Chandauli, (two in) Aurangabad have been busted so far.

Rather than retreating, the M4 complex is doubling down. If last time, cow was the chief target, for this term, they have trained their guns on Shri Ram. Of course, it goes without saying that the results of their shenanigans won’t be any different either.

First, the most obvious and immediate impact will be on politics. It will lead to further polarisation in society along religious lines. It is now an understood reality of India’s present electoral scenario that polarisation along religious lines helps the BJP and along caste lines aids the Congress party and regional outfits. While it helps the saffron party politically, it also means that the BJP doesn’t need to deliver for its Hindutva base at all because the M4 gang is doing their job for them.

With so much vilification of Hindus going on, they will naturally gravitate towards a slightly pro-Hindu party despite all its limitations and flaws rather than voting for Congress and regional caste-based parties which are ideological fellow travellers or electoral allies of the M4 gang. When the choice is between those who are hell bent on proving Hindus as terrorists and those who are promising Ram temple (but may not deliver), it’s a no contest.

Second, when the media is too busy focusing on polarising the society through dubious reporting, real issues take a backseat. The party in power will become laid-back in tackling unemployment, lack of growth, farm distress, poor education and skills, etc when it knows that it has the election sewed up. Rather than indulging in whipping up hysteria, the fourth estate should go back to basics of journalism and try to inform the electorate rather than play activists.

Third, it will have a catastrophic impact on the Indian society and nation. The M4 gang is trying to conjure up fear of the majority in the minority community by selective highlighting of one type of cases and creating mountains out of molehills, it is natural that the biggest minority, which already suffers from siege mentality and let no opportunity go waste of playing victimhood, won’t sit back.

As we saw in Ranchi earlier this month, it will try to intimidate the state and the majority community by the power of mobs, and it won’t be pretty. The majority won’t like it one bit because their demonisation by the M4 gang is based on nothing but imaginary fear. The very people who never get tired of criticising the BJP for tearing the social fabric apart are the ones who are guilty of doing exactly that.

Fourth, the M4 gang is egging the minority community to play victimhood. ‘Dara hua Musalman’ chronicles and frenzy around these selective cases is incentivising anti-social and mischievous elements to cook up fake stories as we have seen recently with so many ‘forced to say Jai Shri Ram’ allegations getting busted throughout the country.

This further creates distrust of the minority community among other members of society and strengthens the perception of it being dishonest and devious leading to its alienation. Additionally, Muslims should think twice before playing into the hands of the M4 gang because they don’t want to be branded as ‘a community which cries wolf’ — saying there is a problem when there is not — because no one will believe them when they actually have a problem at their hands. Nothing can be more sad because real victims will be the worst affected.

Fifth, of course this hurts the Hindu community as well which is the main aim. As noted earlier, just like they tried to do with the cow, the M4 gang is trying to separate Shri Ram from Hindus by defaming the harmless greeting as some sort of a ‘war cry’ equivalent to Allahu Akbar which is seen today by non-Muslims as a sort of warning before someone is being attacked rather than a simple ‘god is great’ statement. This is being attempted with Jai Shri Ram slogan as well.

And it doesn’t matter whether the narrative is manufactured or not because the audience of M4 gang is not the crores of devout Hindus but a certain section of the majority community, the deracinated elite who can be easily guilt-tripped into spitting at their own heritage. If this influential bunch can be influenced to crack lame jokes at Shri Ram at stand-up comedy clubs (see the number of cow jokes they use in their material), their job is done. Denigrating the lord, who is an idol to millions and worshipped as mortal personification of righteousness on earth, is no mean achievement.

Clearly, the M4 gang has more upsides than downsides in continuing with their propaganda. Given this nexus, and their subscribers are a tiny minority, they are punching way above their weight. But when has winning wars been about numbers? It’s the strategy, stupid!