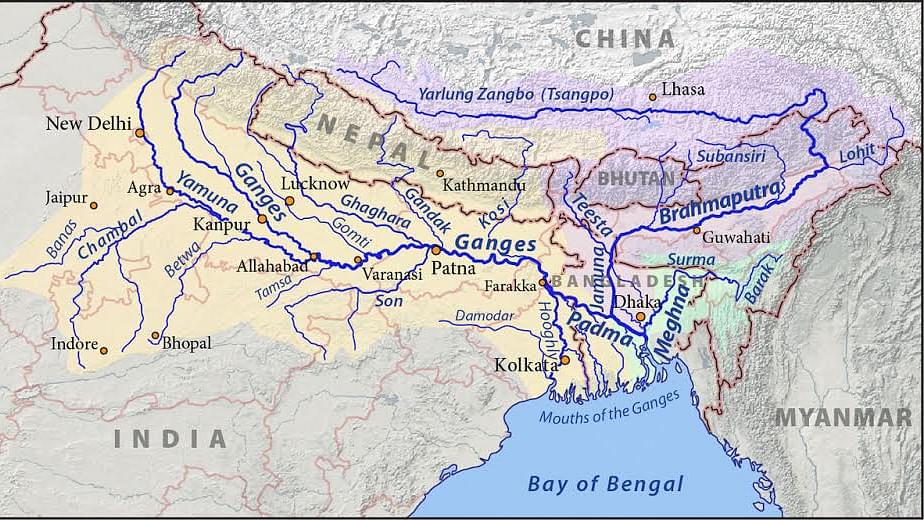 Since early October, people living on the banks of the Siang (as the Yarlung Tsangpo is called once it enters India in Arunachal Pradesh’s Upper Siang district) have found the usually crystal clear waters of the river turning turbid and slushy. The Siang, teeming with fish, turned unsuitable to even bathe in. And soon, the water level of the river also started falling appreciably.

The Siang is joined by the Dibang and Lohit rivers at the head of the Assam valley where it becomes the Brahmaputra. Alarmed local authorities tested the waters of the Siang at Pasighat (about 560 kilometres northeast of Guwahati) before the river is joined by the Lohit and Dibang. The tests, carried out at a laboratory of the state government’s public health engineering department by a high-tech photometer, revealed that the river’s turbidity count was 425 against the maximum permissible limit of 5!

Lok Sabha MP from the state, Ninong Ering, wrote to Prime Minister Narendra Modi last weekend about the change in the quality of the river water. He alleges that China has already started the groundwork for constructing a 1000-km tunnel to carry water from the Yarlung Tsangpo in Tibet to Taklimakan desert in the neighbouring Xinjiang province. China’s plans to build this tunnel – the world’s longest – was first revealed in this report of the South China Morning Post – late last month. Though China officially denied any plans for such a tunnel, it is now clear that it has surreptitiously started work on this tunnel.

China is well known for employing subterfuge and concealing the truth from neighbouring countries and the world, says Ering. “China’s denial (of plans to lay the tunnel) should never be taken at face value. And anyway, the reality on the ground falsifies China’s denial. If nothing is happening to the Yarlung Tsangpo in Tibet, why has the turbidity count of the river water changed so drastically,” asked Ering.

The deputy commissioner (administrative head) of East Siang district (through which the Siang flows before entering Assam and becoming the Brahmaputra) Tamyo Tatak told Swarajya that the waters of the river had, in fact, turned dark and muddy from May-June. “That time, we thought it was due to the mud and soil being brought down by the monsoon waters. But when the colour of the water remained the same even after the end of the monsoons, we started getting alarmed. And then we noticed that it was not just mud or soil that was being carried down by the Siang, but some fine cement-like substance also which makes the water of the river appear like slurry (cement mixed with water). This is unnatural and proves that China has undertaken some massive construction activity in Tibet that is affecting the quality of the river,” said the bureaucrat.

Ering, the Congress MP from the state’s East constituency, says that the colour and texture of the water “definitely shows that the suspended particles in the water of the river are not soil or mud that is being washed down”. “The river turning muddy during the monsoons is a natural phenomenon. But after the monsoons recede, the waters of Siang turn crystal clear. This year, the waters have remained turbid and, what is more alarming, a lot of fish have died. The water level of the river has also gone down and adventure enthusiasts have also suspended rafting, which is very popular on the Siang,” said Ering.

Significantly, it is not just the Siang whose water quality has declined so alarmingly. According to this news report, the waters of the Brahmaputra have also turned dark and turbid even at Guwahati and Tezpur, which are hundreds of kilometres downstream. The Central Water Commission (CWC), which is mandated to monitor water quality of rivers, has observed the change in the quality and colour of the water of the Brahmaputra downstream.

“This is a cause for alarm. The quality of the Siang water has declined so drastically that even after it is joined by the Dibang and Lohit, and some smaller tributaries, the water quality of the Brahmaputra much downstream has deteriorated,” said a CWC official. The Union Water Resources Ministry has been requested to ask the National Remote Sensing Centre (NRSC) of the Indian Space Research Organisation (ISRO) to ascertain river related activities on the Yarlung Tsangpo in Tibet. The Ministry of Foreign Affairs is also being requested to take up the matter with Beijing.

But, say experts, China is expected to deny any activity on the Yarlung Tsangpo. “Whatever it (China) is doing on the river, it has surely camouflaged it very well so that satellites won’t be able to detect any such activity. But China is definitely undertaking some major activity on the Yarlung Tsangpo and it is very likely related to its plans to construct the 1000-kilometre long tunnel to irrigate the arid zones of Xinjiang province,” said a senior CWC official.

Hydrologists who had travelled to China and are familiar with China’s mega projects involving diversion of river waters and construction of tunnels say that China has most likely undertaken some major explorations on the bed of the Yarlung Tsangpo. “Right now, China is busy with the construction of the 600-km-long tunnel and will divert waters from northwestern Yunnan to its central arid regions. This tunnel will cut through mountains thousands of feet above sea level and will be a test of China’s engineering prowess since it will pass through many fault lines. This 78 billion yuan ($ 11.7 billion) project is a rehearsal for the proposed 1000-km-long tunnel to divert waters of the Yarlung Tsangpo. The new technology, engineering methods and equipment being used for the construction of the Yunnan tunnel (which will carry 3 billion tonnes of water to irrigate 30,000 hectares of new farmland, create 3.4 million jobs and give a 330 billion yuan boost to Yunnan’s economy) will be deployed for the Yarlung Tsangpo tunnel as well,” said the expert.

China experts say that Beijing is not waiting for the completion of the Yunnan tunnel to take up construction of the proposed one in Tibet. “That is not how the Chinese work. The lessons being drawn from the Yunnan tunnel are most likely being quickly employed in the exploratory works for the tunnel in Tibet. This tunnel, according to Chinese hydrologists and engineers, is likely to start from Sangri county in the southern part of Tibet and will carry 10 to 15 billion tonnes of water of the Yarlung Tsangpo to the Taklimakan desert in Xinjiang,” said a former Indian diplomat who had served in China.

Though Chinese engineers have estimated that the cost of the proposed tunnel would be a very high 1 billion yuan for every kilometre, the cost is likely to come down with the new technology and engineering methods being improved and perfected in Yunnan. “It is likely that these new methods and technology is being tested in Tibet at present and that is why the quality of the water flowing down the Yarlung Tsangpo has been affected,” said the former diplomat. After all, the benefits of taking water to the Taklimakan desert and converting it into productive farmlands are too attractive for costs to come in the way of it, she added.

China spends millions of yuan transporting foodstuff to sustain its officials and large army in Tibet. “If Tibet’s food requirements can be met from farmlands in Xinjiang, then China will save huge sums of money. China is saying that the 1000-km tunnel will transform Taklimakan like the Central Valley Project (which diverted water from northern California to San Joaquin Valley and turned it into one of the world’s most productive agricultural regions) did in California many decades ago. Once the tunnel diverting water from the Yarlung Tsangpo to Taklimakan is complete, it will irrigate an estimated 150,000 square kilometres (1.5 crore hectare) of what is now arid wasteland and desert at Taklimakan,” said the former diplomat.

With China’s high agricultural yield (read this article), the new farmlands in Taklimakan will produce 9.75 crore tonnes of foodgrains, which is more than enough to meet the requirements of Tibet, including the large number of army and air force personnel stationed there. It will also be an engineering marvel and will serve as a striking demonstration of China’s engineering prowess to the rest of the world. Plus, the project will provide employment to more than 5 million people and boost Xinjiang’s and Tibet’s economies by 750 billion yuan ($113.49 billion). China will also be able to relocate indigenous Tibetans from Tibet to man farmlands in Xinjiang province and, thus, bring down the population of Tibetans in Tibet.

Thus, say experts, China is most unlikely to pay heed to any objections from India and will go ahead with the construction of the 1000-km long tunnel to divert the waters of the Yarlung Tsangpo to the arid zones of Xinjiang province. The economic, military and demographic benefits of this project for China far outweigh the costs it will incur and the censure it will earn from India and other countries.