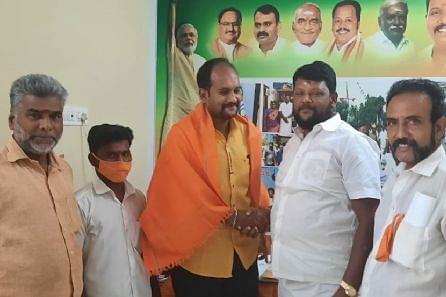 In its efforts to assert itself as a major political party, the BJP is trying to get disgruntled elements in both Dravidian parties in its rank with the DMK being the special target.

Coming as a feather in its cap in its efforts to rope in followers of Dravidian ideologies is the joining of Sathish Krishna, who is the grandson of Dravidian Kazhagam founder E V Ramasamy Naicker “Periyar” at Kumbakonam in Tamil Nadu’s Thanjavur district.

Sathish, who left the AIADMK to join the BJP, is the grandson of Periyar’s maternal aunt. He decided to join the BJP following the controversy over Kanda Shashti Kavacham, a Tamil hymn sung daily in praise of Lord Skanda in the houses of Tamilians.

He has reportedly been impressed with Prime Minister Narendra Modi’s leadership too. Another bonus for the BJP in Tamil Nadu is the joining of Ku Ka Selvam, who got elected from the prestigious Thousand Lights Assembly Constituency on a DMK ticket.

Selvam was expelled from the DMK last week for rebelling against the party, which failed to nominate him for a party post left vacant by the death of another legislative member J Anbazhagan due to coronavirus. The other reason for his expulsion was his meeting with BJP president J P Nadda in New Delhi.

Selvam will now be an unattached member of the assembly and he is expected to take up BJP's cause in the legislative house.

Selvam told the media last week that many DMK leaders and workers are bitter with the developments in the party, especially the promotion of DMK president's son Udhayanidhi, and it was a matter of time an exodus took place in the party.

A Tamil Nadu BJP source told Swarajya, on condition of anonymity, that the party’s vice-president V P Duraisamy, who joined the national party from the DMK, has got a free hand from the state party president L Murugan to try and woo more from the opposition party.

“DMK is facing problems internally in view of Udhayanidhi Stalin being promoted as the next leader. The development has resulted in many of the veterans and seniors being sidelined. The BJP is trying to take full advantage of the situation,” the source said.

Duraisamy has a good rapport with Murugan, given the fact that they hail from the same village. Thus, the former has been rattling the Dravidian parties with his statements which included the one in which he said the BJP will lead the National Democratic Alliance (NDA) in the state elections due in May next year.

On the other hand, even veteran DMK leaders such as Durai Murugan are bitterly disappointed over the happenings in the party.

Nothing can be more revealing of the DMK affairs than State Fisheries Minister D Jayakumar telling the media last week that the AIADMK would roll out a red carpet for Durai Murugan, DMK general secretary, if he switched loyalty.

“I have been in the DMK for decades. During the time of Kalaignar (the late M Karunanidhi), I had done a lot for the party. I knew Kalaignar would not do anything for me, still he knew how to keep me in good humour and ensure that I was not ignored. That is not the case now. Many seniors are simply being ignored,” a DMK leader told Swarajya on condition of anonymity.

The leader would not want to blame Stalin, though. “It only reflects his capability. He cannot rise to the occasion to lead the party or the state, in case DMK is voted to power. He has only that much stuff,” he said.

But DMK problems have emboldened the BJP to such an extent that the latter has a list of leaders of the former to try and win over.

Though observers point out that some of the DMK men, including Selvam, joining BJP have already been left out of the former’s electoral plans to try and regain power, BJP leaders say they are looking for some optics to score brownie points.

The ruling AIADMK is also witnessing a cold war between state Chief Minister Edappadi K Palaniswami (EPS) and Deputy Chief Minister O Panneerselvam (OPS). Though media reports today (17 August) said the controversy has blown over, nothing is certain until the ruling party heads for the hustings amid a strong anti-incumbency factor.

Last week, posters sprung up in Theni, the constituency from where OPS son Raveendranath was elected as member of the Lok Sabha amidst a sweep by the DMK, hailing the Deputy Chief Minister as the next Chief Minister.

This led to EPS sending a delegation of ministers to OPS residence on 15 August, following which the posters were pulled out. Despite the cold war, the AIADMK would want to get hold of someone like Durai Murugan.

The party has been lacking a good leader who can command the votes of people in northern Tamil Nadu. Durai Murugan can garner votes of the Vanniyar community as he still commands respect in the area, according to sources.

A veteran Dravidian leader, who has been a think-tank for both DMK and AIADMK, said that the problem in Tamil Nadu, especially DMK and AIADMK, was it now lacks a leader who can call the shots like the late M G Ramachandran or J Jayalalithaa or M Karunanidhi.

This is the reason for the problems cropping up in DMK and AIADMK. The BJP is trying to catch hold of these disgruntled elements, hoping to make an impact.

“The BJP probably thinks it can try and get (Tamil film superstar) Rajinikanth’s support in the elections. But there is a difference between Rajinikanth seeking votes for the party he plans to float and the BJP,” the veteran leader said.

The leader quoted an incident when the late M G Ramachandran (MGR) soon after founding the AIADMK proposed that he would prefer to continue acting and would rather focus on funding the party. He proposed that one of the senior leaders in the party could become the chief minister.

However, the AIADMK founder, who split with DMK and Karunanidhi to form the party, was told that people, especially rural women, would vote only for him and not for someone nominated by him.

“The party had to carry the slogan that MGR would become the chief minister to the mass and thus he was convinced to lead the party and its government. Same holds good for Rajinikanth. In fact, if he floats his own party, we will see an exodus of some good hands from the DMK and AIADMK,” the veteran leader said.

Rajinikanth has announced that he will float his party before the elections, though he has not announced any schedule. Those close to him say that he will likely float the party once the novel coronavirus situation eases.

For now, the BJP is trying to drive home the advantage and seems to be gaining from the Dravidian parties’ internal problems.