Engineering Unlikely Victories: What Is Behind BJP’s Win In Uttar Pradesh 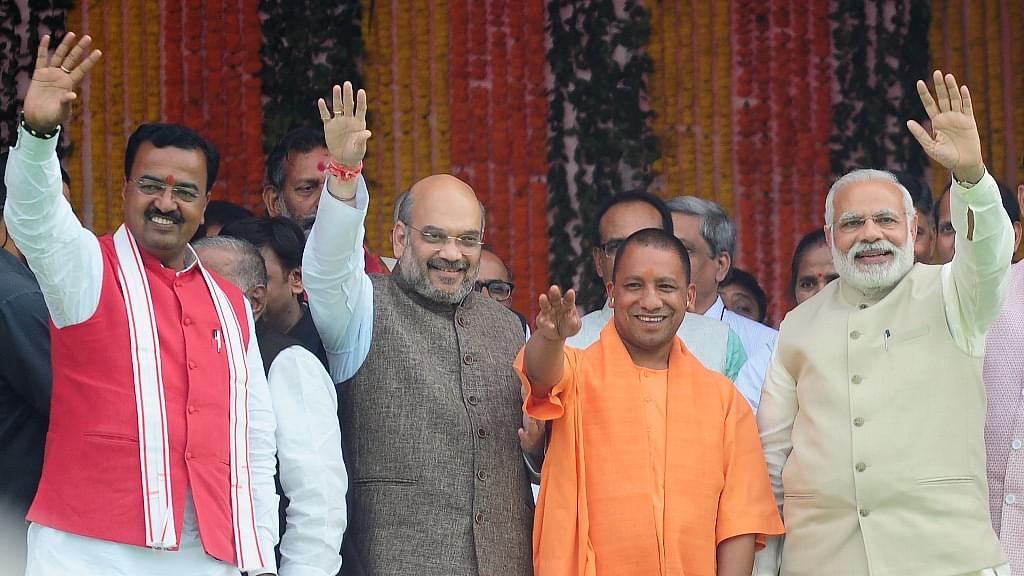 Even as eight states prepare to go into election mode in the next few months, and political parties pull all strands possible, predictability seems to be the last thing characteristic of election results in the country. While demonetisation was expected to hit the Bharatiya Janata Party hard, the Uttar Pradesh elections proved otherwise. The Amit Shah school of management was credited with the victory, but it certainly didnt work its magic in Bihar. So, What is it that works and how? This puzzle is what author Prashant Jha tries to decode in his book How the BJP wins: Inside India’s Election Machine.

Here is an excerpt on this feat of social engineering that worked its wonders in the UP election:

Three days before Uttar Pradesh went to polls on 11 February, the president of BJP’s UP unit landed on a small field in Saharanpur’s Gangoh constituency. Keshav Prasad Maurya belonged to a backward community. He was a product of the Sangh, a functionary of the Vishwa Hindu Parishad (VHP), before he contested elections for the UP assembly in 2012. In 2014, he rode on the Modi hawa, and became an MP from Phulpur – which was once Jawaharlal Nehru’s constituency. In early 2016, the BJP had made him state chief, in an obvious bid to woo the backward communities.

As he stepped out of the helicopter, a crowd rushed on to the fi eld to greet him. Maurya got into an SUV, the trademark of all North Indian politicians, to get to the venue of the public meeting.

The next car was packed with a dozen people. Om Pal Singh Saini introduced himself as the president of the All India Saini Seva Sangh. This was a Saini-dominated area, he said, with a tinge of pride. Sainis are categorized as OBCs in UP, and see themselves as a part of a larger community of Saini–Kashyap–Kuswaha–Mauryas, to which the BJP leader belonged.

‘Th is time, the BJP has shown us respect. The entire samaj is with the party, because Mauryaji will become chief minister.’ The community, he said, had swung between various parties in the past. But in the 2014 elections, it overwhelmingly went with Narendra Modi.

Ever since Maurya was made the state president of the party in 2016, it had made up its mind to stick to the lotus.

Three small farmers had come to the rally to listen to the state party president. One of them was a Gujjar, Ram Singh. He traced back his family’s political affi liations to Charan Singh, former prime minister, and one of North India’s most respected kisan netas, who had carved out a coalition of backward castes and Muslims, based on their peasant identity. ‘My father was with Charan Singh. I got attracted to the Ram Janmabhoomi Andolan and came to the BJP. After Kalyan Singh left the BJP, I voted for others. But in 2014, I returned to the party.’ Kalyan Singh was the BJP chief minister in the 1990s. A Lodh, he had been able to rally OBCs behind the party. But he steadily got marginalized in the party and left in 2009. He subsequently returned to the party and campaigned for Modi in 2014.

‘Both the Congress and Samajwadi Party only do the politics of one community. Th ey are communal. Congress can see only one community, BSP can also see only one community – see Mayawati keeps saying I have given ninety-seven tickets, and we all know about SP. It gave the family of Akhlaq [the man who was killed in Dadri over allegations of consuming beef ] one crore,’ said Ram Singh.

Without uttering the word Muslim, he had made it clear what he meant.

The BJP, Singh added, was a nationalist, rashtravaadi, party. But wasn’t the Congress a nationalist party as well? After all, it is the party that brought India freedom.

‘Congress is a national, rashtriya, party, but it does not have a nationalist, rashtravaadi, mindset.’

Om Prakash Saini was thrilled with the representation and respect off ered by the BJP to his community. Ram Singh was attracted by what he saw as the ‘nationalist’ rather than ‘communal’ outlook. Together, these sentiments would be the game changer in the UP elections.

The voices from the ground fi t in exactly with the scheme laid at the top by party strategists, which had three broad components – changes in the party’s organizational structure to make it more inclusive; reformulation of its messaging, so that backward communities felt both a sense of victimhood and a sense of emancipation; and alliances with parties with a base among these communities, despite the BJP’s overwhelming dominance.

Narendra Modi has turned himself into a leader of the poor while retaining the support of the better-off. In the background, Amit Shah is slowly transforming the BJP into a party of the less privileged castes, while retaining the support of the privileged. In the process, the BJP is moving from being a relatively exclusivist Hindu party to becoming an inclusive Hindu party. By identifying the most dominant political caste (which is not necessarily synonymous with the most dominant social caste) in a particular setting, and mobilizing the less dominant against them, Shah is weaving together unprecedented social coalitions. This remarkable experiment in social engineering lies at the heart of the BJP’s political success. And when it fails to carve out broad-based social coalitions, when it is seen as a party of merely the privileged, it collapses.

Excerpted from ‘How the BJP Wins: Inside India’s Greatest Election Machine’ by Prashant Jha, Juggernaut, 2017, with the permission of the publisher.