Even As SP Makes It A Now-Or-Never Battle, Modi Is Virtually Everywhere In Varanasi 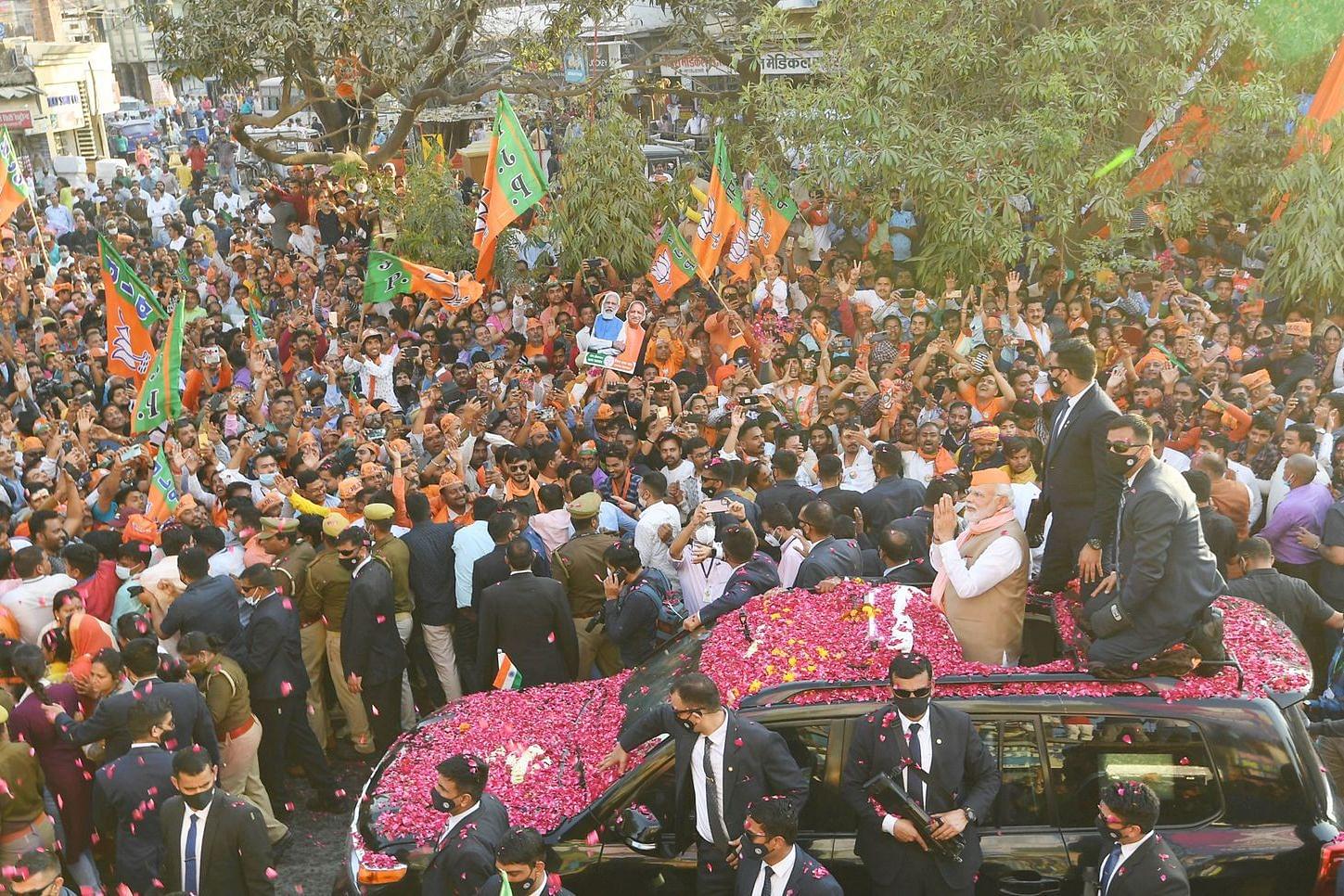 It was perhaps for the first time that Prime Minister Narendra Modi wore an orange or saffron coloured cap. It conveyed twin messages.

First, it symbolised the countdown to an early onset of Holi, hopefully for the BJP workers and sympathisers in the state, on March 10, when votes for the seven-phase election in Uttar Pradesh are to be counted. In his public rallies in the state, Modi has been talking about it at length. Several people in UP and in other northern Indian states wear such caps on Holi while having playing colours. On Friday afternoon and evening, the mood on streets of Banaras was similar -- festive, full of colours, song and dance.

Modi’s roadshow in the city, be it in the 2014 parliamentary elections when he had gone there to file his nomination as BJP’s candidate, or in 2017 when he did a roadshow campaigning for his party as the MP from the city or towards end of the 2019 parliamentary elections, has evoked strong emotions amongst people, turning the overall atmosphere celebratory.

His orange cap was also in sync with overall colour in city, to be more specific, through the areas he passed. The size of the enthusiastic crowd and its vigour to greet the leader was such that it took him about an hour to cover a one km distance, and about three hours to cover three kms.

Second, it was also in sync with the colour, saffron, which the party symbolises. He took it off once he reached the re-developed Kashi Vishwanath Dham.

Anyone who has visited the Kashi Vishwanath temple before and visits it now, after Kashi Vishwanath corridor has been built and the Kashi Vishwanath Mandir complex has been redeveloped can only be in awe of what they see. It speaks volume as to what a strong will, well conceived plan and determination to organising resources to finish a seemingly impossible project can deliver, that too in record time.

This was Modi’s dream project. The redeveloped temple premises is a dream come true for an overwhelming mass of people, within and outside Kashi. This was his second visit to the temple in less than three months – first to inaugurate the project and on Friday evening to seek Lord Mahadev’s blessings after conclusion of his roadshow. On both the occasions, he had his own share of lively playfulness with giant damru.

Modi’s roadshow, particularly him standing out in the open from the sunroof of his bullet proof SUV, is a nightmare for security agencies concerned. In modern day security scenario and his threat perception, it goes without saying that it’s a huge security risk. But the idea, which Modi seems to send across year after year, occasion after occasion, is: why fear when you are among your own people?

Later in the day, he also paid a visit to the famous local hangout, Pappu's chai stall at Assi ghat and had tea with common people, inspected the Banaras Cantt station and Khidkiya Ghat.

The poll schedule both for parliamentary and UP assembly since 2014 has been such that Varanasi votes in the last phase. Modi’s presence in the city—his road shows, his rallies and his meetings with different groups in the concluding days of poll campaign—has yielded desired results in Purvanchal region in 2014, 2017 and 2019.

Fifty four seats are going to polls on March 7 in Azamgarh, Mau, Jaunpur, Ghazipur, Chandauli, Varanasi, Mirzapur, Bhadohi and Sonbhadra.
The BJP and its sympathisers are banking heavily on Modi’s charisma to make their scorecard better in the final phase. After moving around Banaras one gets a feeling that BJP is getting a good challenge in the Sevapuri and Rohania assembly segments. In one of these two, Rohania, BJP ally Apna Dal has fielded its candidate. But talk to any BJP sympathiser and he would say “Modi ji ke aane se sab theek ho jayega.”

That sentiment is prevalent not just in Banaras but in Ghazipur, Mirzapur and elsewhere too.

BJP rivals have recognised this potential through hard ways in the last three elections since 2014. This time they are thus not taking chances. Akhilesh Yadav along with his ally, RLD’s Jayant Chaudhary and even West Bengal Mamata Chief Minister Mamata Banerjee camped in Banaras, holding press conference, road show and rallies. Samajwadi Party’s supporters are on an overdrive, they believe it’s a now-or-never situation for them. They are trying everything they could to give the final push.

Priyanka Gandhi Vadra is also trying hard to gain her share of publicity and some reach among people. Her roadshow in Banaras on Thursday evening could only evoke a poor to lukewarm response. But she is not done yet. Brother Rahul Gandhi, who has so far been almost invisible in UP elections, also made his presence in Varanasi city yesterday.

Modi’s presence and his goodwill among people at large is sure to overshadow BJP’s rivals by a long distance in the final phase.