Every Street Became The Janmabhoomi: How These Devotees From Southern India Took The Ayodhya Movement To Every Corner They Visited 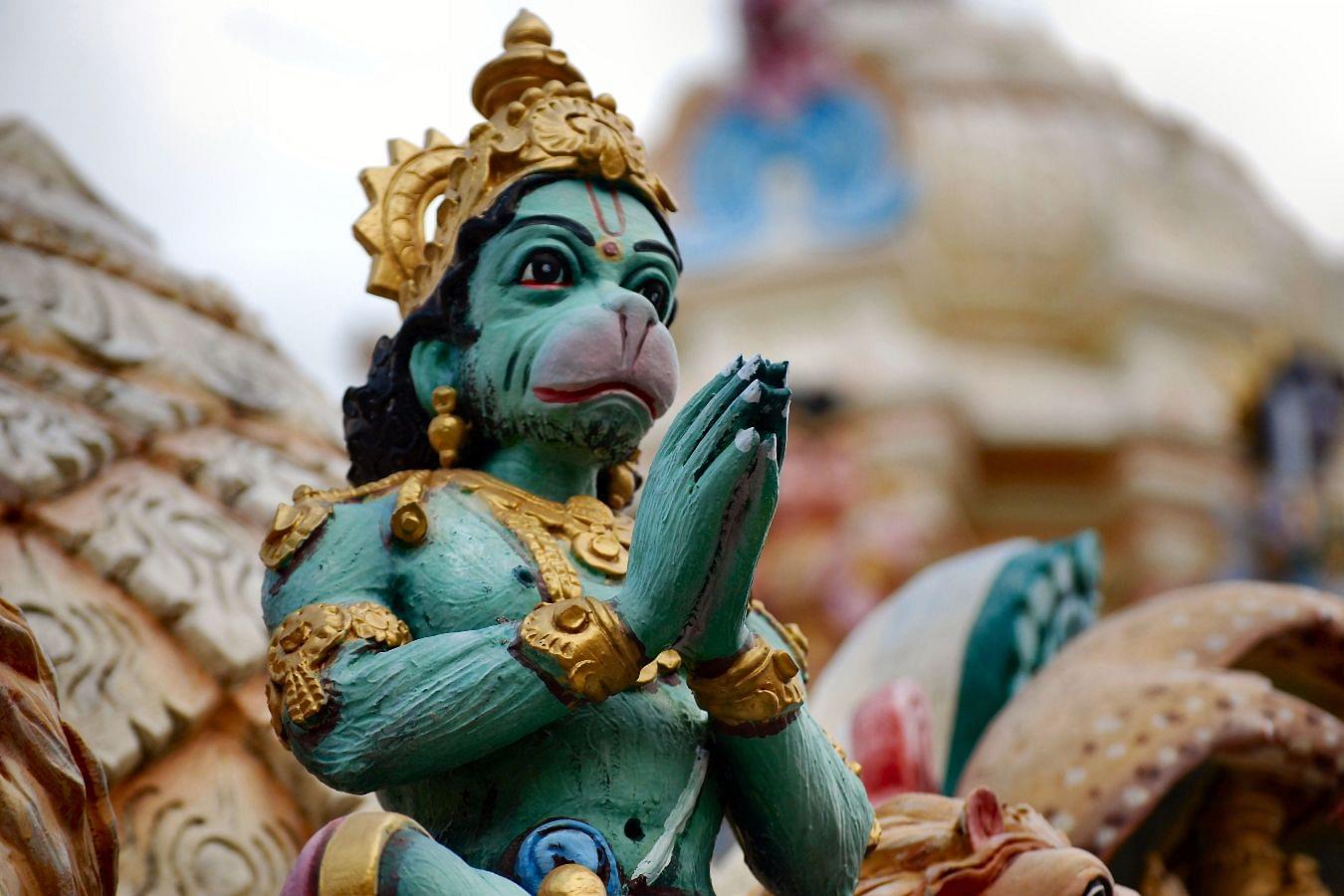 The association of Sri Ram Janmabhoomi Movement with southern India is quite strong.

The sacred geography of the Ramayana is spread throughout the southern regions and is as strong as in northern India, if not stronger.

The stellar role of leading lawyer K Parasaran, who is also a great Rama devotee, is well known.

Here, we look into a few more memorable contributions from the south.

A weekly Tamil magazine, Vijayabharatham, published in its issue dated 9 November 1984 a long article on Ayodhya and then a short verse:

Does not a Ram Bhakth have right to step inside Ram Janma Bhumi, the youngster wept. Yogi laughed and said, if you do not have the guts to enter then you do not deserve the right to Mandir.

Yogi Adiyanath, who would be Uttar Pradesh Chief Minister, was then a school boy, somewhere in then undivided state.

As a teenager, I remember Sri Muthuswamy, then in his late sixties or early seventies. He went from our town to participate in the kar seva of 1990.

The UP government of Mulayam Singh Yadav had formed at least five concentric circles of police force sealing all access to Ayodhya.

All buses were stopped outside Ayodhya. The devotees of Lord Ram had to walk through the wheat fields avoiding police.

Mostly the devotees from different states joined as groups and started walking together. They all spoke different languages but their hearts beat to the same mission: "Here we come infant Rama: Shall build you the temple right there at that spot."

When Sri Muthuswamy could not walk, the devotees from other states carried him on their shoulders in a makeshift palanquin-like structure.

The way the old veteran Ram devotee was carried on the shoulders of fellow Ram bhakts became one of the inspiring anecdotes for the future generations.

There have been many such Muthuswamys, who had contributed irrespective of their age and health conditions.

From Kanyakumari, the southernmost tip of the Indian mainland, to Kashmir, there have been contributors to the Ayodhya movement, which have made the temple a reality today.

Here we see those squirrels and Jambavantas – both equal in the eyes of Sri Ram – who contributed to the building of the temple.

A great pillar of support for the Ayodhya movement from the south had been head of the Pejawar Mutt His Holiness Sri Vishvesha Tirtha Swami.

Part of the Vishva Hindu Parishad (VHP) from its very early days, he was also witness to the historic 'untouchability abolition' resolution endorsed by various dharma acharyas.

He was steadfast in his support for the Sri Ram temple in Ayodhya. With every possibility of all forms of intimidation from the anti-temple Indian state then and state government, the Pejawar Swami stood by the temple movement.

Like most of the leaders of the movement, he was not for the demolition of the disputed structure as such. But when it happened, he was not apologetic about it. "I have no regrets for Babri demolition. It was a good and timely decision. We were happy when the demolition took place on December 6,” the seer had said in an interview.

Equally important and strenuous was the role of His Holiness Sri Jayendra Saraswati Swami of the Kanchi Peeth.

He not only supported the movement but went out of the way to constantly engage in dialogue with the leaders of the Muslim community for an amicable solution, trying to change their mind.

Convinced that at Ayodhya a temple should be built for Sri Ram, he wanted it to be done with the consent of all. He relentlessly tried despite his failing health.

He also had to suffer persecution of all sorts after the United Progressive Alliance (UPA) government came to power.

The seer faced backstabs too because he was striving for pan-Hindu unity. But all that did not stop him. One can be quite sure that the Swami, now in Samadhi, though beyond dualities, should be happy that the temple is rising.

In the realm of academicians, one should thank the late Dr Iravatham Mahadevan.

Dr Mahadevan, quite a great scholar, was not exactly well disposed towards the Ayodhya movement. But it was he who stood by Dr K K Muhammad, the archaeologist who vouched for the presence of a temple under the Babri structure.

It was through his encouragement and moral support that Dr Muhammad could withstand all the pressures and reveal the truth about Sri Ram Janmabhoomi's archaeological facts.

We need to remember with folded hands Dr Mahadevan for his unwavering commitment to truth despite the ideological differences.

Dr K V Raman, the archaeologist from Madras University, provided crucial evidence supporting the findings of Dr B B Lal, with respect to the pillar bases and other findings.

He clearly stated that there was a Vaishanvaite temple, the remnants of which were found below the Babri structure.

Another academic who contributed to the Sri Ram Janmabhoomi movement, by standing steadfast with truth, was archaeologist and epigraphy expert Dr K V Ramesh.

He took a stand, and for five days in a row, and again after a break for two more days answered all kinds of cross examination questions from the anti-temple lawyers. He also provided indisputable inscriptional evidence.

Dr K V Ramesh was also the one who established the uniqueness of south Indian Brahmi.

Today, K N Govindacharya is in self-exile from politics and more inclined towards spiritual sadhana. A veritable acharya of social harmony, when forces were trying to break asunder the very fabric of Hindu society, he toiled on the ground with a mission of Hindu unity and a vision of a society with harmony and justice.

In the 1980s and 1990s, it was he who expanded the Hindutva movement and took up the equally challenging mission of showing in perspective what the Ayodhya movement was about.

Equally important was the role of S Gurumurthy now the editor of Tughlak magazine.

A friend remembered how a sangh official and Gurumurthy were working for Ayodhya movement and they were travelling in a bicycle late one night, S G, as he was known, felt some chest pain. "I do not want to go without seeing the temple at Ayodhya" were his first words, the friend told this writer.

Such anecdotes show the kind of efforts such people put for the movement in southern India. None sat in ivory towers and every one worked at ground zero.

The organising skills of Sri Shanmuganathan and his mastery in Tamil oration took the message of Ayodhya to every village in Tamil Nadu. He travelled non-stop for months with scant regard for his health.

Though not with us today, Surya Narayana Rao was another master organiser and orator who spread the mission of Ayodhya throughout Tamil Nadu.

All these great men worked day and night, forgetting all their comforts. If Tamil Nadu, despite all the breaking India forces trying over night to destroy it, is still a land of Dharma, then it is because of the toils of such men – seldom spoken about outside the state.

In Karnataka, they obtained 6,003,796 signatures from 19,110 villages and from then undivided Andhra 4,845,261 signatures from 10,491 villages. These signatures were obtained after the demolition of the structure and were submitted to the President of India.

Here, we need to point out that at least two Hindus from southern India, quite popular among the Hindutvaites today, were quite critical of the movement.

‘Cho’ Ramaswamy, who in his later days became more spiritual, initially saw the Ayodhya movement as only a political strategy and nothing beyond.

He believed that the Bharatiya Janata Party (BJP) would indulge in sophistry once in power and that "they would say we would call engineers from outside and slowly shift the disputed structure intact to another site and thus procrastinate indefinitely”.

So, when the demolition happened ‘Cho’ came out with a completely black cover for his magazine – something he had done only during Emergency. Later, he changed his views.

Dr Subramanian Swamy was then a vitriolic anti-Hindutva politician. Very much like Shashi Tharoor now, he distinguished between Hindu Dharma and the Ayodhya movement which he considered as only anti-Muslim.

He wrote in 1992: "The Ram Janmabhoomi issue at its core was whether the Muslims have the title deed to the Babri Masjid. There was a masjid which was surreptitiously occupied on the night of December 22, 1949".

All this he wrote after the massacre of kar sevaks by Mulayam Singh Yadav's administration, with whom Dr Swamy had quite friendly political equations.

Yet, after more than a quarter of a century, he would attach himself to the legal struggle for the Sri Ram Janmabhoomi and consider himself as one of the 'liberators' of Ayodhya.

Among the Dravidianist politicians, the late J Jayalalithaa was a great supporter of the movement.

She openly asked at the National Integration Council meet: "If we cannot build temple for Sri Ram at Ayodhya where else can we build? In Pakistan?"

Then there have been countless ordinary Hindus from southern India, like you and me, who simply love Sri Ram – they who form the silent majority.

They stood by the Sri Ram Janmabhoomi movement. A friend remembered how Sri Rama Shila Yatra and Sri Rama Jothi Yatra were received with great enthusiasm in every village around Karur where he lived. Women came with lamps and carried Sri Rama Jothi to their homes.

It is easy to make the ordinary Hindus rooted in the tradition and Dharma to see the plain truth but not the educated class, who have pretensions of knowledge and parade cultural illiteracy for perspective.

That task was taken up by the Chennai-based organisations Vigil and Centre for Policy Studies. They organised debates and dialogues on secularism. They hence undertook the monumental task of making the intelligentsia realise the "new clothes of the emperor" they were wearing.

They brought the organisers of the Ayodhya movement as well as people like N Ram, Dravidianist Nannan etc, on the same dais and these events exposed the propaganda that the movement was not founded on sound traditional, intellectual and historical premises.

Shivaram Joglekar, whose vision became 'Vigil' passed away in 1999.

But the intellectual discourse for the Ayodhya movement owes a lot for the silent, self-denying work of Joglekar.

The Centre for Policy Studies brought together even Muslim League leaders, archbishops, eminent ‘secularists’ and stalwarts of Hindutva movement as well as the Gandhian historian Dharampal.