Explained: How Christian Michel Was Brought To India 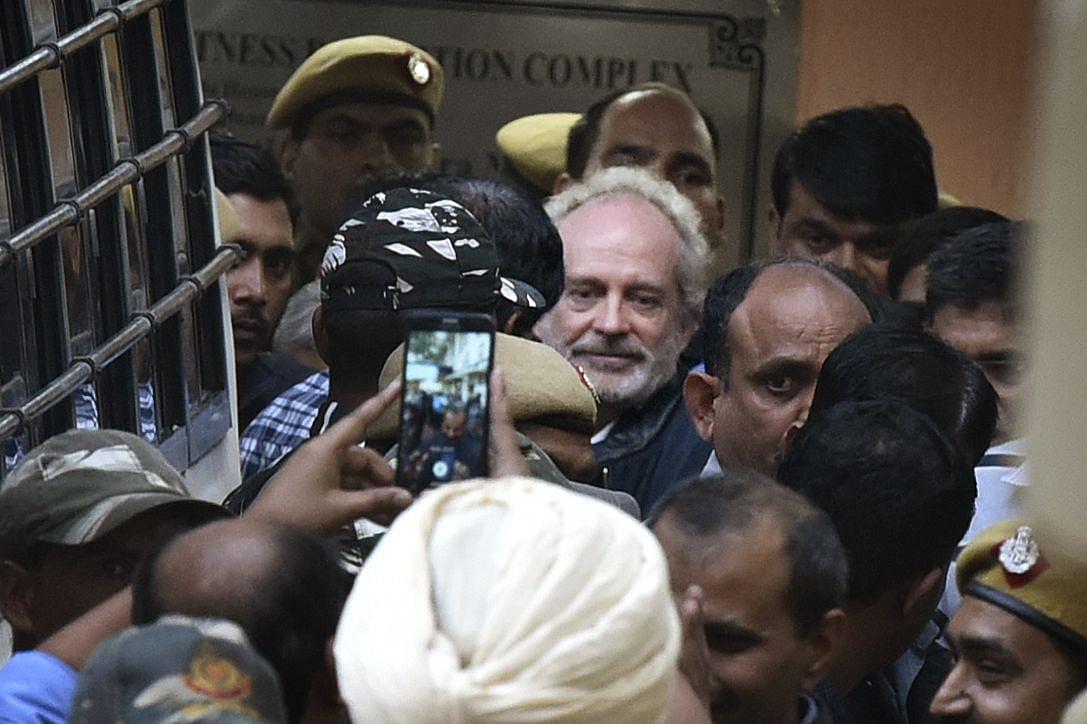 James Christian Michel, the alleged middleman in the multi-crore AgustaWestland chopper deal, leaves after he was produced at a CBI court in Patiala House Court on December 5, 2018 in New Delhi (Raj K Raj/Hindustan Times via Getty Images)

It was probably one of the most important extraditions in recent times. James Christian Michel, the alleged middleman in the AgustaWestland VVIP chopper scam was brought down to India on Tuesday after he lost his appeal against extradition was rejected by the Court of Cassation in Dubai.

The Central Bureau of Investigation (CBI), which is probing the scam that allegedly took place during the United Progressive Alliance (UPA) regime, will have a host of questions to ask Michel. They would range from the mysterious reduction of the service ceiling height of the chopper from 6,000 to 4,500 metres and also his contacts in the Defence Ministry then, who helped the chopper firm to secure the deal.

The CBI calls him a historic consultant for AgustaWestland and says that he had visited India over 100 times. He sensed that there would be competition coming from M/S Sikorsky. He went out of his way to disqualify the competition, the CBI also says.

During the investigation, the CBI found that he managed to wipe out the competition from Sikorsky despite the firm quoting a much lower price. This is something that the CBI has been probing hard, and now Michel would able to detail how Sikosky was disqualified in the trial stage itself, despite quoting a much lower price. The CBI alleges that Michel through his contacts in India ensured that the financial bids by Sikorsky were not opened.

Shortly before Michel arrived in India, the CBI issued a note to journalists, detailing his involvement in the scam. The note said that Michel who was avoiding criminal proceedings in India is being extradited by UAE authorities to India. Further it said that the entire operation under the guidance of National Security Advisor Ajit Doval was coordinated by interim CBI chief, Nageswara Rao.

The statement said that Michel had entered into a conspiracy with several persons, who abused their official position to reduce the service ceiling height from 6,000 metre to 4,500 metres. Following this, the contract of 556.262 million euros was awarded to AgustaWestland for the procurement of 12 VIP/non VIP choppers.

The statement by the CBI also said that Michel was made the controller for two other middlemen, Ralph Guido Haschke and Carlo Gerosa Renzo Lunardi, the then commercial manager, AgustaWestland proposed his appointment to which Giuseppe Orsi, CEO AgustaWestland (during 2005-2011) agreed, the note also added.

A meeting was held in July 2006 at Cascina Costa, Italy, in which Michel’s name was proposed to guide both Haschke and Gerosa. The role was to scout and monitor activities with regard to the acquisition of choppers in India.

The CBI further said that Michel entered into 12 contracts through his firms Global Trade & Commerce Ltd London and Global Services FZE, Dubai, UAE with Finmeccanica, AgustaWestland, Westland Helicopters UK to legitimise the illicit commission on the procurement of VVIP helicopters by Ministry of Defence, India.

An amount of approximately Rs 295 crore or 47.27 million euros was paid to the firms of Michel by Finmeccanica Group, the CBI said in the note while also adding that this amount was a kickback.

The Diaries And The Media

The CBI has recovered many hand-written diaries detailing the alleged kickbacks paid for the choppers. One of the notes suggested that he had paid kickbacks to several persons. However, one suspicious entry that finds a mention is a kickback paid to one AP and family. However it was alleged by Michel himself that the diaries were written by Haschke.

Recently, when Michel was still in Dubai, his lawyer had claimed that his client was being forced to sign a false confessional statement naming former Congress president Sonia Gandhi in return for his personal exoneration. This was however denied by the CBI and the agency said that it had never questioned him in Dubai.

The CBI however alleges that Michel had paid off several politicians, journalists and officials to ensure that the deal was swung in their favour.

CBI officials tell Swarajya that another key job that Michel was given was to manage the media. He would give feedback on media activities relating to the deal. His meetings with several media persons were under the scanner, when the probe began. He would be questioned about that too, the CBI officer also said.

His primary job was to report on the narrative by the media on the chopper deal. The CBI says that it has evidence against him about the reports he had sent out apart from the meeting he held with some persons in the media.

Also under the scanner is that infamous junket for journalists to Italy organised by Finmeccanica. The agencies believe that some journalists may have received some kickbacks during this fully paid trip that was arranged under the watch of Michel. The idea was to offer kickbacks to journalists to ensure that the narrative was in favour of AgustaWestland.

A document too had surfaced in which it was suggested a sum of 6 million euros was used to handle the media. Bharatiya Janata Party leader, Meenakshi Lekhi too had raised the same issue in 2016, when she alleged a sum of Rs 50 crore was paid to manage the Indian media.

In 2016, an Italian court had passed a judgment in which it named several persons. The 225 page judgment had revealed references to Sonia Gandhi, Oscar Fernandes, Manmohan Singh and Ahmed Patel.

Page 2014 of the judgment speaks about a 2008 letter that was seized from the home of Haschke. The letter written by Michel to Peter Hulet, the then Indian region sales head of AugustaWestland says, “dear Peter, since Mrs. Gandhi (Sonia Gandhi) is the driving force behind VIP will no longer fly in the MI-8. Mrs. Gandhi and her closest advisers are the people who the British ambassador should target..Prime Minister Manmohan Singh obviously main figure, then there is Secretary (Sonia's Political Secretary) Ahmed Patel”

The CBI would also ask Michel to decode some of the handwritten notes that find a mention in page 9 of the judgment. These notes speak about how the total kickbacks were divided between politicians, bureaucrats and Air Force officials. There are also handwritten notes that speak about a kickback amounting to 16 million euros for Political, AP and Fam. This would be crucial and the CBI would seek from Michel, what these code words mean.

The chase began in 2014. First a non-bailable warrant was issued against him in September 2015. Two months later a red corner notice was issued and his arrest took place in the UAE in February 2017.

The CBI requested an extradition on 19 March 2017 through diplomatic channels. On 1 September 2017, a chargesheet was filed and the court took cognisance of the same a month later.

On 19 November 2018, the Dubai court upheld a lower court’s decision to extradite him, following which an official order was passed. The entire operation was supervised by Ajit Doval. A team of the CBI led by Sai Manohar, the joint director, executed the entire operation, before James Christian Michel was finally brought down to Delhi.