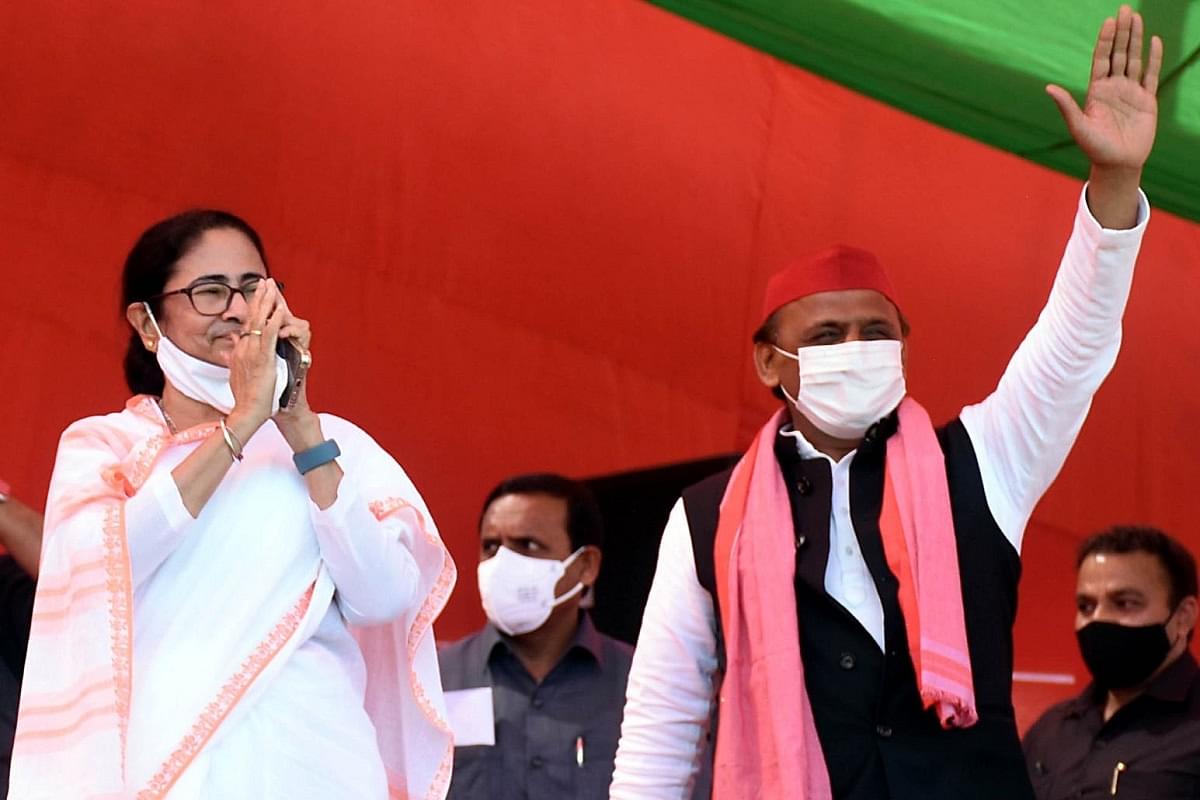 Mamata Banerjee with Akhilesh Yadav at the Varanasi rally.

Trinamool chief Mamata Banerjee went to Varanasi on Thursday to campaign for the Samajwadi Party (SP) there.

True to style, she heaped abuse on her adversary — the Bharatiya Janata Party (BJP) — and particularly Uttar Pradesh Chief Minister Yogi Adityanath who she called a ‘bhogi’ (one who craves for material pleasures).

Banerjee also, in her trademark manner, tried to play the martyr. Trying to create a mountain out of a molehill, she projected a minor black flag demonstration by members of a small Hindu outfit as an attempted attack on her.

Members of the Hindu Yuva Vahini, founded by Yogi Adityanath, waved black flags at her convoy on Thursday evening, as she was on her way to witness the aarti at Dashashwamedh Ghat, and shouted ‘Mamata go back’ slogans.

An angry Banerjee had stopped her vehicle and got out of it to face the demonstrators. Police had a tough time preventing the showdown with the demonstrators that the Trinamool chief seemed to be itching for.

Also, she carried her petulance to the Dashashwamedh Ghat and refused to sit in the chair that had been kept for her, and instead an angry Banerjee sat on the steps to watch the famous aarti.

At the campaign rally, she addressed in Varanasi on Friday, she projected the demonstration as an ‘attack’ and an attempt on her life. She also railed against the BJP for staging the ‘attack’ which, she said, violated her fundamental right to travel anywhere in the country.

It is a different matter that Banerjee had conveniently forgotten the attacks on senior BJP leaders, including party president J P Nadda, by her party goons during the campaign for the 2021 assembly polls in Bengal. Nadda’s convoy was subjected to brickbats and even the vehicle he was travelling in suffered extensive damages after being hit with bricks and sticks.

Also, Banerjee had herself labelled BJP leaders coming to Bengal from other states as ‘outsiders’ and her poll pitch last year centred around Bengali sub-nationalism and parochialism. Friday saw her asserting that as an Indian citizen, she had the inalienable right to campaign anywhere in the country.

But all that aside, Banerjee could not have not known that her angry speech in Varanasi would not sway even one voter and will have zero effect on the electoral outcome there. Banerjee has no traction in Uttar Pradesh, far less in Varanasi.

Banerjee, say political analysts in Uttar Pradesh, counts for nothing in the populous state. She has zero appeal among the electorate of that state and her angry speeches are highly unlikely to cut any ice with the electorate.

So why did Banerjee go to Uttar Pradesh to campaign there? And why did she choose Varanasi? The answer is not far to seek: Varanasi happens to be Prime Minister Narendra Modi’s Lok Sabha constituency and Banerjee reckoned that her belligerent electoral campaign in the city considered holy by Hindus would symbolically amount to taking her political battle with the BJP right to Modi’s doorsteps.

When Modi started frequenting Bengal in the early summer of 2019 to campaign for his party in the state, an angry Banerjee had said she would get back at him by campaigning against him in Varanasi. She repeated this ‘threat’ when Modi made multiple campaign trips to Bengal last year.

That explains why Banerjee chose to go to Varanasi to campaign against the BJP there, but only partly. The bigger reason is that she fancies herself as the prime minister-in-waiting and so thought that campaigning against the BJP in the Prime Minister’s constituency would boost her stature at the national level.

Banerjee, say those who know her, harbours the hope that she will get to occupy the Prime Minister’s chair in 2024. It’s based on far-fetched and naive assumptions that while the Congress would repeat its 2019 electoral performance in 2024, the BJP would also not succeed in securing a majority.

That is why the Trinamool chief is intent on projecting herself as a pan-India politician. And it is this quest to cultivate such an image that took her to Varanasi. True, the sense of retribution that overwhelms her often also played an important role: since Modi campaigned in Bengal against her, she would campaign against Modi and his party in Varanasi.

Banerjee’s aides, and her senior partymen, feed her delusion that she will become the prime minister in 2024. That’s why she is now convinced that the prime minister’s post will be her’s two years down the line.

Driven by this, Banerjee will campaign for other regional parties in other states where assembly polls are scheduled before the 2024 Lok Sabha elections. Her campaigns in those states will not get her hosts any votes for sure, but she hopes that her efforts will establish her as a pan-India leader.

Banerjee reasons that Modi was also a chief minister before he jumped on to the national political stage before the 2014 Lok Sabha polls, and eventually became the prime minister.

Banerjee, of course, overlooks the vital fact that Modi had led his state (Gujarat) to prosperity and his ‘Gujarat model of development’ had already caught the nation’s attention before he became the BJP’s prime ministerial candidate.

Also, Modi possessed, in public perception, a national outlook and a strongman image that Banerjee woefully lacks. People perceived him as possessing good governance skills, as a leader who would be able to replicate the ‘Gujarat model’ at the national level and drive India towards prosperity.

Banerjee, in contrast, presides over a poor, revenue-deficit state that she has driven deeper into debt with her populism. She is widely perceived to be lacking in governance skills.

Nonetheless, Banerjee likely believes that she will be able to replicate Modi’s steps from Gandhinagar to New Delhi. That’s why she went to Varanasi, and will go to other states as well, to project herself as the most vocal politician against the BJP.

Pertinently, she did not go to Goa where her party had invested huge resources to contest the polls. She has withdrawn from Manipur where her party won seven seats in the 2012 assembly polls and one seat in 2017.

She also did not go to Tripura, another state that she has been eyeing, to campaign for the civic polls held in that state late last year. She knew that her party, which had also invested a lot of money in that northeastern state, would fare poorly in those civic polls and so she kept away from that poll campaign. That is exactly the same reason why she has kept away from Goa this time.

Incidentally, the Trinamool’s foray into Tripura and Goa were driven by Banerjee’s desire to take her party beyond Bengal’s borders after her spectacular success in the 2021 assembly polls in Bengal.

But she has perhaps realised that the goal of making the Trinamool a pan-India party cannot be realised. She also realised that she ran the risk of losing stature if her party fared poorly in the Goa elections even after she campaigned in that coastal state.

But her party has no stakes in Uttar Pradesh and if Akhilesh Yadav loses there, she will not have to share the blame for his defeat.

In the final analysis, political ambitions and a desire for retribution is what took Banerjee to Uttar Pradesh — a journey that will not yield any dividends for her or her hosts.