Fact Check: Maheshwer Peri Is Wrong About The Economy 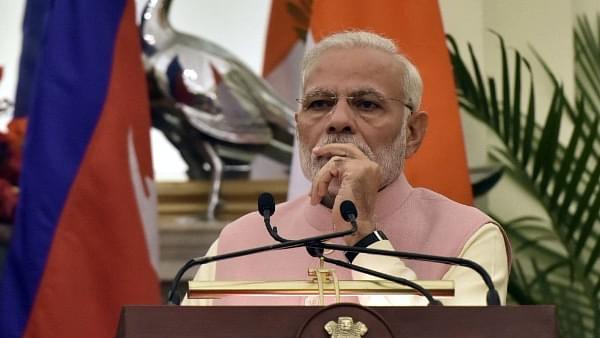 Prime Minister Modi has said he welcomes reasoned criticism but that all he gets are allegations. (Sonu Mehta/Hindustan Times via Getty Images)

In his recent town-hall discussion with screenwriter Prasoon Joshi in London, Prime Minister Narendra Modi said he welcomes reasoned criticism as it is essential for a vibrant democracy but that, unfortunately, all he ends up getting are allegations, without proper research. In response, Careers360 chairman and chief executive Maheshwer Peri on 19 April put up 10 data points “for Mr. Modi to chew” in a Facebook post that has since drawn plenty of attention.

A quick fact-check on these ‘data points’ and one can immediately conclude that they don’t stand the test of research that Modi earnestly requested his critics to do. From outright lies to wilful distortions, almost none of the 10 points raised by Peri stand up to scrutiny.

Let us run through these ‘data points’ and see what’s wrong with each one of them.

The twist here lies in linking ‘write-offs’ to recoveries; these are two independent processes. Write-offs pertain to balance-sheet management of a particular bank, which may not have any bearing on the recovery process of the non-performing assets (NPA). Amount recovered is the pertinent figure (and not whether it is from the written-off asset or an NPA still in the books of the banks), and that has gone up from Rs 37,160 crore (for public sector banks alone) in 2011 and Rs 64,800 crore in 2013 to over Rs 1 lakh crore in 2016-17.

This is a grossly misleading statement, intending to convey that the recoveries are substantially lower now than in the United Progressive Alliance (UPA) era. The reality is exactly the opposite – the recoveries now are well over three times the recoveries in the UPA era; however, the Reserve Bank of India (RBI) defines recovery percentage as “Reduction in GNPAs during the year to outstanding GNPAs at the beginning of the year”. The denominator in this ratio, the gross NPA of public sector banks, increased rapidly in the last few years, thanks to the UPA’s legacy of profligate lending; NPAs increased from Rs 74,000 crore in 2011 to Rs 6.8 lakh crore in 2017, an almost 10 times increase!

As against these numbers, the recovery during this period moved from Rs 37,160 crore in 2011 to Rs 1 lakh crore in 2017, a substantial increase in recovery by any standards. This rapid increase in gross NPA is the reason for the apparent drop in recovery rates, not any actual drop in NPA recovery.

See the NPA closing balance and recovery in 2011 and 2017 below, for a real assessment of the recovery.

With the new Insolvency and Bankruptcy Code (IBC) in place, all the defaulters are facing heat for the first time ever, and the recovery rates are likely to jump substantially in 2018. Early evidence of this can be seen from the successes in Electrosteel acquisition by Vedanta and Bhushan Steel acquisition by Tata Steel.

As is evident, the statement “NPA recoveries at its lowest” is a clear distortion. The recoveries are happening at a brisk pace; the gross NPA that were unearthed are of a much larger magnitude, which the government should have brought out all at once in 2014. But as the Prime Minister had suggested in his interview with journalist Navika Kumar for Times Now, this would have resulted in a loss of confidence among foreign investors and would have resulted in several unintended consequences.

This is a lie. The source for this “4.1 lakh” figure is the Quarterly Employment Survey (see below – the columns 4 to 7 indicating quarterly change in jobs, adds up to 4.1 lakh)

Here’s what’s wrong with the claim:

b) It covers only those establishments that were operational in 2013-14 and tries to assess change in the employment scenario in these establishments; any new company formed after 2013-14 is ignored in this survey, which is clearly specified in the report itself.

c) This has a level estimate of just about two crore of total employment in these eight sectors; in contrast, India has a total labour force of close to 50 crore. While the share of formal employment in this number is fiercely debated, the range in the debate extends between six crore to 10 crore and not the two crore covered in the survey. To put things in perspective, India has two crore employees only on government rolls (across central, state, and local bodies). So, this survey is definitely not representative of all formal sector jobs in India. On top of that, to measure only the ‘change’ in this survey to declare only four lakh formal jobs were created in 2016-17 is naive or mischievous – readers can take their pick!

Bharatiya Janata Party (BJP) minister Jayant Sinha said candidly in his column that data about formal employment is simply not available; two Indian Institute of Management, Bengaluru professors have made estimates for formal jobs using the number of provident fund accounts (and the increase in this number over the last one year), which indicates robust growth in formal employment. Much more needs to be done to get reliable data on both formal and informal employment. Unfortunately, misreading of survey data, as in Peri’s case, would be counterproductive.

6) It is estimated that in 5 years, GoI has earned Rs. 6.5 lac crores in Petro levies alone. Wonder where all this money has gone?

What is left unsaid in these two statements is this: with the help of these petro taxes, the government has managed to reduce the fiscal deficit of the country from 7.9 per cent of gross domestic product (GDP) in 2009 to 3.3 per cent in 2018. This healthy reduction in fiscal deficit has also helped contain inflation, the worst form of taxation on all citizens, especially the poor, from 10-12 per cent in the UPA era to well under 5 per cent in the last two years. All this while maintaining the street price of petrol and diesel at less than the peak prices in the UPA regime.

Peri surely understands these inter-linkages and what would have happened if the government continued to run large fiscal deficits like the UPA did – a rating downgrade, higher interest rates, higher inflation, lesser foreign direct investment (FDI) inflow, currency depreciation; we had seen all of these and their perilous effects play out in the UPA-2 regime.

The answer to “...where all this money has gone” is available in data points such as budgetary allocation for roads, capital expenditure in railways, and investment in other infrastructure.

9) The export growth of India has been the slowest in decades and is negative now.

These three points pertain to India’s export performance. Unfortunately for Peri, he is a little late in making this accusation; this may have been true in 2016 and early 2017, but not anymore. Please see the quarterly export data for the last 10 years (Source: Trading Economics - India Exports)

As can be seen from the chart, but for the dip in 2016, export performance is fairly healthy before (2014-15) and after (2017-18). While potential export growth in these years is a lost opportunity, alarmist statements like “14-year low” belies a few crucial aspects:

It’s clear then that Peri’s claims don’t live up to the bar set by the Prime Minister for criticising his policies – better research and fact-based criticism, and not wild allegations, are what are required.