Farmer Protests: Carrots Exhausted, But Here’s Why BJP Must Avoid The Stick 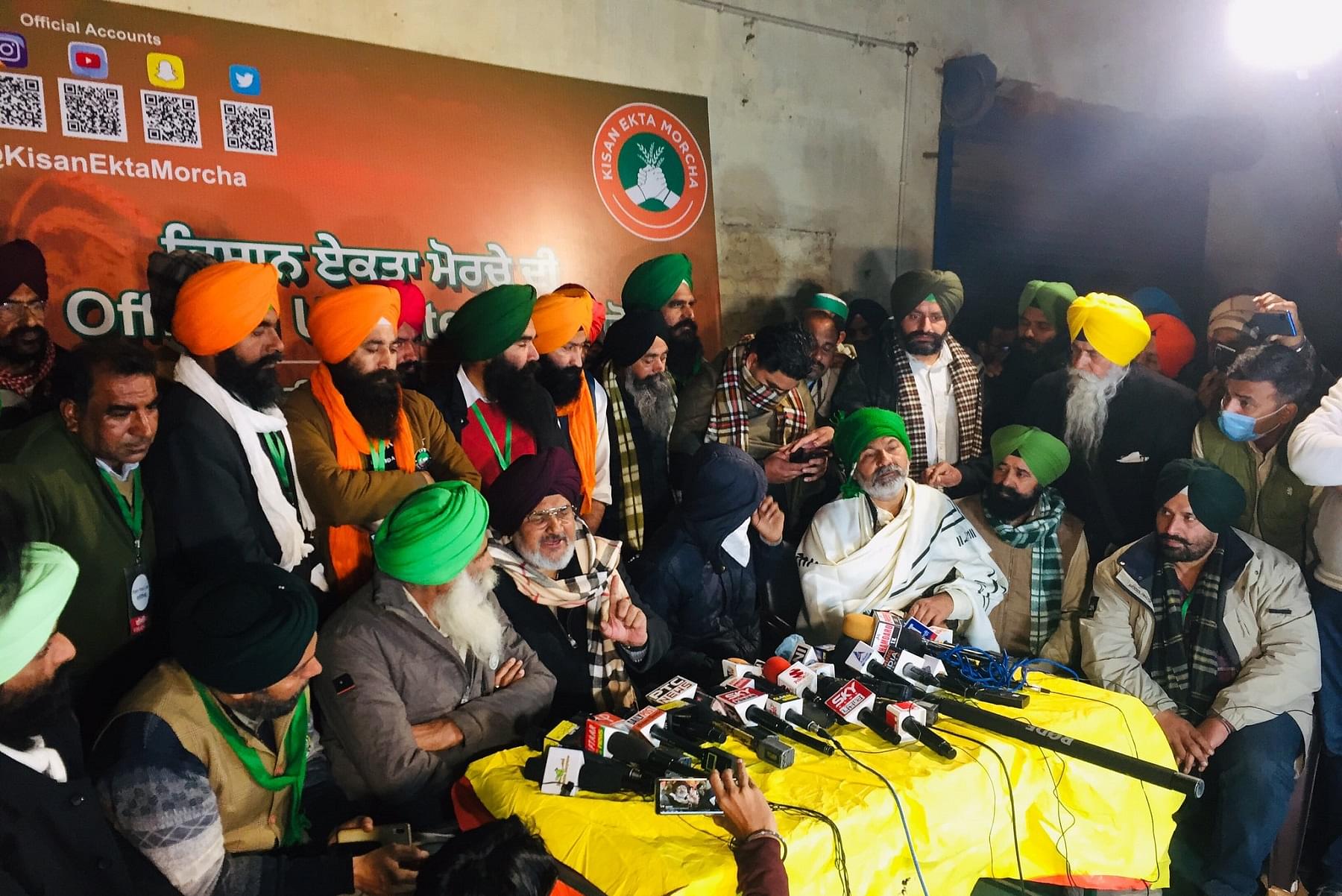 For the protesters at Singhu, the carrots now appear to be exhausted, and a new charade, topping the one already in motion, has begun.

After the eleventh round of discussions in almost two months, the government indicated a lack of intent on the protesters’ end to reach a resolution on the three farm laws, leaving the ball in the latter’s court.

The protesters, cornered by the government on all fronts, embarked on a new path.

Taking a leaf out of the playbook of an overly dramatic sitting chief minister and his party, the leaders of the protest claimed to have a caught a man who was allegedly sent by the government to shoot the farm leaders, incite violence at Singhu, and disrupt the Republic Day tractor rally.

In what was a comic press briefing, the man, inspired by Marvel’s Winter Solider or Zolo, as evident by his mask, claimed that there were 10 other members, including two girls, who had been tasked with the job to incite violence in the otherwise-peaceful protests.

Claims were also made about a person, belonging to a police station, who trained them. However, addressing the media, the man said there was no way for him to identify this cop.

The most dangerous claim made by the man was that he was asked to kill the four union leaders anytime after 23 January. Later, the man was detained by the police for further investigation.

Conspiracy theories aside, the government had offered enough carrots to the farmers before finally giving up on 22 January.

On 9 December, the protesters could have gone home claiming victory after the first set of amendments was announced by the government.

The proposal from the government included a written assurance on MSP (minimum support price), allowed taxing of transactions that took place outside the Agricultural Produce Market Committee (APMC) mandis, denting the apprehensions about the role of private players in demolishing the APMC structures in the long run, and authorised the state to ensure mandatory registration of private players and mandis.

The Centre also allowed legal recourse in civil courts, bending to another demand from the farmers. There was an assurance on electricity subsidy and an assurance to not take stern steps against those who burn stubble.

Moreover, the protesters even rejected deliberating their grievances with a committee mandated by the Supreme Court.

Knowing that they have exhausted the carrots, the protesters created their own version of the stick, as evident from the timing of the press conference last night (22 January).

However, for long, the protesters have been hinting at wanting the stick to win the perception battle.

However justified the use of the stick by the government might be, the protesters aim to sell the narrative of a Hindu nationalist government cracking down on poor farmers of a minority group before the national and world media.

The narrative would then be used to repeal other laws, including the Citizenship Amendment Act and labour laws, and even rekindle the fight to have Article 370 installed again.

Also, it would lead to a policy paralysis as the government would be viewed as that of fascists.

Corporates would be declared as the enemies of the hardworking farmers, with the former eyeing their lands and income.

As incorrect as that perception shall be, it would mean goodbye for structural or any other meaningful reforms.

For the parties invested, it’s about politics and the upcoming elections. For the farmers and middlemen involved, it’s about sustaining the status quo. For the banned organisations infiltrated, it’s about reviving the Khalistani movement.

For the likes of Yogendra Yadav, who have somehow transformed into farmers overnight, as the Joker states, it’s only about watching the world burn.

Therefore, the government must avoid the stick.

Firstly, it must anticipate a situation where the protesters themselves may incite violence and pin it on the forces or the police present and consequently on the government.

A single shot fired at Singhu could lead to an unprecedented situation on the ground, resulting in chaos, or worse, violence.

The government, if it has not already, must deploy sufficient intelligence and forces to tackle the situation. The night media briefing with the ‘masked man’ offered a teaser for the government about how far the protesters can go in inventing the stick and winning the perception battle.

Secondly, the government, as difficult as it may get, must deploy sufficient resources for the Republic Day parade. Even though the route chosen is the one on the otherwise-busy outer ring road, there should be forces to accompany the rally, given we could have scripted incidents of stone-pelting, ink-throwing, and other usual theatrics.

Ironical as it may sound, the government must offer ample protection to the protesters.

The strategy instead must be to tire them out.

While the protesters' credibility is long gone, even the media and social media attention from the protest is beginning to shift. As critical state elections begin, the media coverage would shift, rendering the perception battle null and void.

The timing may be to the government’s assistance here. We are merely a month away from March, and Delhi begins welcoming the summer by then.

For this very reason, a proposal must be made to the farmers to either shift to a designated protesting site or else lose access to electricity and mobile toilets.

The farmers have occupied a national highway of strategic importance, connecting the national capital to most parts of Haryana, Punjab, Chandigarh, Himachal Pradesh, Jammu and Kashmir, and Ladakh.

Thus, the government is well within its rights to cut off the electricity supply to the site and take away other civic amenities. These amenities must only be available to protesters using designated sites and not public spaces, now and in the future.

Alongside, the protest site at Singhu must be plagued with jammers to ward off any further propaganda from the ground.

The apex court also pulled up authorities for not acting timely to remove the protesters.

Thus, even if the above steps come across as inhumane to some, the government would be well within its power to take them, given enough opportunities have been offered to the protesters to negotiate.

North of Singhu, along the Grand Trunk road that runs through Haryana and Punjab, the Central government must ensure a sufficient number of checkpoints to discourage any further blockades.

Already, the GT road is filled with makeshift shelters and eating spots for protesters moving towards Singhu from Punjab. If the state law enforcement agencies refused to cooperate, the Centre must then take assistance from other forces.

While tiring out the supporters, the government should leave the room open for negotiations if the Supreme Court-mandated committee comes back with any further recommendations.

With the stay on the implementation of the laws already in place, it makes little sense for the government to continue beating around the bush with disinterested farming unions.

The ball is well and truly in the protesters’ court now. Overplaying their hand, they have exhausted all the carrots, and as much as they beg, the stick is not coming to help them win the perception battle.

For the government, the ideal thing to do is to deal through the committee of the Supreme Court while tiring the protesters out.

The protesters, however, can continue with their theatrics. Their time and options are quite limited.